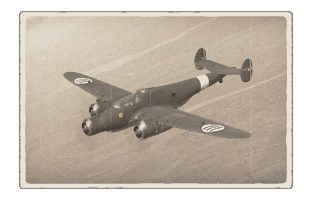 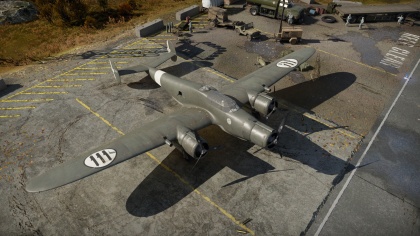 The Z.1007 bis serie 5 is a relatively versatile medium bomber, sacrificing defensive armament and instead focusing on speed in order to avoid interception. It has a relatively decent bomb-load with several options for use against different kinds of targets from AA, pillboxes, tanks to ships.

The Z.1007 bis is a distinct upgrade over the SM.79 series in every aspect. It can carry an extra 6 x 100 kg bombs on external racks in addition to the internal 2 x 500 kg bombs, which is 600 kg more than any of the SM.79 series can carry. This load-out is the best one against bases. It can also carry an extra 250 kg bomb over the SM.79 series for a total of 6 x 250 kg bombs. This payload is better for destroying tanks, but requires precise aim to destroy pillboxes; the 500 kg bombs may be more forgiving if attacking them from altitude. It can also carry a single torpedo for use against shipping.

In order to make up for the weak power output of Italian engines, the Z.1007 bis has the tri-motor configuration characteristic of Italian bombers. The combined horsepower of the three engines provides decent flight performance, but losing even a single engine will immensely degrade it. The Z.1007 bis is also faster than the SM.79 series, which is fortunate because it has a relatively poor defensive armament despite its good coverage. The dorsal turret can cover 360 degrees, but is armed with only one of the relatively weak Italian 12.7 mm machine guns. The beam 7.7 mm guns are effectively worthless, and should not be depended upon. The ventral 12.7 mm machine gun provides limited coverage to attacks from below.

Compared to its earlier predecessor the serie 3 it features a twin tail (Italian: bideriva) and a miniscule better top speed.

Alright maneuverability at slow speeds with a bad roll rate the Z.1007 is a generic medium bomber with expectable performance and decent speed to its name. The elevator starts to slowly lock up above 200 km/h and continues to do so in a linear fashion, however it neatly prevents overstressing and breaking the wings with G-forces. Compared to the S.M.79 it lacks combat flaps and leading slats, increasing the stall speed. Further the Z.1007 also features worse lock up and comparable maneuverability. Fortunately the acceleration and top speed are far better, yet the Alcione will not outrun any fighter or heavy fighter, too.

Being an all wooden design and designed as a fast bomber the Z.1007 lacks any sort of protection and solely relies on its speed to survive on the battlefield. Despite the lack of armour it takes a few shots to pilot snipe from the rear as in the narrow fuselage the gunners act literal meat shields, quite macabre.

The Z.1007 bis serie 5 can be outfitted with the following ordnance:

Many payload option utilize the wing mounts and consequently reduce the crucial top speed. However only using the internal bomb bay limits the ordnance to a mere 1100 kg total. Depending on load-out option the external bombs may even drop last e.g. the heaviest last one. In average a single Z.1007 can take out 1.5x bases in an uptier and close to 2x in a downtier. Noteworthy is the internally mounted torpedo. The F200/450 is with a drop speed of 300 km/h @ max. 100 m altitude (273 f/s @ 328 feet) quite mediocre, but features a very high in water speed of 80 km/h (73 f/s).

Worse than average the defensive turrets can only boast decent firing arcs, ventral and dorsal turret feature overlapping rear fields of fire. However a frontal gun is missing entirely and is only covered by turning the dorsal turret by 180° which takes time.

Lacking in both defensive armament and protection, not to mention blessed with early control lock-up speeds the Z.1007 is pushed into the role of a hit-and-run bomber. Either against ground bases with mediocre success or as ground support against stationary ground units and armoured columns. The latter option is quite viable with mutliple drops available per run depending on the load-out, learning the drop order of the payload allows to maximize the effect of each bomb by selecting the approbiate target in ground strike missions.

The biggest difference between the serie 5 from the serie 3 is the twin tail configuration on the serie 5, which eliminates the dorsal turret's dead-zone created by the earlier's single tail. Other than that, they are virtually identical.

One of the three standard Italian wartime bombers, alongside the S.M. 79 and the B.R. 20, the Z.1007 had speed, armament, good range, and an acceptable bombload. It was used on all Italian fronts despite being of all-wood construction. Also known as the Alcione, it was designed by Filippo Zappata and built by Cantieri Aeronautici e Navali Triestini (Trieste Shipbuilding and Naval Aeronautics), with the prototype debuting in spring, 1937. After 34 original models, production shifted to the bis model, with a more powerful radial engine; over 400 of this model would ultimately be built. They conducted combat tests with Italian forces in Belgium during the Battle of Britain in September, 1940, used for diversionary actions only. Their real combat debut was a month later, during the Greek campaign. They also flew in Africa and the Mediterranean. They were not used much in Russia. A total of 560 were built, with about 60 still in service when Italy surrendered. About 30 continued on after, now in Allied service, in the Balkans.