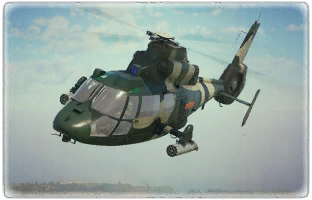 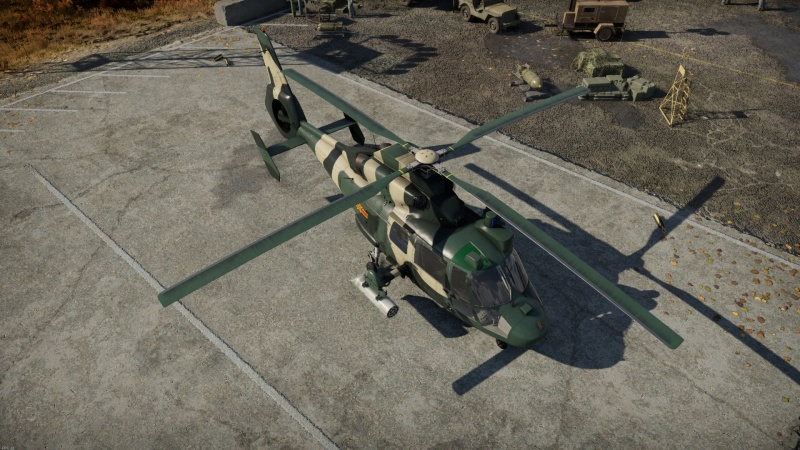 The Z-9W is a rank VI Chinese attack helicopter with a battle rating of 9.3 (AB/RB/SB). It was introduced in Update "Drone Age". It is known in the Chinese community as 海豚 "Haitun" (Dolphin).

The Z-9W is a ground attack variant of the Eurocopter AS365 Dauphin helicopter, which was license produced as the Harbin Z-9. The "W" in the designation means 武装 (Wuzhaung; armed) and it was one of the earliest dedicated attack helicopters of the PLAGF Aviation Corps. The handsome appearance still greatly resembles the original Dauphin, the modifications being a pair of hardpoints on the side doors and optical systems mounted on the cockpit roof for observation and directing ATGMs.

In War Thunder, the Z-9W offers a comfortable transition from the starting Z-11WA while bringing some powerful new toys. The Dauphin airframe has excellent agility and can make aerobatic maneuvers with ease. Its CAS capabilities are enhanced with a high-zoom optical camera, a ballistic computer, an improved HJ-8C missile, and 23 mm autocannons. It also introduces the infamous TY-90 AAM, which allows the Z-9W to serve as a makeshift "flying SPAAG". Thus, the Z-9W is a versatile and enjoyable helicopter that can be used for CAS, counter-CAS, or a bit of both.

The main usage of the Z-9 in real life is for transport, though its airframe does support armed operations to some extent. It is noticeably larger than the Z-11WA and SA.342L Gazelle but that does not hinder its mobility, courtesy of its twin engines. In fact, it is faster than the Z-11. The tiny and sleek Gazelle still has an edge in acceleration and top speed but the Z-9W has superior roll and pitch characteristics to both helicopters, making it terrifically agile. This is helpful for both close-quarters maneuvering and dodging incoming fire at a distance.

A very bad news for the Z-9W is that, due to its design as a transport helicopter, there is no protection between the pilots other than the windshield or airframe skins. Like its tech-tree predecessors, any projectile that penetrates the airframe is more than enough to knock out the crew with ease. Although it has a self-sealing tank, the Z-9W is still very likely to burn before it has a chance to fly back to its airbase or for the fire to stop by itself.

The Z-9W can be outfitted with the following ordnance presets:

The Z-9W's anti-tank armament consists of the HJ-8 missile in two variants. The HJ-8A missile is still available, but it has worn out its welcome by now and should only be used when stock grinding. The improved HJ-8C is the Z-9W's main anti-tank weapon. It unfortunately does not have an improved rocket motor, so the 3 km range and 250 m/s flight speed leave much to be desired, but it has a new warhead with a tandem charge and 590 mm of penetration. Although the raw penetration is below average and may not be enough against composite armour, it is enough to consistently deal with steel-armoured tanks and the tandem warhead's anti-ERA properties give it a more mileage: it can actually penetrate the T-72B's hull in situations where the HOT-2 TOW with 900 mm of penetration might have issues. The Z-9W's incredible camera zoom of up to 81.8x allows ATGMs to be aimed with very high precision, which makes it feasible to target weak points or even ammo racks.

The Z-9W is the earlier Chinese helicopter capable of carrying TY-90 air-to-air missiles. Made famous by the premium Z-19E at a whole battle rating higher, the Z-9W often wields them against aircraft that do not even have the speed or countermeasures to try dodging them with. That said, they are not guaranteed kills and the user still needs to wait for a decent launch envelope and provide enough lead for them to do their work.

Two types of rocket pods are again available. The stock Type 57-1 rockets are still underwhelming in damage and velocity, but the Z-9W has a ballistic computer and the CCIP functionality makes them far easier to use, and they are credible threats to lightly armoured ground targets. The Type 90-1 rockets (the same type seen on the Q-5 early attacker jet) are slightly weaker than the FS70 rockets seen on the Z-9W's predecessors in penetration and TNT equivalent, but their 700 m/s flight speed makes them easier to aim and they are still significantly more damaging than the 57 mm rockets.

The Z-9W has two options for gun armament, both available stock: the unexciting 12.7 mm machine gun pods return for harassing lightly armored vehicles or enemy helicopters, but the 23 mm Type 23-1 cannons are new options. The cannon has less ammunition and fires more slowly, but its AP rounds have enough mass to generate spalling and cause significant module damage and are thus more effective against ground targets than the machine guns. It also has HEFI-T rounds that will make short work of enemy helicopters if they hit. Still, they are less powerful than the 20 mm cannons used by NATO helicopters and take up a hardpoint that could be used for rockets or missiles instead.

Players of Chinese helicopters will soon find out that the Z-9W still lacks any form of fixed weapons (only the Z-10 has a chin Type 23L turret) and the gun pod/cannon options occupy valuable hardpoints. The Z-9W can still be used for sneaky ATGM attacks as pioneered with the Z-11WA, losing thermal optics in exchange for new HJ-8C ATGMs that pack a more serious punch. The new ballistic computer allows the Z-9W to be more successful in short-range attacks as well, but it unfortunately lacks the high rocket capacity of the AH-1 Cobra or Hind families to make this a primary strategy. Try to maintain stealth and attack from unexpected areas, because the HJ-8Cs still have limited range and slow travel speed. Be alert for incoming SPAA fire and use the Z-9W's excellent control authority to dodge and retreat, because its larger size is a detriment when standing still.

The TY-90 is infamous for its extreme manoeuvrability against aircraft and will easily send enemy CAS back to the hangar, allowing the Z-9W to provide air defense in exchange for some or all of its air-to-ground capability. For a pure "flying SPAA" role, it is viable to take the maximum of four TY-90s and circle around the battlefield at low altitude to lie in wait near the enemy helicopter base or air spawn. While this loadout makes the Z-9W completely harmless to ground vehicles, it is easy to destroy multiple enemy aircraft soon after they spawn and thus protect teammates from dangerous CAS. It is important to use the terrain to avoid attention from enemy SPAA and maintain an element of surprise — the TY-90 is dangerous by itself, and the unseen TY-90 is the deadliest.

Depending on player's needs, custom loadouts with HJ-8s and TY-90s are good for taking down a few enemies before rearming thanks to their sufficient damage to their specified targets, while options with cannons and either ATGMs or AAMs are a good choice between gunning down fixed targets in helicopter EC while taking down SPAAGs/aircraft from a safer distance.

The overall detail for the purchase of the license for AS365 is yet to be determined, HAIG documented that Mainland China done a contract with France on 15 October, 1980. The CKD version of the Z-9 was then passed for commission in 1983 and first shown during the 1987 Paris Airshow along with other aircraft of HAIG, later versions of the Z-9 passed for certifications in 1989[1], but it was only 1993 when HAIG finally built the fully domestic version of Z-9B. Since then, the Z-9 has been one of the major forces of the PLA helicopter corps with many different variants for both PLAGF and PLAN, as well as PAP (People's Armed Police; 武警); the development of Z-9W was started as soon as 1985 when CMC requested for a new attack helicopter with ATGM by 1990, where the conversion of Z-9 started in late 1986 where HAIG and CAIC were involved in it. Z-9W first flew on 1988/10/31 and completed its fire-range tests in early 1989 which installed upgraded electronics and revised airframe with carbon fiber stabilizers.

The Z-9W is also the base for later Z-9WA with better avionics and payload thanks to revised pylons that were bolted onto the airframe instead of a built-in pylon.