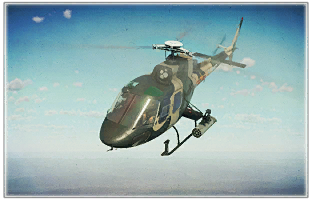 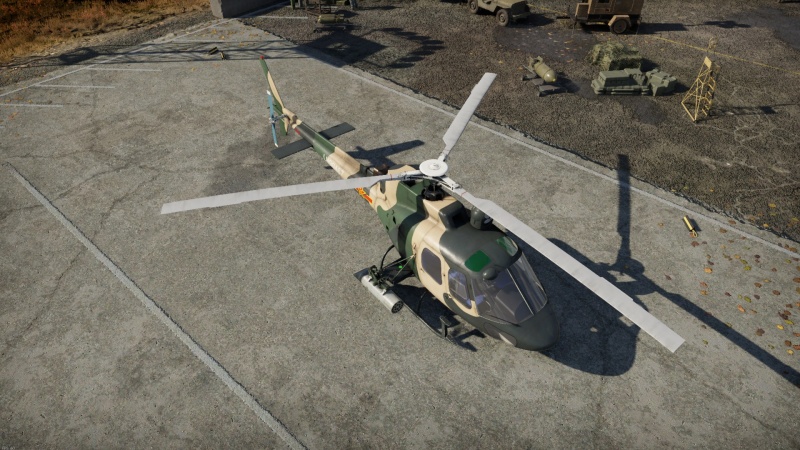 The Z-11WA is a rank V Chinese attack helicopter with a battle rating of 8.7 (AB/RB/SB). It was introduced in Update "Drone Age".

The Z-11WA is the first Chinese helicopter in the main tech tree. The Changhe Z-11 is a light helicopter closely resembling the French AS350 Écureuil (Squirrel) with minor detail differences, and this reconnaissance/light attack variant has been augmented with a prominent sensor orb above the cockpit. It has a rather high battle rating for a starter helicopter, but offers good flight performance, a small size, and very early access to thermal optics. Its main drawback is the limited arsenal consisting of domestic HJ-8A ATGMs, 57 mm and 90 mm rocket pods, and 12.7 mm machine gun pods. This helicopter is best used sneakily, locating targets from afar and creeping closer to attack from unexpected angles.

As its unofficial (French) nickname Écureuil suggests, the Z-11WA performs like a flying squirrel. Thanks to its small yet agile airframe, it is among the fastest helicopters at its tier when unarmed (at 274 km/h spaded); while its designation of being an armed scout helicopter also ensures its limited but sufficient payload in case of harassing enemies with pairs of HJ-8A ATGMs, 12.7 mm gun pods, and rockets of different calibres. This will of course hinder its top speed - but there are helicopters at higher tiers which have even slower top speeds, so making good use of the top speed to sneak into the battlefield and leave as soon as your munitions are depleted is the key to utilising the Z-11WA.

A very common feature of a scout helicopter like the Z-11WA is the lack of any form of armour - even rifle-calibre bullets are lethal to it. The only good news is that the fuel tank is a self-sealing tank; although it is very unlikely that it can survive sustained burning, it still gives Z-11WA the bare minimal chance to leave the battlefield.

The Z-11WA can be outfitted with the following ordnance presets:

The Z-11WA's primary anti-tank weapon is the HJ-8A missile. The HJ-8 is a Chinese man-portable ATGM system with comparable weight and statistics to the Soviet 9M113 Konkurs. It weighs much less than typical starter helicopter ATGMs like the SS.11 and 9M17M Falanga and has a slightly faster flight speed, but the smaller size also limits penetration power and range. The single charge warhead with 480 mm of flat penetration is enough to get the job against most tanks but is easily stopped by ERA and the post-penetration damage can be inconsistent. The 3 km range puts the Z-11WA near the effective range of radar-guided SPAA. Finally, only four HJ-8As can be carried in total, but two can be carried as a stock loadout.

Two types of rockets are available. The stock option is the Type 57-1 rocket carried in pods of 18. These have poor penetration, flight speed, and accuracy, the only selling point being their large capacity. The FS70 rockets have a much smaller capacity of only 7 per pod, but they hit much harder (same penetration and more explosive content than the BMP-1's main gun). Since the Z-11WA has only two pylons and lacks a ballistic computer, the rockets are mainly useful as backup ground attack weapons for stock grinding before the full HJ-8A loadout is unlocked, although players who are very comfortable with aiming rockets by eye may be able to use them for surprise attacks.

The 12.7 mm machine gun pods are the only guns available to the Z-11WA. They are not powerful enough to be serious ground attack options but have enormous ammunition capacities and can be helpful in a helicopter dogfight. Pick belts with a high proportion of AP-I rounds, because they have a surprisingly high penetration for their calibre.

As the very first helicopter of the Chinese helicopter tech tree, the Z-11WA already has an ace up its sleeve: this variant is from 2004 and it is the only helicopter with a TVD camera at its tier (installed with the on the left side above the co-pilot). Players will also be happy to utilize the relatively high speed and agility of the Z-11WA for quick assaults on enemies with its sufficient payload for a scout helicopter: ATGMs, rocket pods, and gun pods. However, it does not provide much flexibility against enemies in case of helicopter EC due to its lack of fixed machine guns onboard. The lack of a ballistic computer also means players must practice with the new FS70 rockets or its stock Type 57-1 rockets to successfully hit ground targets, especially when flying at high speeds. Another flaw is the relatively short range, unimpressive capacity, and slow speed of the HJ-8A ATGM, although it is sufficient to take down armoured targets at its tier, this also means that players have to risk themselves to be closer to the heat of the battlefield as it doesn't have any protection against projectiles. For comparison, the contemporary UH-1C can carry up to six superior I-TOW ATGMs.

With these in mind, players of the Z-11WA can utilize it as an "aerial guerrilla" and hide behind terrain or barely above the treeline, make sure to make good use of its TVD camera with good magnification to scout for enemy targets; while the 2 pairs of ATGMs onboard can take down enemies from safer distances. As soon as enemy aircraft or SPAAGs are in business, leave the battlefield and stay alive as long as possible with its agility and small size.

After the introduction of some French helicopters from Aérospatiale, including the SA.342L Gazelle and AS365 (later Z-9 after domestic production) since the 1980s, the PLAGF was in need for completely domestic helicopters. While claimed to be a domestic design, the Z-11 has a close resemblance to the AS350 Écureuil in terms of its aerodynamic design. The first prototype was flown on December 1992 and was later introduced into service in 1994 as the first domestic scout helicopter of the PLAGF. The armed version, Z-11WA, was introduced in 2004 with limited air-to-ground weapons, while the later Z-11WB in the mid-2010s were armed with more advanced missile options. Aside from its military variants, Z-11 also has civilian versions including its later variant AC311 from early 2010s.