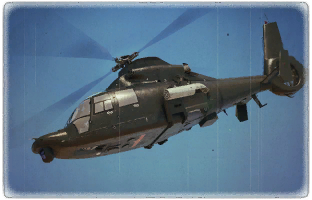 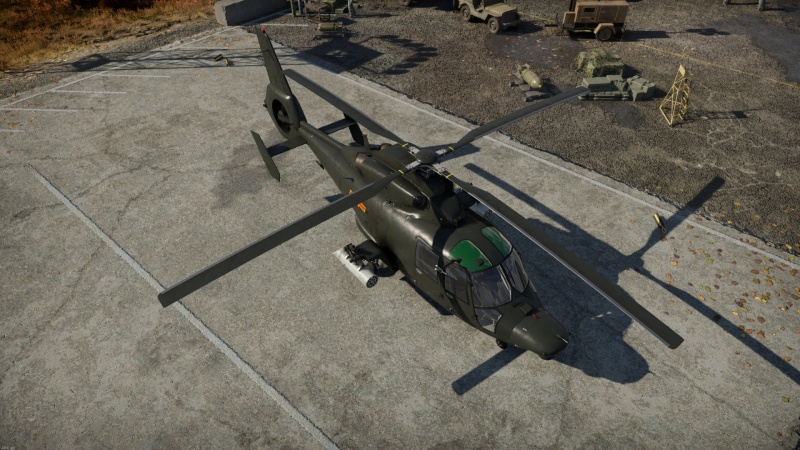 The Z-9WA is a rank VI Chinese attack helicopter with a battle rating of 9.7 (AB/RB/SB). It was introduced in Update "Drone Age".

The Harbin Z-9 is commonly known to the Chinese community as 海豚 "Haitun" (Dolphin) as it is based on the French Eurocopter AS365 Dauphin. This revised version of the Z-9W comes with better avionics and upgraded firepower thanks to a set of revised pylons. While it still lag behind counterparts at its BR due to its original design as a transport helicopter, the armament onboard is available in greater numbers and allows the Z-9WA to still stand a chance against enemy targets with better ATGMs and more AAMs.

The overall appearance of the Z-9WA is quite similar to the previous Z-9W other than the shiny black camouflage, rearranged optical trackers (from the top of cockpit to a position under the nose), and redesigned details in the cabin and cockpit. On top of the upgraded weapons and payload capacity, the Z-9WA has new systems such as thermal optics, MAWS, and countermeasures that make it better at hunting tanks and more slippery against enemy air defenses.

The Z-9WA shares a similar mobility to the Z-9W as it didn't receive a powerplant upgrade. It does not have the speed of dedicated attack helicopters but still retains the classic high agility of the Z-9 family. The installation of the new armament and electronics does not cause significant performance reduction, and it can still be utilized to sneak behind enemy lines and strike them from the rear.

Players of the previous Z-9s will be extremely familiar with the overall protection of the Z-9WA: this version still doesn't provide any extra protection against projectiles or shrapnel from enemies. Any hit will very likely cause damage to component or the pilots; but it still comes with self-sealing fuel tanks that might help survive if set ablaze.

The Z-9WA is armed with:

The Z-9WA is the first Chinese helicopter to have flare/chaff countermeasures, and the supply of 72 is in fact more generous than the later Z-19 and Z-10. An onboard MAWS makes it easier to use these countermeasures.

The Z-9WA can be outfitted with the following ordnance presets:

The Z-9WA's primary weapons are still the HJ-8 ATGM and the TY-90 AAM, but the improved stub wing hardpoints allow the Z-9WA to carry double the missiles of its predecessor, up to eight total. The stock loadout of four ATGMs already matches the full anti-tank armament of the Z-9W, which eases the stock grind greatly.

The HJ-8 missile now comes in two improved variants. The stock HJ-8E is a significant improvement over the humble HJ-8A used by previous helicopters: it has the same warhead as the HJ-8C with a tandem charge and 590 mm of penetration, and now an improved rocket motor that boosts the range to 4 km and improves the flight speed slightly to 260 m/s. The HJ-8E packs an adequate punch against tanks with steel or reactive armour but might have issues against composite armour because of its below average raw penetration. The unlockable HJ-8H has an improved warhead with 750 mm of penetration that largely fixes this issue, and also has improved TNT equivalent for destroying light targets through overpressure. Among contemporary helicopter ATGMs, the HJ-8H is most similar to the HOT-2 TOW: both have good ranges (greater than BGM-71D TOW-2, less than 9M114 Shturm), slow flight speeds (less than TOW-2 and half that of the Shturm), and powerful warheads. The HJ-8H has 150 mm less raw penetration than the HOT-2, but the tandem charge allows it to consistently destroy common Soviet ERA-equipped tanks like the T-72B and T-72AV (TURMS-T), very impressive for a missile that only weighs 13 kg.

The TY-90 returns as a highly effective air-to-air missile that can take down even manoeuvring fighters. If the Z-9W's capacity of four TY-90s was enough to act as a "flying SPAA", the Z-9WA's eight TY-90s are enough to suppress enemy aircraft for an entire match. It is also effective against helicopters, but it is important to remember that many of the Z-9WA's contemporaries have HIRSS or IRCM systems that make them more difficult to lock, and some like the Mi-24P have dangerous missiles too.

The other armament options of unguided rockets, machine gun pods, and cannons are the same as on the Z-9W. However they should only be seriously considered for the initial stock grind when only one hardpoint of HJ-8Es is available. The Z-9WA is still not suitable for close-range combat due to its fragility, limited hardpoints, and lack of an internal cannon, especially since it can face advanced SPAA vehicles.

Players will easily get on hand with the WA variant thanks to its mostly identical flight performance and very similar weaponry to the Z-9W. The Z-9WA has an unrivaled TVD camera with very high magnification at x81, which is very helpful for those who struggle to find targets in an intense battlefield, compounded by bad weather or night conditions. What really hinders Z-9WA is its ATGMs, which despite improvements only fly at 260 m/s, which is still slow for this BR. The HJ-8s do pack a punch upon impact, but potential targets have a long window to spot them and either deploy smoke or move to cover. Thus, it is best to sneak around the battlefield at low altitude and find a good angle to attack enemies from the side or even behind, where they are less likely to see the Z-9WA and incoming ATGMs. The Z-9WA's lack of an auto-tracker also can make it difficult to hit fast-moving vehicles. Thus, the easiest targets are those that are camping or pinned down in cover and not paying attention to the sky.

The TY-90 is the same as all its predecessor/successors with its extremely good manoeuvrability. Targets in its range are unlikely to escape their fate of being blown out of the skies by this 20 G overload missile, even with flares. The usual TY-90 tactics and strategy apply: attack from unexpected angles such as behind and below enemy aircraft for best results, and supply the missile some manual lead after the seeker acquires the target as insurance against defensive manoeuvres. While there are rocket pods and gunpods at your disposal, they are more efficient at helicopter EC for light targets such as recoilless guns, light tanks, APCs, etc.

It is important to be on guard for incoming threats. Pilots who move closer to the battlefield to compensate for the HJ-8's slow flight speed put themselves at greater risk from SPAAGs and IR-guided SAMs. Even hanging back 4 km from the front lines does not guarantee safety, because a slight uptier is enough for the Z-9WA to face powerful radar SAM systems such as the FlaRakPz 1 and Roland 1 that seriously outrange and outspeed all of the Z-9WA's weapons. If such enemies are around, pay attention to the MAWS. If it sounds an alarm, deploy chaff, make evasive manoeuvres, and try to break the line of sight before leaving the area to reposition. The Z-9WA also has a LWS that is less useful given that laser-guided weapons are uncommon at its battle rating, but it is still nice to have. Look out for aerial threats as well, because although the Z-9WA can actively hunt jets with TY-90s, attacker aircraft like the Su-25 and A-10A have agile all-aspect missiles of their own and can return the favor.

Like the Z-9W, make sure to sneak around in the battlefield for maximum survivability as it is still unprotected; but thanks to better avionics, it will have a faster searching time than predecessors and helps a lot for staying out of the battlefield. Alternatively it can still serve as another "flying SPAA" and make sure that enemy aircraft will hit the ground before they have the chance to do damage to your team. The Z-9WA can also be a serious multirole helicopter because of its enhanced payload: for pilots who want to be prepared for anything, one pylon of four ATGMs and one pylon of four TY-90s is enough to perform some solid anti-aircraft work while being a credible tank hunter.

The Z-9WA is the upgraded version of the Z-9W with revised pylon that was bolted onto the airframe instead of going through the main airframe itself, a new 3-in-1 tracker with daytime/TVD/laser tracking and some revision on the nose of the helicopter. The project was started in November 2001 and contracts were signed in January next year, first seen as part of the PLA Hong Kong Garrison Aviation Corps at Shek Kong Airfield (石崗機場) in the early 2000s. The Z-9WA was the dedicated attack helicopter of PLAGF Aviation Corps before Project 941 (Z-10) until the Z-9WA's successor, the Z-19, came into service.