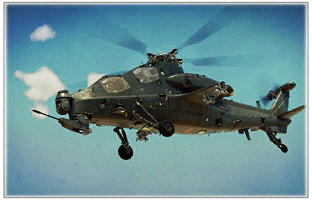 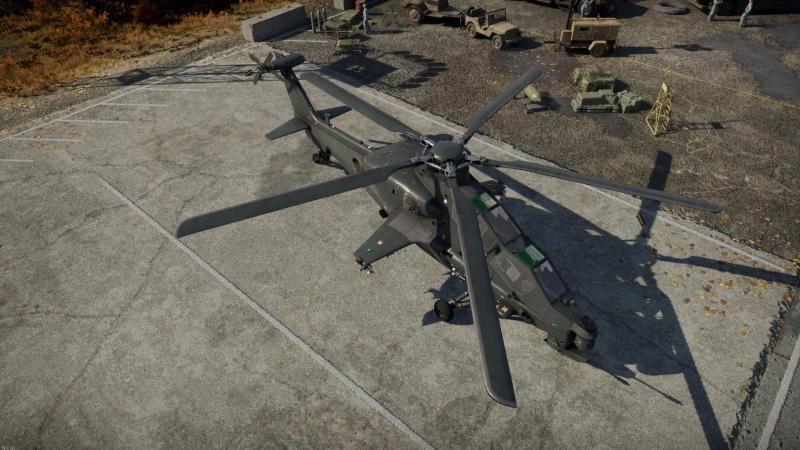 The CAIC Z-10 has a sleek and futuristic appearance. It is the first full-fledged attack helicopter in the Chinese tech tree, finally having armour protection and an internal gun. The ordnance is mostly the same as the Z-19, but it can now use full-size AKD-10 laser-guided missiles that pack an enormous punch against tanks. However, this is an early production version with WZ-9 turboshaft engines that are somewhat lacking in power. Its flight performance is underwhelming, it cannot carry as many ATGMs as its peers, and it lacks the Z-19's mast-mounted radar. But with some finesse from the pilot, the "Fierce Thunderbolt" can still be a threatening combatant with advanced electronics and powerful weapons.

The Z-10's engines are more powerful than the Z-19's, but that is not enough to offset the increased weight and size. It has a lower top speed than contemporaries like the AH-64D Apache and Ka-52 Alligator. Manoeuvrability is decent but the flight model feels unstable at times, and rapid aerobatic manoeuvres that could be easily done on the Z-19 should be avoided on the Z-10. It does have an impressive maximum altitude of 6 km that matches the AH-1Z, but there is rarely a reason to venture that high.

This initial model of the Z-10 has light protection, but any protection is still a welcome improvement over previous Chinese helicopters. The crew members are protected with thick bulletproof glass that resists machine guns and autocannons from the front and their seats are armoured, which is a similar level of protection to the Italian A129CBT. There is nothing protecting the engine or crew compartment, which makes the Z-10 more vulnerable to shrapnel and explosive rounds.

The Z-10 is the first Chinese helicopter with an internal gun. Mounted on a turret under the nose, the 23 mm Type 23L cannon performs similarly to the Type 23-1 cannons seen on the Z-9W/WA. The rate of fire and penetration are lacking compared to its peers and it should not be expected to chew up ground targets in the same way as the Apache's 30 mm chaingun or the Havoc's literal IFV autocannon, but it is easy to use because of the fire control system's CCRP and can help dispatch nearby aircraft. An Armored Targets belt with entirely HVAP rounds is available: although it lacks FI-T rounds for breaking apart aircraft, it has more penetration (up to 61 mm, enough to harass light ground vehicles) and a best-in-class 1240 m/s muzzle velocity.

The Z-10 can be outfitted with the following ordnance presets:

The Z-10 starts off with AKD-9 missiles as a stock option. Players who have used the Z-19 or Z-19E will be very familiar with these: lightweight laser-guided missiles with top-attack, lock-after-launch, and salvo firing capabilities like the Hellfire, but below average penetration, range, and flight speed.

However the Z-10's main air-to-ground weapon is the AKD-10, the full size version of the AKD-9 that is superior in all respects: 1,400 mm of penetration makes it the most powerful ATGM in War Thunder (slightly edging out the ZT-6 Mokopa), the 6.25 kg of TNT equivalent will further seal the fate of light vehicles, and the range has been improved to over 8 km (10 km launch range). Unfortunately, the flight speed has only been negligibly improved, which is the sole remaining flaw.

The ATGMs can only be mounted on the outer pylons, so the Z-10 is limited to 8 in total. This is half the amount of most contemporaries.

The TY-90s are a welcome tool for swatting aircraft and are a great way to fill in the remaining pylons. Moreover, the Z-10 can mount TY-90s on any of the four pylons and not just the inner pylons, making it possible to carry a ludicrous sixteen TY-90s at once — a record number of air-to-air missiles for any aircraft.

The remaining options of unguided rockets and machine gun pods should be familiar. The Z-10 can do some damage to ground targets in rocket rushes, but its unstable flight model discourages this kind of use as a first choice. The rockets have some utility if used to trigger the proximity fuses of incoming HE-VT rounds or SAMs as a last-ditch defense, but this may or may not be worth sacrificing a pylon of TY-90s for. The machine guns should be ignored because they are both weak and inferior to the Z-10's own internal cannon.

The Z-10 has some powerful weapons at its disposal: the AKD-10 ATGMs have the highest penetration of any ATGM in the game and can take down even the most heavily armoured MBTs, and the TY-90s remain very adept at destroying jets, even in the face of top-tier supersonic aircraft. It retains the crisp thermals and high-zoom optics from the Z-19 for ease of aiming and target acquisition. Although it can sit back and sling ATGMs from long range, the Z-10 can also operate more comfortably near the front lines with bulletproof glass and an internal cannon. Sadly, it is held back by the low flight speed and capacity of its ATGMs, a limited supply of countermeasures, and an awkward flight model. Flying the Z-10 effectively in the face of enemy SAMs and air cover requires constant situational awareness.

Since the AKD-10 has the same technology as its smaller sibling, it is possible to mitigate the low flight speed with similar practices employed on the Z-19. The lock-on after launch (LOAL) and salvo abilities can be used to lob a sequence of missiles towards the battlefield even when things are quiet, with ample time to acquire and designate targets when they appear. It is also possible to use LOAL to engage SAMs by hiding in cover for most of the flight duration. Although the AKD-10 has much greater post-penetration damage than the AKD-9, players who want to make the most of the limited ATGM capacity can still change the laser designator aim point to hit roof armour if desired.

The Z-10 remains highly effective as an air superiority helicopter. Just like the Z-19, it can carry eight TY-90s without sacrificing ATGMs, and this is sufficient for most battles. The cannon can be used as a supplement for close combat against enemies that appear suddenly and are too close for missiles or extensively pre-flaring. Players who wish to become a flying no-fly zone can take sixteen TY-90s for the largest AAM loadout in the game, but this is rather excessive unless the enemy team is fielding tremendous numbers of aircraft and drones. Players transitioning from the Z-19 should be aware that the Z-10 has a harder time pulling violent manoeuvres to dodge incoming fire and does not have a mast-mounted radar for spotting low-altitude aircraft.