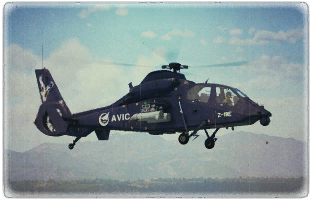 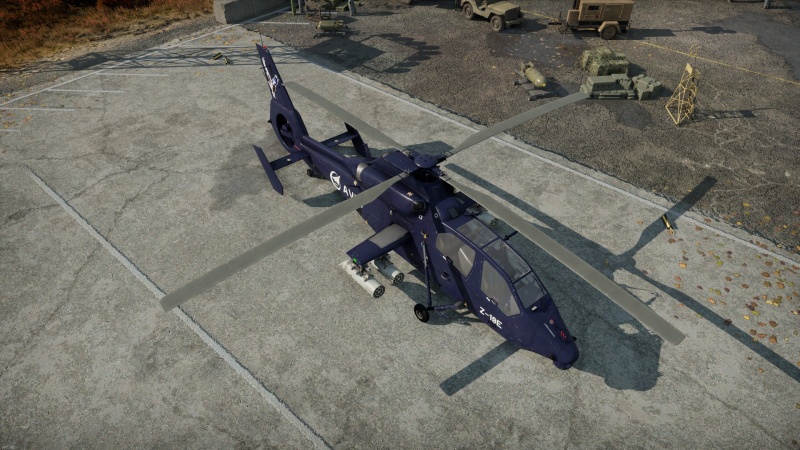 The Z-19E is a premium gift rank VI Chinese attack helicopter with a battle rating of 10.3 (AB/RB/SB). It was introduced in Update "Danger Zone".

The Harbin Z-19 is a light reconnaissance and attack helicopter. It was originally developed on the basis of the French SA 365 Dauphin (license produced as the Harbin Z-9), whose heritage can be seen in the engine section and distinctive Fenestron tail, but the Z-19 has an all-new forward fuselage with tandem seating for a pilot and gunner. This transformation is reminiscent of the relationship between the AH-1 Cobra and UH-1 Huey. The Z-19E here is an export variant with increased use of composite materials.

The Z-19E brings a lot to the table. The flight performance is great and it can perform aerobatic manoeuvres that many contemporaries could only dream of. The Z-19E's main anti-tank weapons are laser-guided BA-9 ATGMs that function as lightweight equivalents of the AGM-114B Hellfire with shorter range and less penetration, assisted by excellent optics and high quality thermal sights. Countermeasures and a missile approach warning system make the Z-19E a slippery opponent for enemy air defenses. But a standout in its arsenal is the TY-90 air-to-air missile, designed specifically for helicopter use. With high agility, a 6 km all-aspect lock range, and flare resistance, the TY-90 is the last word in helicopter anti-air capabilities and can easily swat other helicopters and even manoeuvring fighter jets from the airspace. Carrying up to eight TY-90s, the Z-19E can uniquely function as an air superiority helicopter!

The most iconic feature of the Z-19E is the tail rotor based on its technological and tactical predecessor Z-9WA, a modification of licensed French Dauphin. The overall size of the Z-19E is also small compared to helicopters at its rank. Although it might not be the fastest helicopter, one thing for sure is its superior manoeuvrability - even the PLAGF's aerobatic team opted for the domestic version of the Z-19 as their performance aircraft - making it easier to perform sudden strikes upon enemies and dodge gunfire or even missiles.

If one thing is certain for many scout helicopters, it would be the subpar protection. Due to its lightweight nature, Z-19E only offers composite material (Kevlar-Boron carbide) by the pilot seats; while this 20 mm layer might be enough for rifle calibre bullets or fragmentation, anything larger than .50 calibre would certainly penetrate it with ease, let alone autocannons.

The Z-19E can be outfitted with the following ordnance:

The Z-19E has a decent variety of armaments to choose from. As discussed before, the two most important offerings are the BA-9 ATGM and the TY-90 AAM.

The Blue Arrow 9 (BA-9) can be considered a smaller AGM-114B Hellfire, as a semi-active laser guided missile that can also follow a lofting flight trajectory and can lock-on-after-launch (LOAL). However it has a 25% shorter range, only 800 mm of penetration akin to the Soviet 9M120 Ataka, and a lower flight speed by around 30% than the Hellfire. Although the BA-9 is nothing special compared to its contemporaries, it still gets the job done against most tanks, particularly if it is able to hit them from above. Multiple missiles can also be launched at the same target if the need arises.

The TY-90 is an excellent air-to-air missile purposely designed for use by helicopters, in contrast to the typical adapted MANPADS such as the ATAS (AIM-92) and 9M39 Igla used by most helicopters. It tracks well, pulls hard, and is very resistant to flares. A successful hit will usually bring down aircraft in one hit because of its 1.5 kg warhead, three times as large as a MANPADS. The TY-90 has few issues in shooting down enemy CAS jets above the battlefield. It can handle opposing helicopters as well, but their lower thermal signatures can make them more difficult to lock.

Two types of rockets are available: Type 57-1 and FS70. The 57 mm Type 57-1 HEAT rockets have the highest capacity of 18 per pod, but have flight speed and explosive mass. The 90 mm Type 90-1 HEAT rockets have a larger explosive mass and twice the penetration, but only 7 can be carried per pod and their flight speed is slightly slower. Neither rocket has enough penetration to reliably dispatch MBTs from the front, so hits to the side or roof armour are better suited.

The last weapon available is are gun pods each containing a single 12.7 mm machine gun with 1,000 rounds each. They compensate for the Z-19's lack of an internal cannon, but the machine guns are also too weak to do any real damage to ground targets and the TY-90s are far better against air targets, making them more of a novelty than a practical choice.

At first glance, some players might underestimate the Z-19E for its relatively small size, but it can still carry 8 ATGMs and AAMs at once, a rather sufficient payload for a scout helicopter and still flying with exceptionally good agility. Some even call the Z-19E a "flying SPAA" which represent its greatest feature: the TY-90 IR AAMs. They are among the best AAMs for helicopters and even careful pilots will find their manoeuvrability an ultimate nightmare, especially its 6 km all-aspect acquisition range and 20G overload. Even jets at supersonic speed will have the chance of being shot down by it; its resistance against flares also makes it one of the most reliable missiles among all IR AAMs. For the BA-9 ATGMs, while it might not be the best ATGM at its tier with its relatively slow speed and high trajectory, a top-down attack can make sure the target will suffer fatal damage given players don't hit the enemies' composite/ERA-covered parts. The BA-9 can even be used as a makeshift AAM when the TY-90 missiles can't acquire a lock, able to hit long-range hovering helicopters if they don't pay enough attention to their warning systems. The amazing 81x optoelectrical zoom with crisp thermal sights certainly helps players to search and destroy any possible targets. The Z-19E also has 57-1 or 90-1 rockets at its disposal, make sure to plan the assault and make every shot count with your CCIP.

However, the Z-19E also has some drawbacks: the overall protection is very limited, only the pilot seats are covered by Kevlar-boron carbide plates that are only rated for rifle calibre shots; any direct hits from autocannons or explosives will certainly tear the Z-19E into pieces with ease; it also lacks a gun turret for strafing enemies, although there are options to carry QJK99 gunpods, its calibre and damage is only good for light vehicles or SPAAGs.

Be sure to stay far enough from the battlefield for best survivability and stay low if possible; if there are any helicopters or aircraft menacing the team, bringing some TY-90 and striking them from their rear can make sure they do not have the reaction time to dodge incoming missiles.

The ancestry of the Z-19E traces back to the SA365 Dauphin and its licensed domestic version, HAMC Z-9 (NATO: Haitun 海豚, Chinese for Dauphin/Dolphin).

After the signing of the licensing contract and assembly in the 1980s, the SA365/Z-9 had quickly become one of the cornerstones of the rapidly developing PLAGF aviation branch as a multirole helicopter. After its fully localized production by the 1990s, it was also the placeholder as an attack helicopter before Project 941 (Z-10) was commissioned; the later variants Z-9W and WA were revised for more payload and newer AKD-9 ATGMs and TY-90 AAMs, as well as new avionics for ground support missions. In the early 2010s, AVIC developed a helicopter with some parts from the Haitun and revised its cockpit into a tandem configuration, as well as equipping the latest avionics to support the Z-10 in ground attack operations. The resulting product was known by the name WZ-19, then Z-19.

The export variant, Z-19E, was first shown as a mock-up in the 2016 Zhuhai Airshow and was tested in 2017, although a test-flight crash halted the program for a while and currently has no export order.

The first specialized anti-tank Chinese helicopter Z-9W was built on the basis of the Z-9, a licensed copy of the French Aerospatiale Dauphin multipurpose helicopter, which has been in service with the PLA since 1994. Further development of the attack helicopter led to the creation of a more advanced Z-9WA, and then a prototype, designated Z-19. Despite an accident during testing in 2010, Harbin Aircraft Industry Group received an order for the production of an experimental batch of attack helicopters. The rotor system and the tail section of the fuselage remained from the French progenitor. The Z-19 received a new tandem cockpit, countermeasures, radar and laser warning equipment. Z-19 received modern weapon systems, including ATGMs and air-to-air missiles. The design was considered successful and adopted by the People's Liberation Army. In 2017, a Z-19E prototype appeared, developed for export. This helicopter had more composite materials to decrease the take-off weight. The mock-up of the helicopter was shown at the air show in Zhuhai in 2016. At the moment there is no information about the production and shipments of the Z-19E to foreign operators.