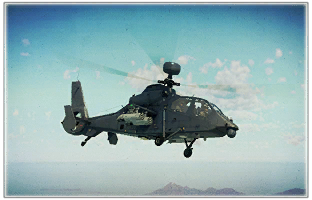 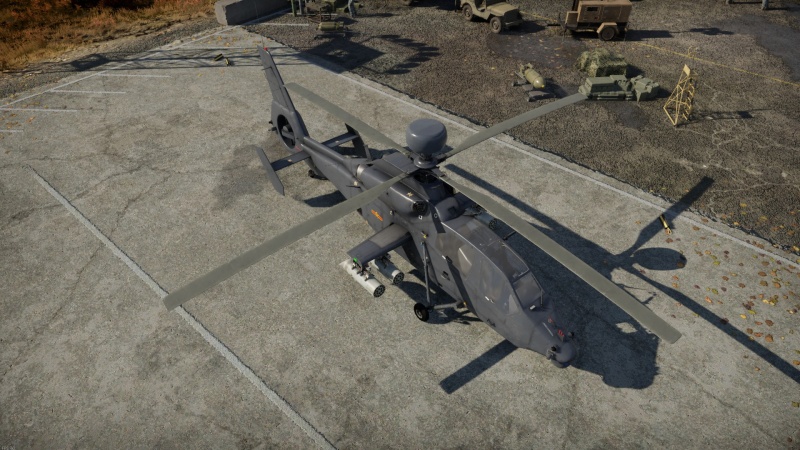 The Z-19 is a rank VI Chinese attack helicopter with a battle rating of 10.3 (AB/RB/SB). It was introduced in Update "Drone Age".

The Harbin Z-19 is a derivative of the Z-9WA that evolves the Dauphin design into a proper attack helicopter. Retaining the distinctive Dauphin tail and engine assemblies, the new fuselage drops the passenger cabin for a sleek tandem-seat arrangement with stub wings. The Z-19's firepower is a major step up from the Z-9 series: it now has AKD-9 laser-guided missiles comparable to the American Hellfire and twice the number of hardpoints. Avionics have been improved with a mast-mounted radar and an auto-tracker system. The "Black Whirlwind" continues the tradition of being a menace to air targets as well as tanks, but it also has the typical flaws of light protection and no internal gun.

The Z-19 keeps the classic agility of its Z-9 ancestors, being very responsive in pitch and roll movements. The slim fuselage increases the top speed and acceleration slightly. It can keep up with most of its peers and has an easier time dodging incoming fire. However it is still a lightweight helicopter with low mass and engine power, which means that heavy ordnance loads will significantly degrade its climb rate and acceleration.

The Z-19 unfortunately still lacks any appreciable armour. The seats of the pilot and gunner are armoured, but the lack of bulletproof glass means that even a heavy machine gun and a laser rangefinder is enough knock out a hovering Z-19. On the bright side, its slim profile, small size, and high agility make it more difficult to hit with unguided weapons.

The Z-19 has countermeasures, but in a smaller quantity than the previous Z-9WA. They should be used sparingly and in coordination with the MAWS.

The Z-19 can be outfitted with the following ordnance presets:

The Z-19's AKD-9 missile with semi-active laser homing (SALH) guidance finally replaces the venerable HJ-8 wire-guided missiles used by all previous Chinese helicopters. The AKD-9 is functionally a lighter version of the AGM-114B Hellfire, having the same top-attack, lock-after-launch, and salvo firing capabilities. However its 6 km range and 800 mm of tandem-warhead penetration are lower than the Hellfire and comparable to the Soviet 9M120 Ataka. The flight speed and TNT equivalent are below average, which means that enemies have more time to escape into cover and it may take a couple of hits to destroy armoured targets. It can also be used against aircraft in a pinch, although it is not particularly manoeuvrable and lacks a proximity fuse. Up to 8 can be carried on the outer two hardpoints.

The TY-90 air-to-air missile returns and can again be the bane of aircraft. Up to 8 can be carried on the inner two hardpoints, and in a welcome improvement from the Z-9s, they do not conflict with the carriage of ATGMs.

The Type 57-1 and FS70 rockets should be familiar to Chinese helicopter pilots by now and can be mounted on any of the four hardpoints. They are quite effective against soft targets like light tanks and SPAAs when aided by the Z-19's ballistic computer and the improved capacity means that the Z-19 can be a credible threat for rocket rushes.

The 12.7 mm machine gun pods should be disregarded, because even though the Z-19 still lacks an internal gun, the rockets and TY-90s have far more utility.

The Z-19 is a versatile helicopter. The high-zoom optics, thermal sight, and auto-tracker make it easy to acquire and use its AKD-9 ATGMs against ground targets. It is also effective in the anti-air role because of the infamous TY-90 AAMs, now aided by the mast-mounted radar. A full loadout of 8x AKD-9 and 8x TY-90 allows it to perform both roles at the same time, equivalent to two fully loaded Z-9WAs. However it has a number of flaws that require attention from the pilot.

The 340 m/s flight speed of the AKD-9 is much better than the HJ-8 but still inferior to most contemporary ATGMs like the Hellfire (475 m/s) and especially the Ataka (550 m/s). This means that it will take a while for the missiles to reach ground targets when fired at longer distances, giving them more time to retreat into cover. This is especially problematic when fighting enemy SAMs; even if the Z-19 fires first, they may be able to target and destroy the Z-19. If cover is available and there are no other distractions on the battlefield, it is possible to exploit the lock-after-launch capability to hide in cover for most of the flight duration.

The AKD-9's top-attack profile, limited TNT equivalent, and unexceptional penetration can also be an annoyance. It is not rare for a successful hit on a spacious MBT to only take out a couple of crew members and miss ammo racks or critical modules. An easy method of hedging bets is to use the salvo capability and fire two AKD-9s at well-protected targets, spaced by several seconds. If the second missile turns out to be unnecessary, there is time to divert it to another target. A more elegant solution is to manually adjust the laser designator aim point to either target ammo racks or turret roof armour, which is more consistent than the auto-tracker's default behavior of targeting the center.

The mast-mounted radar has 8 km range and 360 degree horizontal coverage, which helps detect nearby aircraft. But the vertical scan coverage is limited and a Z-19 hovering at low altitude will thus have a hard time detecting enemy jets cruising at high altitude. Visual detection should still be the primary tool for anti-air duties. The high-zoom gunner thermals and auto-tracker can help with identifying and tracking targets that have been discovered.

The Z-19 can be entertaining when used for fast, low-altitude rocket rushes because it can turn on a dime and finally has enough hardpoints to bring a decent number of rockets, but bear in mind that it has even less protection than the AH-1G Cobra and can be seriously threatened by American and Soviet tanks with heavy machine guns, to say nothing of IFVs with optical tracking or proper SPAA vehicles. The rockets are also ineffective against composite armour and trying to get a good angle for side or roof shots is risky. Keep a low profile, ambush distracted targets from unexpected angles, and retreat quickly to avoid retaliation.