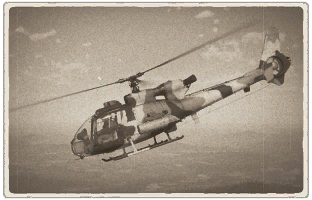 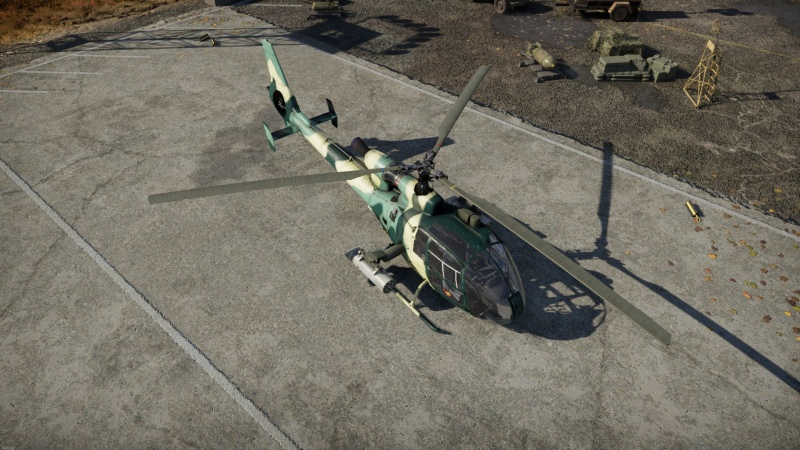 The SA.342L Gazelle(commonly known as 小羚羊 by the name Gazelle) is a rank V Chinese utility helicopter with a battle rating of 8.7 (AB/RB/SB). It was introduced in Update "Drone Age".

One of the earliest European purchases of Mainland China during the 1980s and their earliest "attack" helicopter that installed ATGMs, the name "gazelle" might not sound threatening, but it can still fight back with its limited payload including ATGMs and pair of rocket pods, as well as machine gun pods.

SA.342L is one of the Gazelle family of light helicopters from France with revised systems for carrying armaments, one of its most distinctive features over other helicopters of its era is the fenestron (covered tail rotor). Since its nature of a light helicopter, players will find the Gazelle agile while keeping sufficient top speed for scouting and assault mission. But do remember that its nature of a light helicopter - the only payload options are only 57 mm or 70 mm rocket pods, 12.7 mm gun pods and 2 pairs of HJ-8A ATGMs with low speed and relatively low range, so make use of its mobility to sneak into battlefield and delivery some blows onto enemy targets.

Like many utility helicopters, Gazelle does not have any kind of extra protection other than its airframe and windshields, any projectile that flies onto Gazelle will very likely damage parts of the helicopter and even being pilot-sniped with relative ease; the only better news is that Gazelle has self-sealing tanks to at least giving it the chance to save itself from being a fireball in the skies.

The SA.342L Gazelle can be outfitted with the following ordnance presets:

The weaponry choices of the Chinese Gazelle is rather limited compared to its French cousins. Due to the late introduction of ATGMs in PLAGF service and the small payload capability of the Gazelle, it could only carry 4 HJ-8A ATGMs at most which are the earliest "2nd generation" ATGM of the PLAGF with relatively worse performance; they are sufficient to knock-down tanks without composite armour or ERA packages, but do make sure to choose targets that are not aware of your presence since it takes around 13 seconds to hit targets at its maximum distance. Another downside to the Gazelle is that it doesn't have any form of fixed weapon for self-defense and it can only carry gunpods with other weaponries in custom loadouts at the cost of either side pylon. However, rotorcraft dogfights are rare at the tier, so in most cases, the default options are already sufficient for your use. Do remember that Gazelle has no ballistic computer and it takes some practice to utilize both rockets at maximum efficiency as their trajectory is not as easy to be handled as FFAR or Mighty Mouse.

Since its armaments have quite short range compared to other helicopters of the tier, be sure to utilize the excellent mobility of the Gazelle to enter the battlefield and leave in one piece - any vehicles with guns that can aim high enough to hit Gazelle are like predators of the Savanna, any hits could mean a quick and sometimes miserable end to Gazelle. Alternatively for a safer approach, take cover behind terrain or stay barely above tree level to conceal yourself from any "predators", only peek out and take out enemies that are in heat of battle and didn't expect your existence.

SA.340/341/342 Gazelle has been a very successful helicopter from France and already been export to multiple customers; while the new PLAGF Aviation Corps (陆军航空兵) established in October of 1986 with only Harbin Z-5 and earlier SA.311 at their disposal, they have already proposed for new helicopters to meet their urge demand for helicopters. The deal for SA.341L was set in late-1980s for 8 helicopters at $800k USD per unit where they were first seen as a part of the scouting operations of the 1989 Crackdown; while they were later served as a converted attack helicopter of PLAGF during military exercises, especially during the heat of 2nd Taiwan Strait Crisis as the only "dedicated" attack helicopter for PLAGF with 4 missiles onboard.

As newer Z-9 and later helicopters with better payload and performance came into service, the Gazelles are very likely been withdrawn from frontline service and serve as trainer for new pilots of PLAGF Aviation Corps.