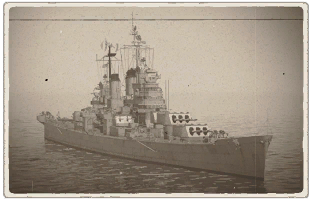 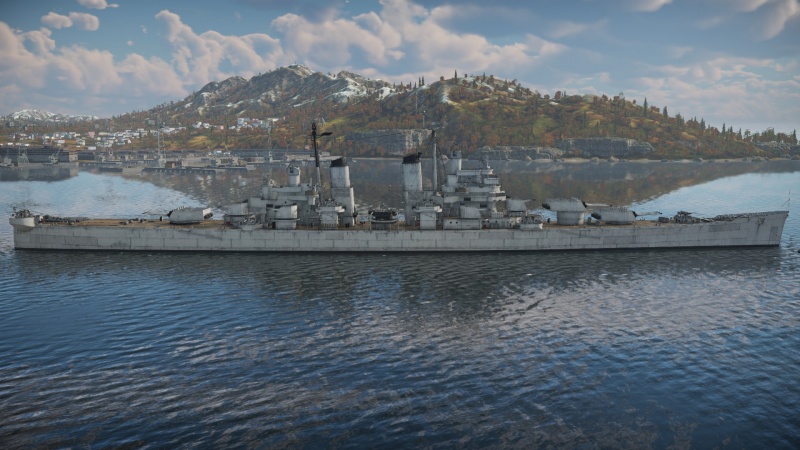 The Baltimore-class, USS Pittsburgh (CA-72), 1953 is a rank V American heavy cruiser with a battle rating of 6.0 (AB/RB/SB). It was introduced in Update "Direct Hit".

The Pittsburgh is the final heavy cruiser in the US tech tree, and it has all the power the justify its lofty position.

USS Pittsburgh, as a member of the Baltimore-class of heavy cruisers, was no longer subject to the terms of the Washington or London Naval Treaties, resulting in her having much thicker armour than her preceding classes. This is most evident in her main belt, which is up to a much more substantial 6 inches compared to earlier heavy cruisers with a less than 3-inch belt. This belt covers the midsection of the ship, protecting the machinery spaces from harm. These also form bulkheads fore and aft of the machinery spaces and protect the steering gear in the stern of the ship as well. Directly above and to the sides of the main belt, the armour drops to .75 inches of anti-fragmentation armour, and the rest of the hull has .5-inch plates of anti-fragmentation armour as covering all compartments. These swathes of anti-fragmentation armour will not stop any armour piercing shells, but will greatly reduce damage from HE shells, especially those of destroyers and light cruisers. The main armoured deck of 2.5 inches is positioned at the top of the 6-inch armour belt, and above the steering gear and magazines, protecting from any plunging fire that may enter at odd angles.

The turrets are well armoured like other American ships, with a 8-inch plate protecting the front of the turret, angled at 32° to increase effectiveness. This makes the turret effectively immune to most fire from destroyers and light cruisers, and at range against other heavy cruisers. Although it is incapable of stopping fire from enemy battlecruisers or battleships, it will still do well against other cruisers of the rank. This leads back into small 3.25-inch plates, angled sharply at approximately 73° before reaching the sides and rear of the turrets. These are protected by meagre 1.5-inch plates; these will protect against no more than 40 mm guns, and even destroyer shells will easily penetrate and knock the turret out of action. Captains should keep the turrets faced towards threats at all times, as the sides and rear of the turrets are very vulnerable areas. The turret barbettes are also protected against destroyer and light cruiser fire with 6.3 inches of armour, leading down to the magazines. These are positioned well below the waterline and are unlikely to be hit, but have 3 inches of armour surrounding them just in case.

Torpedo protection, as with other American cruisers, is provided only by fuel tanks. Captains should be wary of enemy torpedo spreads, as USS Pittsburgh is unlikely to be capable of taking hits from enemy torpedos without mortal damage to the ship.

Being a WW2 US cruiser, USS Pittsburgh shoots super-heavy AP shells out of her 203 mm guns. These shells are heavier than others, weighing over 150 kg. Most other nations' shells weigh usually 110 kg. This gives them a longer flight time, but a steeper angle. The idea was that, at long ranges, the shells would penetrate battleship's decks from above instead of hitting the much thicker side armour. In spite of this, they still have more than enough penetration below 8 km to cleave through the belt, magazine, and barbette armour of even the most well-protected cruiser at its BR and above, allowing the Pittsburgh to quickly disarm and dispatch enemy cruisers in but a few well-aimed salvos.

The secondary armament on the USS Pittsburgh are six dual-purpose, dual-mounted 127 mm turrets, weapons that a majority of other Bluewater ships use and so players are quite familiar in their operation at this stage. These turrets are the USS Pittsburgh's first line of defence against PT boats and aircraft.

USS Pittsburgh carries ten 3 inch Mk.33 automatic cannons in twin installation. As part of her AAA, the gun fires HE-VT shells in her default configuration and has no other ammo options. The gun has a rate of fire of 50 rpm and overheats in 35 seconds. Unlike the 40 mm Bofors, the 3-inch gun mount has no shield or surrounding parapet to defend against shrapnel; the side mounts can only rotate 180° so they can't shoot over the superstructure and cover another broadside, whereas the Bofors can rotate 360°. Overall, Pittsburgh's AA barrage is quite sparse, and she is completely exposed to air raid after all AA guns are overheated.

AI gunners that man them can target larger opponents such as destroyers and cruisers, although the effect that this has on the Pittsburgh's damage output is minimal.