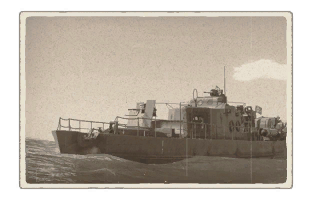 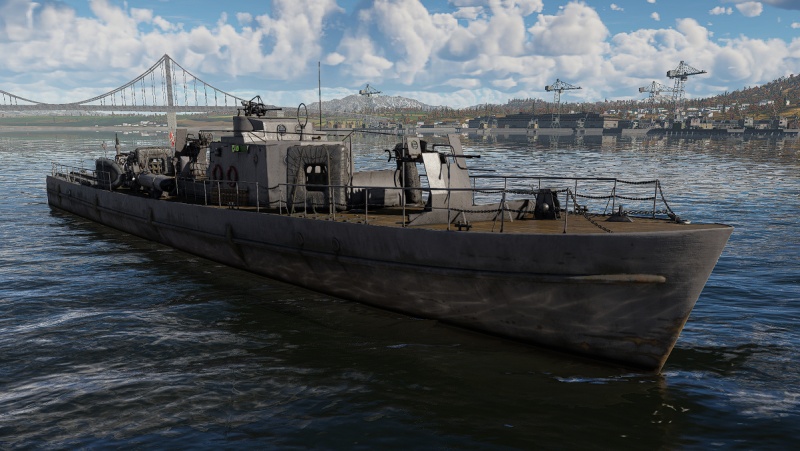 The R-301 is constructed using wood, the superstructure is hardened wood constructed to a thickness of 12 mm. The wooden construction of the R-301 means fire is one of the biggest threats to survival of the ship. There is no armour on the ship, apart from the gun shields and hardened superstructure. The R-301 has a crew complement of 42, increased by 1 compared to the R-boot R-130. The R-301 still provides a great attachment of sailors, which helps to increase the overall survivability of the R-301 dramatically compared to other ships in this tier.

However, the change from the Voith Schneider to the conventional blades has had a significant change on the manoeuvrability of this ship. It is incapable of performing the once fine manoeuvrable dance acts of the previous Voith Schneider propulsion system, which powered the R-boot R-41 & R-boot R-130.

The R-301's main armament consists of five 2 cm FlaK 38 automatic cannons. One dual mount in front of the bridge protected by a 8 mm hardened armour shield, one single mount directly behind bridge with no crew protection and one dual mount amidship between torpedo tubes, protected by the same shield as the other dual mounts. Due to the railing around the ship and the gunshields protecting the guns, they are unable to shoot directly in front of the ship up to about 400 m away. There are three ammunition types available:

The R-301 is also armed with a single 3.7 cm SK C/30 cannon located on the stern. Due to the very low rate of fire at only 30 rounds per minute, the gun is not very useful for surface combat.

The R-301 features two torpedo tubes, one on each side of the hull. These fire standard German 533 mm G7a torpedo which can be found on most Kriegsmarine vessels. With a speed of 81 km/h, a payload of 358.4 kg TNTe and range of 6 km while not upgraded with torpedo mode, these make them one of the best torpedo in its class, surpassed only by Japanese Type 93 Long Lance family. When upgraded with torpedo mode, the speed decrease to 56 km/h while maximum range change to 14 km. The The R-301 can also carry up to 10 EMC moored contact mines on the slides astern behind the 3.7 cm cannon. Each of these mines have a warhead of 384 kg TNTe, capable of sinking any vessel that will sail near them. However, using the mines comes at the cost of having them exposed on the deck and risking a fatal explosion to your vessel when hit.

The R-301 can be utilized as a second wave vessel, leaving the faster boats to get into battle first and supporting them from behind. Its torpedoes can be used for dealing with destroyers or armoured gunboats such as the Pr.1124 or Pr.191 series that most autocannons can not damage. The mines can be used to make minefield around capture point to deny any bluewater ship to reach and capture them for their team. Mines can be laid also into narrow passages of a strait. The R-301 can also be used to soak up enemy fire with its mostly empty bow compartment, while teammates deal with the ships attacking you.

R-301 was the lead ship of an R-Boot class, significantly larger than the preceding R-218. It had a length of 41 m and a displacement of 160 tons. This class consisted of R-301 through R-312, and the class was constructed from 1942 to 1945. The biggest change from the preceding classes of R-Boot was the addition of two 533 mm torpedo tubes, for use against enemy surface vessels. The R-301 class also added a third screw for increased speeds, up to 24 knots.