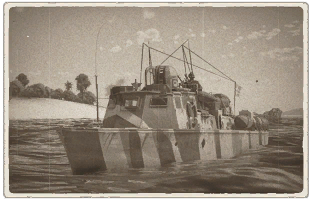 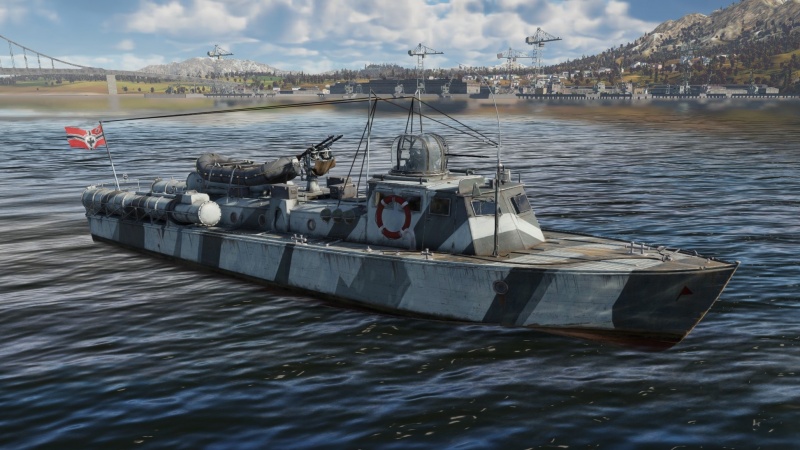 The KM-5 is a premium rank I German motor torpedo boat with a battle rating of 1.3 (AB/RB/SB). It was introduced in Update "Drone Age".

The 15 mm MG 151 is an excellent gun, with an impressive fire rate of 750 rounds per minute, allowing it to easily shred boats and aircraft at its BR.

It has two types of ammunition, an API shell that has great penetration and incendiary capabilities, which can penetrate the armoured turrets of some higher BR boats and even some frigates. The second is the HEI shell, which deals a massive amount of damage to enemy boats, destroying compartments and has a high chance of setting fires. It is also excellent against enemy aircraft, with a short burst capable of downing an enemy dive bomber. The gun is mounted on a turret that has excellent firing angles and traverse speed, which makes it easy for the KM-5 to lead and destroy enemy targets.

There are three ammunition belts available:

The secondary armament of the KM-5 consists of two MG34 machine guns on a twin mount located directly on the back of the 15mm MG 151 turret. There are 3,000 rounds of ammunition available for the turret, with 1,500 for each gun.

The MG34s are good against enemy aircraft and enemy boats found at the KM-5's BR. It has an excellent rate of fire of 900 rounds per minute, causing it to have a decent damage output despite it only being rifle calibre. However the MG34's small calibre will prove to be a weakness, as it makes it hard to do meaningful damage to larger boats, having no explosive filler. 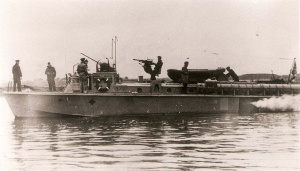 The KM-5 (Küsten-Minenleger-5) is one of the KM-class (KM1-KM36) built as a minelayer by Germany in World War II. KM-class boats were built to lay mines on enemy coastlines, but because of the unreliability of the engines, they were used in the lakes, rivers and coastal areas of the Eastern Front. As a result, 20 of the 36 ships in the KM series were stripped of mines and modified to be fitted with torpedo tubes. The KM-5 is one of them. The other 16 were used as minesweepers. Most of the KM-class boats remained until the end of the war and were requisitioned by the Soviet Union. The KM-5 was laid down in 1942 by Roland Shipyard located in Bremen, northern Germany, launched in 1942, and entered service on August 8, 1942, and was deployed to Lake Ladoga, Europe's largest lake, located in Estonia, and then to Lake Peipus, on the Estonian-Russian border. It was disposed of by self-scuttling. On July 3, 1944, she was raised near Kastre, Estonia, and was captured by the Soviet Union at Ventspils, Latvia in May 1945. 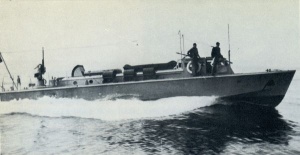 This KM-class boat has a machine gun on the stern.