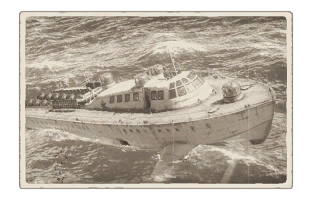 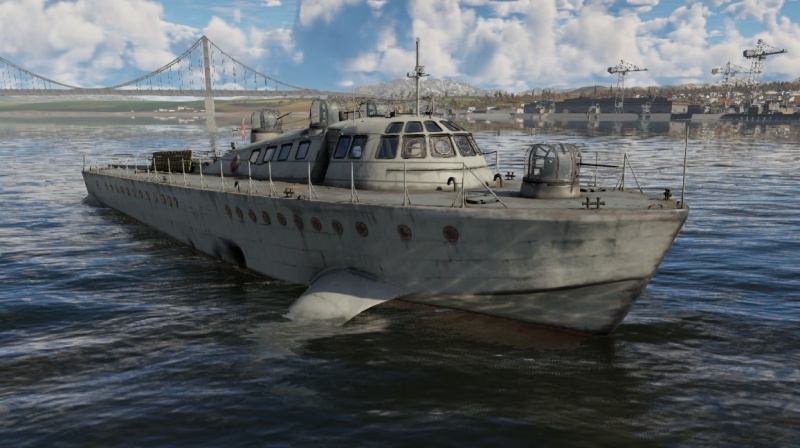 The VS-8 Schell I is a premium rank III German minelayer with a battle rating of 2.7 (AB/RB/SB). It was originally available during a short event testing out naval mines, but was unobtainable until it returned in Update "Red Skies".

The VS-8 has a steel hull which is 4 mm thick, with a wooden superstructure 10 mm thick. The only protection comes from its speed, firepower and having the ship spaced out. It features 22 sailors with the ship split into three sections. 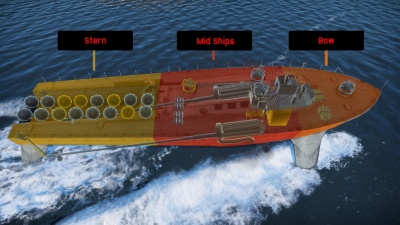 A major weakness is the location of the critical machinery which is only placed in the midship section. Due to the design of the VS-8, it could not be spread throughout the ship due to her size. The midship may look big compared to other ships but it is indeed very small. It does not have a lot of space. Any ship that has a cannon and uses a HE round, only focuses fire on the midships can cause the VS-8 to become disabled then knocked out with only a few blows.

Survivability increases when the mines are not carried on the stern: a single hit with a HE round or a round that penetrates and detonates one of the 16 mines will see the ship be annihilated.

The VS-8 is a large but fast ship, with top speeds up to 101 km/h in arcade and 76 km/h in realistic battles. It displaces 98 tons whereas the US. Patrol Torpedo boats displace 38 tons and the Soviet Project 187 class boats displace 157 tons. When turning sharp the VS-8 can wobble, when this happens allow it to do it. Compensating for the wobble will just increase it. The only issue with the wobble is that it prevents the ship from firing accurately on the target.

Its four 15 mm MG 151 make quick work of any enemy ships and aircraft, when the ship is broadside to the enemy vessel only three of her four turrets can be aimed on the target. When sailing towards the enemy ships at high speeds due to the hydrofoil design, only the front turret will be able to be used the other the other two turrets placed mid ships are unable to depress low enough. The hydrofoil causes the front of the ship to raise above the water, like a kite flying in the sky.

Even when the ship is at a full stop and has settled on the ocean waves, only two of her turrets can be used when firing flat on the horizon, this is due to the location of the ship’s captain. The two cannons are placed midship, they cannot fire forward together since their crosshairs would shoot the captain. The two midship turrets are placed behind the captain, with the captain standing on the bridge just in front of them. Thus, the captain is blocking the gun sights. If the ship is a large ship such like a destroyer or a minesweeper the three cannons can cause mayhem on the unsuspecting ship. However, the cannons alone won’t normally be enough to sink a destroyer. Her four turrets can only be used together when an aircraft flies over. Due to the design of the VS-8, her four turrets cannot be used together to engage a surface target.

The VS-8 offers a reload of up to 10 seconds, they are equipped with three different belts, these belts are:

This ship carries 16 EMC moored contact mines, each one weighing 1,100 kg, with a total weight of 17,600 kg. Each mine contains 300 kg of explosive. The explosive mass is equal to 384 kg TNT, giving the minelayer a total delivery of 6,144 Kg TNT. These mines only explode when something hits them, such as a boat, cannon, or machine gun fire. The mines are visible when they are dropped, they can be seen bobbing around in the water like a buoy, they can be destroyed by enemy fire or by contact with an enemy vessel.

The mines are dropped individually, they can not all be dropped in one go. When one mine has been dropped another moves down the ramp to replace it. Only after it has reached the end of the ramp can the next mine be dropped.

The VS-8 has two main playstyles: with mines and without them. Each playstyle provides an unique experience for this lightning fast ship.

Using the VS-8 as a minelayer can cause the enemy team to play defensively and cautiously. To do this, when spawned into the match head full speed to either capture point and cover the zone with mines. The biggest issue with the VS-8 is, when she carries her mines, a single shot from a destroyer cannon on one of the mines on the ramp will cause it to explode and sink the minelayer.

If getting close to the capture points feels too risky, head towards the enemy spawn zones, and in between their spawn and the capture points lay the mines. The enemy ships will be focused on rushing to the capture points, they will not be paying much attention to the water and thus will run into the mines then only realise when it's too late that they have entered a minefield. In case the enemy ships do notice, start to turn, but are very close to the mine, you can fire at the mine, the VS-8 MG 151’s will cause the mine to explode and thus destroy the ships.

If engaging an enemy destroyer which has not noticed the VS-8, come along side the side the guns are not facing then overtake it and drop a single mine or two in its path. As soon as her bow runs over the mine, boom she goes. Another option is to lay some mines beside the enemy ship and then withdraw but shoot the mines as the VS-8 is withdrawing and watch her explode. Once the mines have all been used, the VS-8 can be used as a lightning fast gun ship to reap havoc onto the enemy team.

Without mines installed, the VS-8 becomes an gunship, its lighting fast speed, its four MG 151 cannons, and its good manoeuvrability at high speed allow for it to sneak up to the capture points and take them before the enemy. It also allows for the ship to set up ambushes by heading full speed into places that conceal the ship i.e. caves, buildings, behind walls or rocks. One of the competitive advantages of the VS-8 is its size, since the ship is long most enemy players will shoot its aft section. When the mines have not been equipped, most of the bullets will pass though the ship since this section is empty and contains no critical elements. The only rounds that will cause a major issue are HE rounds since they explode on or just after contact with a surface. Even a few shots could penetrate the rear ammunition storage room, which is located in the mid-section and set it off. The VS-8 is a great costal ship hunter in this configuration, the lack of mines allows for it to get close without the fear of denotating without warning in combat.

How to defeat another VS-8 in combat

The major weakness of the VS-8 is its midship section that contains all the vital elements: bridge, crew, radio, engine and ammunition rooms. A few well placed shots here will knock out the ship with even a single HE round from a large- or medium-size calibre cannon will destroy the ship. The VS-8 has its ammunition rooms split into two: one at the back of the midship and one located just in the front in the bow section. A single powerful HE round, or a focused salvo of API or a time-fused HE round entering the ammunition rooms will cause the ship to explode. The majority of the crew is located in the midship section, along with all the midship turrets, aft turret, ammunition storage for all turrets, fuel tanks, both engines, water pumps, radio station and the bridge. Spraying machine gun bullets or autocannon rounds in this one section will knock out the ship. If the VS-8 has her mines installed, load a HE round and fire at the aft section of the ship. If the ship doesn’t have a large or medium cannon with a HE round, focus fire on the midship and before the VS-8 can react the ship will be knocked out of action.

Quickie - Mines and the VS-8" - Oxy
VS-8 - TheEuropeanCanadian