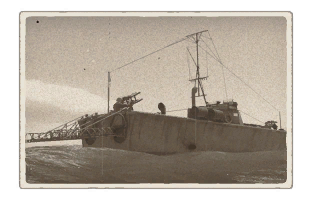 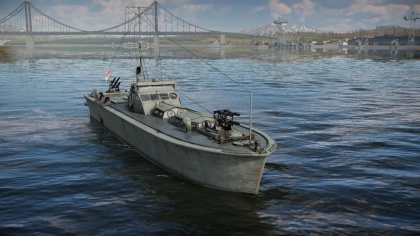 The MTB-1 1 series is a reserve Rank I British motor torpedo boat with a battle rating of 1.0 (AB/RB/SB). It was introduced in Update 1.83 "Masters of the Sea" as part of the British fleet closed beta test. 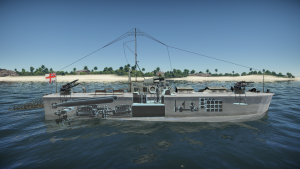 Profile shot of the MTB-1. The engines are located in the aft with ammunition storage at the bow.

The MTB-1 has no armour at all, so the motor torpedo boat (MTB) can't take too may hits. MTB-1 has 11 crew members, which is quite numerous compared to the German and Soviet MTB's. In terms of survivability, it is best to keep moving due to the absence of armour on the boat.

Maximum forward speed has a potential to reach 86 km/h in ~10 seconds with reverse speeds reaching 43 km/h.

The MTB-1 has decent armament for a MTB. There are two turrets, one at the front and one at the stern, both turrets have four 7.72 mm Lewis machine guns. Due to the high firing rate, you can destroy any MBT and most larger ships like the Soviet OD-200 and the German R-boat. It is quite easy to run out of ammo, and the Lewis machine guns are also slow to reload taking about 16.7 seconds leaving it vulnerable to attack. Available ammunition belts to research are the armour piercing (AP) and armour piercing incendiary (API).

The MBT-1 has two forward pointing 18-inch Mk.XII Torpedoes with a range of 3.2 km at a speed of 69 km/h. With the Torpedo Mode module installed the range is reduced to 1.37 km with speeds reaching 74 km/h. As both torpedoes are forward facing, side-by-side they are accurate and easy to aim. 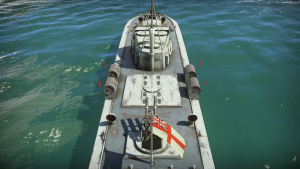 Overhead shot with depth charges numbered from 1 to 4 showing which order they are dropped in.

The MBT-1 can be equipped with four Mk.VII depth charges with an explosive mass of 130kg each.

As with any MTB, it is best to keep moving due to the boat having no armour. A few hits from an enemy MTB or ship will easily destroy you. When facing ships such as the Soviet OD-200, it's best not to get to close since they have a powerful cannon. Despite having eight Lewis machine guns, destroying enemy vessels can be difficult due to the lower calibre compared to other MTBs like the Browning .50 Cal or the DShK 12.7mm guns. This results in a shorter range and less damage output especially at longer ranges which is further exacerbated by long reload times.

As such, the MTB-1 is fares best in a support role, backing up bigger, allied ships. It can rely on them to distract the enemy whilst the MTB-1 can move in a little closer to deploy its torpedoes whilst compensating the Lewis machine gun's lower calibre and range (preferably within 1 kilometre) with its high rate of fire with both of the turrets placed in the stern and aft of the ship allowing to engage both turrets reliably. Because of its turret placement the MTB-1 can also be used as a close anti-air support as the lower calibre is still rather effective on planes, especially with its HEI rounds.

The MTB-1 1 series is a British Power Boat Company 60 ft Motor Torpedo Boat (MTB). The 60 ft MTB was a designed by British Power Boats in 1935. It was developed from the 64 ft Ocean Rescue Launch which which the company was making for the RAF at the time, the rescue boat was shortened to 60 ft in length and a series of changes were made to make the design better suited for use as a torpedo boat.

The Navy placed an order for 18 60 ft MTB in 1936, and in 1936 the first flotilla of six boats left the British Power Boat Company factory at Hythe (southeast coast of Britain) under thier own power to serve with the Royal Navy in Malta. The 60 ft MTBs in Royal Navy service were designated MTB 01 to MTB 12 and MTB 14 to MTB 19.