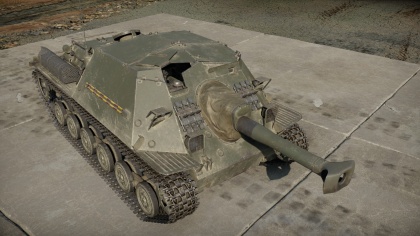 The armour of the Ikv 103 is between 18.5mm to 5mm of thickness. This armour shouldn’t be considered as survivable since every round you face will most likely penetrate and destroy most of what’s left inside the tank. The thin side-armour has the occasional ability to result in overpenetration, but any frontal attack usually has enough force to activate most shell fuses. The tank is also incredibly weak against chemical rounds and aerial attacks due to the hull break featured on the vehicle. It is heavily recommended to avoid any form of damage since even artillery fire has the possibility of guaranteed destruction. Due to this low survivability, taking the maximum amount of ammunition isn’t something to frown upon. Thanks to the short length of the round, as well as compact storage, ammunition explosions are quite rare.

The Ikv 103 sports a good engine with a fairly high RPM giving it a lot of torque for climbing a lot of obstacles and average terrain. Although the top speed never exceeds 50, the Ikv 103 cruises comfortably around 40-45 kph on a straight line and 25-35 kph on an uneven terrain, depending on the driving level and modules unlocked, no matter the surface below it. The vehicle finds no issue traversing snowy and sandy terrain thanks to the low weight and good track surface, but struggles in deep waters due to the low chassis it sports. The reverse rate of the Ikv 103 is also quite good at 11 kph. Even if this speed can’t hold a candle to the regular speed the 103 has, the reverse rate is still enough to safely peek over hills and reverse back into cover before getting fired upon.

The Ikv 103 is outfitted with a 105mm cannon firing heavy shells with a reload of 10 or 13 seconds depending on crew qualifications. This cannon is unusually short for its caliber, firing heavy shells with low-velocity. Although the early Psgr m/49 lacks significant penetration and post-penetration damage, the later Slpsgr m/65 HEAT-FS round packs up to 400mm of penetration, easily penetrating anything it sees with devastating results. This later shell features a higher velocity than the previous round, as well as more explosive filler making the post-penetration much deadlier than before. The gun is aimed manually without the help of electrical equipment, results in a slow traverse rate. At maximum, the gun traverses at 8° per second, resulting in many deaths at closer ranges. This makes the gun most effective at medium ranges, where the traverse is ideal, and the shell velocity isn’t crucial. It should be noted that the incredible gun depression allows the Ikv 103 to fire from extreme angles allowing it to safely engage targets without the risk of overexposing the tank, something which becomes incredibly useful to increase the vehicles survivability.

The Ikv 103 is a nimble vehicle with a small silhouette compared to its peers. The lightweight and powerful gun set it apart from other vehicles at the battle rating. The general playstyle can be compared to the Jpz 4-5 found in the German tech tree. This playstyle is a more aggressive spin on tank destroying than usual, where the vehicle has to make use of positioning rather than frontal survivability. The Ikv 103 can’t use common sniping locations very effectively since any form of enemy retaliation will destroy the vehicle completely. Instead, the 103 needs to drive full speed to various locations where enemies are unlikely to expect danger. Although this playstyle requires a lot of map knowledge, the reward is quite high for a successful flank, thanks to the devastating cannon the Ikv 103 carries. Thanks to the light vehicle weight and strong engine, the Ikv 103 is also able to climb a lot of obstacles, something that helps a lot when fighting on bad terrain. However, maps that lack terrain entirely cripple the 103’s performance quite significantly, since the tank cannot hide, resulting in a lot of face-to-face engagements, which the Ikv 103 almost always lose.

In 1952, a cannon-equipped version, under the designation the Ikv 72 (short for “infanterikanonvagn”, meaning “cannon-equipped infantry-support vehicle” in Swedish), was put into service. A little later, the SPG’s were re-equipped with 105 mm howitzers and the cabin was retrofitted with a roof, which could protect the crew from bullets and shrapnel. This modification received the designation Ikv 102. Meanwhile, the Swedish army ordered another series of the vehicle with an upgraded chassis to allow installation of a new air-cooled engine, while the gun and the armour remained the same as the Ikv 102’s. This new version was designated Ikv 103. The Ikv 102 and 103 SPGs remained in use by the Swedish army until the mid-1970s, when they were replaced with the Ikv 91 SPG.