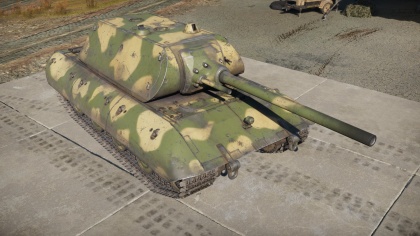 The E-100 is a gift Rank V German heavy tank with a battle rating of 8.0 (AB) and 7.7 (RB/SB). The tank was introduced in Update 1.53 "Firestorm" and has the distinction of being the second Rank V gift vehicle in-game, with the first being the La-174.

The E-100 could only be obtained in the special tournament events, making its acquirement rare to the point of being one of the rarest tank in the game. It was first available in the "Teutonic Giants" tournament held from a time span of January to March 2016. It was made available again in War Thunder's 5th Anniversary tournaments, then again in the War Thunder's 6th Birthday tournaments.

The side armour on the E-100 is also slightly more effective than the Maus. On the Maus, the huge flat side skirts make up part of the side hull armour. On the E-100, the side skirts are completely separated from the main hull and are 75 mm thick sloping, which adds up with the 120 mm flat side hull plate. This feature makes the E-100 able to defeat lesser rounds from low caliber guns. Howerer larger rounds will still be able to penetrate the side skirts with ease, even chemical shells. The skirts can be destroyed after taking enough damage which reveals the very weak side armour of the tank. It should also be noted that shooting between the tracks is a very valid method to take out the E-100 as the armour is extremely weak there.

Compared to the Maus, the E-100 truly shines here better than anything else in differences. The E-100 weighs 38 tons less than the Maus and the effect in speed is noticeable, able to go nearly twice as fast as the Maus and is more maneuverable. The tank only reaches his top speed on a downslope, its cruise speed being 24 km/h in a straight line. The reverse speed being half the Maus' makes it average compared to other heavies of that rank. Despite that, the improved mobility gives the E-100 the ability to redeploy on the battlefield and react faster to potential threats.

The E-100 is played similar to the Maus, with the same armaments and similar armour rating. However, the E-100 has the benefit of increased mobility due to its improved chassis. The E-100 can thus be somewhat more suitable in moving from cover from cover, but close quarter combat is still not recommended due to its still relatively slow movement, long reloads, and the lethal anti-tank armaments the other Rank V vehicles are bound to have, including the now prominent Anti-tank guided missiles. In a downtier the E-100 can be played much more aggressively and has to put pressure on the enemy team in order to be impactful. The psychological factor makes it easier to achieve this goal as this tank is a very feared foe and can in fact turn the tide of the game. However downtiers should be taken seriously as your enemies will be focused on taking you out. Picking the right targets is also something that an E-100 driver has to master to get good games. When facing a light and an armoured target the main gun should always be used to destroy the strongest tank while the 75 mm gun takes care of the squishy one. Even when facing weaker opponents the turret has to be angled between each shot in order to avoid shot traps. When the E-100 gets an uptier you should get to cover as quickly as you can and play it extremely carefully as any shell may be enough to take you out or at least cripple you. The 128 mm is not as effective as you now have to aim for weakspots on tanks like the T-55AM-1 and the 75 mm should become a smoke dispenser.