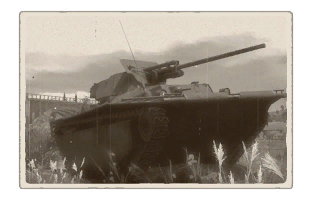 Pz.II/Flakpanzer 38: these German 20 mm cannons are a huge threat to the LVT since they can easily tear through the thin armour even at longer distances. Their high firerate also means that they can quickly knock out the LVT's crew or disable multiple critical components like the huge transmission and engine. But these vehicles are fairly easy to one-shot with your powerful 57 mm cannon.