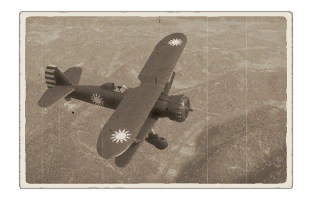 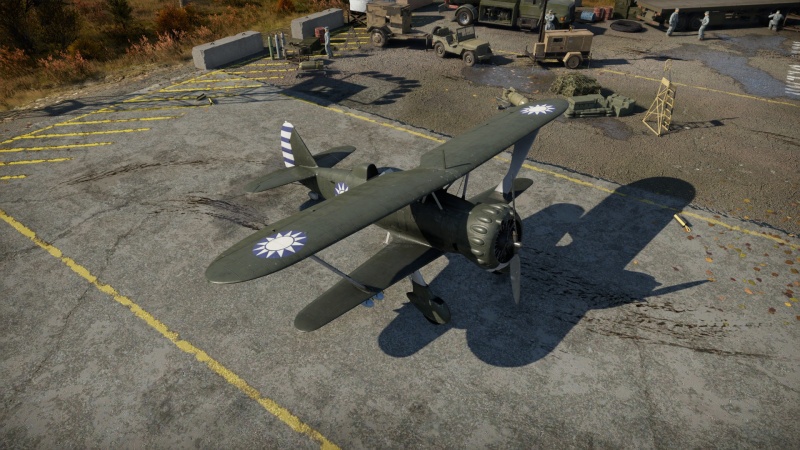 The ␗Hs 123 A-1 is a rank I Chinese bomber with a battle rating of 1.0 (AB/RB) and 1.3 (SB). It was introduced in Update 1.91 "Night Vision". It is the same as the German version, but in Chinese markings, and very slight changes in performance.

The Hs 123 behaves very similarly to other Interwar-period designed fighter biplanes, relatively slow but highly manoeuvrable aircraft, this in particular being somewhat slower and with a lower climb rate because of its payload.

As with most Interwar-period designed biplanes, the Hs 123 A-1 has no armour and offers no protection to its pilot nor its critical components (engine, not self-sealing fuel tanks, oil-cooling systems), so the survivability depends on the pilot's skills. Being a metallic-frame, cloth-covered construction and not having self-sealing fuel tanks, regular Ball and AP rounds won't damage it a lot (unless they directly hit the pilot), but it's specially susceptible to Incendiary and Tracer rounds, which can ignite it if they hit the fuel tanks or the cloth cover itself.

The Hs 123 A-1 (China) can be outfitted with the following ordnance:

Being a dive-bomber, its main role is rather self-explanatory. However, its frontal armament makes it feasible to be used in a fighter role, especially after dropping its bombs, which leaves a lighter and in consequence faster and more manoeuvrable plane.

In AB, the Hs 123 is a ground attacker/emergency fighter. Use your bomb load and guns to dispatch as many ground targets as possible, while making sure to keep the enemy off of your six. If someone does get on your six, pull a snap turn and keep him from getting a good shot on you for as long as possible. If you can't get onto his six you'll have to hope help arrives soon.

In air RB, the tactics change massively. Use your bomber spawn to stay above the enemy team, and dive only after the enemy fighters have passed below you. Hit their tanks and other targets with your bombs through either dive bombing or low level bombing (set a 2 second fuse then fly as low as you can, dropping just before you lose sight of the target). After your bomb load is exhausted, engage soft targets for a while. If there are none it's time that you kill some of the enemy team, begin to climb and look for damaged fighters/attackers returning to their airfield, then pounce on them. Your 7.92 mm machine guns are good, but be sure to aim for wings, as most aircraft you'll face will likely be able to absorb most of the MG bullets you put into their fuselage.

In tank RB, the Hs 123 has huge potentials but often depends on the pilot's bomb-dropping skills and the enemy vehicles. Your bombload is fantastic for a plane at this BR, making you a great ground attacker in tank RB. The 4 x 50 kg bombs drop first in groups of 2, so use them for light vehicles or SPAAs. If the target tank has no armour (e.g. GAZ-AA, FlakPz I, etc), only drop one group of 50 kg bombs, whereas if they are light / armoured tanks, drop the two groups together. Then the single 250 kg can destroy anything and will be much easier to aim thanks to its larger fragment range. Note that you need to lead more for both 50 kg & 250 kg bombs, as the Hs 123 is quite slow, resulting in a lower momentum for the bombs comparing to later planes. Also, if tracer shells start to come near you as you dive, immediately pull off or dodge. The Hs 123 is very fragile, with its wing easily ripped off by a few bullets and the pilot easily sniped. The large radial engine is also prone to taking damage. After all the bombs are gone, you can start looking for incoming enemy planes. You have a good chance of out turning most planes with your combat / takeoff flaps down, so lure them into turn fights when possible.

In simulator, the Hs 123 is quite a decent multi-role plane to fly. It has great visibility towards the lower sides meaning it is easy to search for ground targets, its over-the-nose visibility is also decent. The upper front view is obstructed by the upper wing, and the rear view is blocked by the razorback design, as a result you cannot see what is on your tail. Its control handling is great at all speeds, making it a rather stable platform for ground pounding and an easy plane to take off and land in. It can perform base bombing, ground pounding and dogfighting. Bring the least fuel if you know that your targets are not far away, otherwise bring at least 30 minutes of fuel for prolonged patrolling and fighting. Note that you want to use 85-90% throttle as the oil easily overheats with either WEP or 100% throttle, so save the WEP for emergency manoeuvres.

For base bombing, it is recommended to fly at treetop level to get to the base as soon as possible since the Hs 123 is quite slow. When approaching the base, make sure that you are flying to its side so it can be seen from your side window and not get blocked by the nose. Once you see it, dive at it at a shallow angle. When the gunsight slices past the furthest edge of the base, release all the bombs, bank towards a nearby airfield and head back.

For ground pounding with bombs, look for tanks and pillboxes. First you need some separation between you and the target so you have enough time to smooth the aim. Dive at the target at a rather shallow angle, and release the 50 kg bombs when you are very close with gunsight above the target. Release the 250 kg when the gunsight is well above the target. Note: don't forget to set a fuse for at least 2 seconds since you are dropping bombs very low. If you only use the MGs, your targets are trucks, AAA and howitzers. Dive at it and stabilise the plane so the gunsight stays overall still at the target. Then, once the target fills out around 1/6 of the gunsight, open fire. If your aim is accurate you can destroy one target in a single pass. However, each MG only has 500 rounds and their rate of fire is pretty fast, so control the trigger to save some ammo for any unexpected dogfights.

For dogfighting, it is better to engage with an altitude advantage. Track the opponent using lead or pure pursuit, as with lag pursuit you will end up at the 6 of the target aircraft whose fuselage will soak up most of your bullets. With a reflector sight and decent visibility over the nose, the aim should be easy. Target their wings or the nose and avoid the back half of the fuselage as there is usually nothing in there. You can turn with most planes, even with the infamous I-15, with your combat / takeoff flaps deployed. However, if you see a plane with an I-15's short and fat fuselage, a flat radial engine and triangular stabilisers located right after the low-mounted mono wings, consider disengaging. The I-16 is faster than you, turns equally well and can cripple your fragile Hs 123 even with 2 x MGs. If an I-16 is on your tail, a tactic to counter it is to utilise your stableness. Deflect both your ailerons and elevators for around 70% to get into a barrel roll. If the I-16 is to follow and cut inside your roll, it is super likely to enter a flatspin due to its unstableness in manoeuvres. Perform the barrel roll tighter and tighter until the I-16 loses control and spins, then turn around and shoot. Or, simple do flat turns but turn tightly, a tight-turning I-16 is also prone to enter flatspins, however this is at risk of getting shot before it loses control.

Landing is easy thanks to the low stall speed and lovely handling. Line up and approach the airstrip at treetop, decrease speed to at most 210 km/h and deploy combat, takeoff and landing flaps in order. The touchdown speed should be no more than 140 km/h to avoid bouncing up. Release brakes immediately as soon as the nose starts dipping down to avoid propeller strike.

The Chinese Nationalist Air Force received twelve of these planes from Germany, which were used against Imperial Japanese Navy warships in the Yangtze River during the Second Sino-Japanese War.