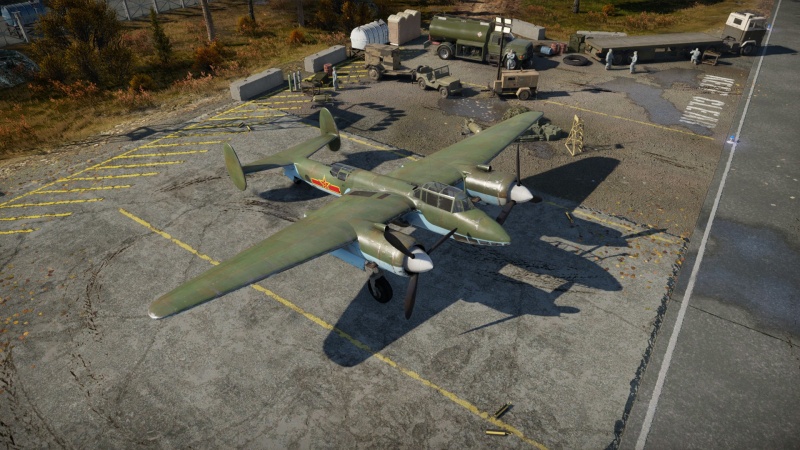 The Tu-2's powerful offensive armament of two 20 mm ShVAK cannons sets it apart from other bombers , most of which lack any offensive armament at all. Although not having amazing penetration the cannons are still useful against AI ground target in air battles, and some of the more lightly armoured vehicles in ground battles. The cannons also allow you to use your air spawn to engage enemy bombers, and can even be used again enemy fighters at opportune moments. The cannons mounting at the base of the wings means that convergence is not too bad of a problem, and the amount of ammo is fairly decent as well.

The Tu-2S-44 (China) can be outfitted with the following ordnance:

The ␗Tu-2S-44 has the same bombload options as its counterpart in the Soviet tech tree, the Tu-2S-44. At 2,000 kg the maximum bomb load is fairly good for a light bomber, but nothing special compared to most bombers around this BR. If you are trying to kill ground targets then the 4 x 500 kg bombs loadout gives the best balance of lethality and number of bombs. Bombs can be dropped individually, making the load very effective.

The defensive armament of the Tu-2S-44 is among the worst it this battle rating, consisting only of three 12.7 mm machine guns. In addition the front dorsal turret and ventral turret have fairly narrow firing arcs; and none of the guns have a particularly impressive ammo pool. They can be useful in some situations, but you should generally not rely on the defensive guns for your survival.

These are constant opponents at the battle rating, so they should never be ignored. If possible, run back to base and don't commit to a head-on with props, as they have a little more time to aim their shots and steady their plane. Rely mostly on the defensive turrets if needed.

These are the bane of bombers (especially medium-sized ones such as the Tu-2S-44). When the tracers fly, don't risk a dive. Circle around or find some unsuspecting flanker that is outside the cover of these AAA guns.

Main article: History of the Tu-2S-44

The Tupolev Tu-2 has already proved its capability against German forces and contributed a lot for the Eastern Front; while the WWII has ended, Tu-2 waited for another chance to shine, this time on the hands of PLAAF who were in need for a frontline bomber to handle Nationalist forces on coastal islands.

The PLAAF got their hands on 29 Tu-2 in 1950, they were first seen during the battle of Taehwa-do Island (大和島/대화도) off-coast of northeastern Yellow Sea; this island, with just around 5 km² in size was in fact a forward intelligence base for the United Nation forces with radars and 1,200 personnels on it. It was planned that PVAF would assault the island, supporting the landing forces in November; earlier in the month, Tu-2s bombed the island with 95% accuracy over the targets; but on the 30th November, due to the lack of escorting jet fighters, these 9 Tu-2 were only accompanied by 16 La-11 and they have to face 30 F-86 Sabres from USAF, this caused the distraction of bombers and 4 Tu-2 were loss during the battle.

While they saw some losses during the Korean War, in January 1955, Tu-2 along with IL-10, were saw during the very first tri-service landing operation of PLA- the battle of Yijiangshan Island (一江山岛) off the coast of Zhejiang, forcing the Nationalist forces to retreat from Dachen Island (大陈岛) and marking the total loss of Zhejiang, leaving only Matsu and Kinmen of Fujian the remaining Nationalist-controlled area off-coast of Mainland China. Tu-2 were then saw in riot-suppression operations at southwestern China on the Tibetan Plateau, soon PLAAF realized that Tu-2 was not enough to handle the CIA-supplied rebels with M2HBs via air-drop and eventually have to deploy Tu-4 as a gunship, replacing Tu-2 for supporting the PLAGF with those 10 x 23 mm autocannons on-board.[1]

These Tu-2 were eventually decommissioned in 1982 and marked the end of propeller-driven frontline bombers in PLAAF service.