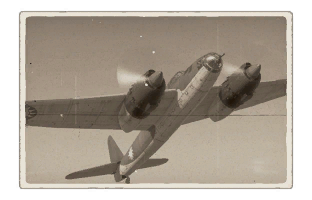 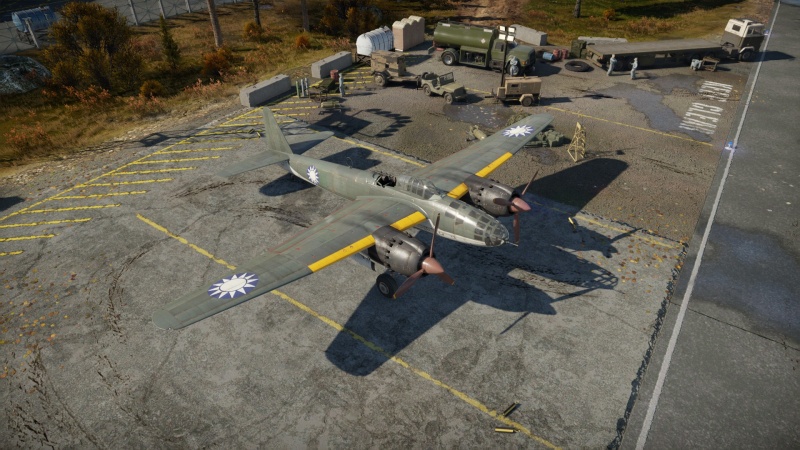 The P1Y1 was nicknamed "Frances" by the Allied pilots, and "Ginga" (Galaxy) by Japanese pilots. The Ginga is known for being one of the fastest bombers and is played similarly to the German Ju 288 and Arado 234. The overall tactic - dive, drop payload, retreat, repeat. The P1Y1 can go a little over 675 km/h (400 mph) in a dive, which is very fast for the battle rating.

The P1Y1 is a rather fragile aircraft, specifically to its detriment it has poor defensive guns and sadly has no turret coverage for the underside of the aircraft. This typically results in a situation where the P1Y1 is easy prey to enemy fighters attacking from underneath without fear of reprisal.

The P1Y1 becomes extremely vulnerable after the loss of both speed and altitude. Since the P1Y1 can outrun all Japanese fighters that you will face (except the J5N1, Ki-108, and J2M), you can speed away to fighter cover or the home airfield if caught in a sticky situation. For the planes you can't outrun, there are one of two strategies. If the plane chasing you is heavier than the P1Y1, you can generally outmanoeuvre it, which will make them lose energy and retreat. Another strategy is making them follow behind your rear gunner, so long as your gunner is firing, the enemy aircraft will need to manoeuvre to avoid being hit, effectively messing up.

The P1Y1 is a highly agile and fast aircraft. It can make sharp turns and can pull out of a dive quickly with the use of airbrakes. The airbrakes on this plane are extremely effective, but they take five seconds to deploy, so keep that in mind. The P1Y1 can also turn extremely well, although its roll rate is rather poor. The plane has good elevator authority, meaning it will be able to pull up very quickly. This is good for ground battles or naval battles. The performance of the P1Y1 is excellent. There is only one small flaw, and that is the P1Y1 locks up at redline speeds, so make sure to use those airbrakes!

The stock payload for the Ginga is poor, so rush all payload modules. The torpedo will be useful on Pacific maps to target destroyers. However, if cargo ships or pillboxes are present, the 500 kg bombs are your best bet.

The P1Y1 mod. 11 (China) can be outfitted with the following ordnance:

The 20 mm cannons on the Ginga are early Type 99 cannons, so they do not have good explosive filler. What's more is that the cannons are inaccurate, and have a low rate of fire. Do not expect to go kill anything with them. What you can do is use these cannons as a deterrent. You can outrun a P-51 using a special method that is known to Ginga pilots as "scrambling." Since the P1Y1 has a good top speed, you can show your rear of the aircraft to the approaching fighter. If they are catching up, dive. If you hit the deck and are cruising at ground level, you can force the enemy fighter to tail behind your 20 mm. This gives you a great shot at them, and it will most likely deter them.

In Arcade battles, the light payload is somewhat countered by the ability to reload. It is recommended to use the plane to hit high-value targets such as pillboxes since it is limited to two bombs (though it is one of the few Japanese medium bombers able to carry 2 x 500 kg). Other planes with larger numbers of 60 kg bombs are better suited for taking out tanks and soft targets. It is at a huge disadvantage when compared to planes such as the B7A2, which has forward cannons able to strafe soft ground targets while bombs reload. As such, most pilots would use the B7A2 over the P1Y1, though this plane may still be useful in one's lineup for use after the B7A2 has been lost. 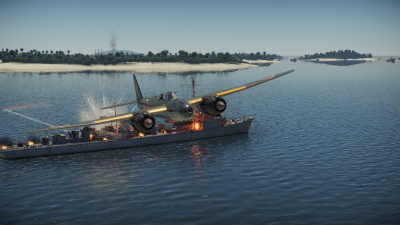 In Realistic tank battles, the best option is likely to take the 2 x 500 kg bomb option and again use its speed to quickly get in, hit 2 targets and run away before enemy fighters realize it is there and intercepts. Again, its speed should allow multiple runs somewhat making up for the light payload. In Realistic battles, the main question is how to utilise this rather delicate aircraft effectively. The general tactic which provides the most effective outcome is to use this aircraft as a ground pounder. The most effective targets for this aircraft will be pillboxes, vehicles and anti-aircraft artillery. Leave the dogfighting, bomber hunting and base bombing for the arcade battles. This is for a number of reasons, the first being the Ginga's payload which consists of only one 800 kg bomb or two 500 kg bombs. That being said, this measly amount barely has enough destructive power to destroy half a base. Instead, pillboxes will provide excellent sources of research points and will bleed enemy tickets. To kill pillboxes, take the 500 kg bombs with a two-second fuse. To set up a run, you will need to dive as soon as the match starts and need to be as close to the ground as possible to accurately bomb the pillboxes. Try to drop the bomb just a little before the crosshair, due to a slight delay in the bomb drop. This shouldn't be too noticeable, so just remember to release the bombs a little before you typically would release them. After destroying two pillboxes, destroy lightly armoured targets with your turrets, or, if there are enemy fighters inbound, go in a straight line for your home base and keep your speed high. Reload, repair, and get back out on the next target! The Ginga can make many bombing runs in one match thanks to its speed.

Unfortunately, there might be a problem on Pacific maps as carrier landings in the P1Y1 are tricky. If the carrier is moving, your option is to try to land on it. Drop your speed to around 165 km/h (100 mph), with landing flaps and gear, but without airbrakes. Next, land on the very edge of the carrier and retract flaps and use airbrakes. If you break a wing on the tower, it should stop and repair you. However, if the carrier isn't moving the safest option is to belly land. Try going as slow as possible and try to land flat, not tail first. Snapping a wing on the tower is a good idea because it will aid in bringing you to a full stop.

The Ginga has solid engines, providing a maximum combined 3,662 units of horsepower on takeoff. They also come with a two-stage supercharger. The propeller pitch should be used at 90%-100% when on WEP. Lower the propeller pitch to 90% when at high speeds. The radiators can be kept at 10-20%, and the supercharger can be activated at 3.5 km (11k ft), and the mixture can be set to the following at each specific altitude:

In order to stop the US naval Task Force's offensive towards Taiwan and Okinawa, the Imperial Japanese Army and Naval aviation corps launched a campaign named "Operation Sho", later developed into the Formosa Air Battle off the eastern coast of Taiwan in October 1944. Japanese air power suffered great losses in terms of experienced airmen and aircraft during the battle. Japanese military also lost control of the skies over Taiwan. As a result, US air forces began to launch frequent strikes over Taiwan, Ryukyu, and Okinawa. In an attempt to reduce the damage caused by these continuous air raids, and to maintain the combat capability of Taiwan-based air units, the Japanese Army and Naval aviation corps decides to evacuate and scatter their units all over Taiwan. It was to save strength for the "Final Battle of Greater East Asia" and turn Taiwan island into an "unsinkable aircraft carrier". The Japanese Naval Aviation corps reorganized the units stationed in Taiwan at the beginning of 1945. The Second Tainan Naval Air Group was disbanded and reorganized into the 765th Naval Air Group on February 5, 1945. The reorganized Air Group was mainly equipped with P1Y1 "Ginga" bombers and D4Y1 "Suisei" bombers. Since the supposedly cutting-edge "Ginga" bomber failed to score any major battle results before the defeat of Imperial Japan, Japanese airmen often have sarcasm against the Ginga, that it was an useless masterpiece: "the country was war-torn but Ginga was not" (「国滅びて銀河あり」).

After the outbreak of the Chinese Civil War, the United States imposed an arms embargo on the Kuomintang Government. The ban lasted from August 1946 to May 1947, making it impossible for the Republic of China Air Force to obtain fighters and spare parts from the US. In order to maintain the combat effectiveness of their air power and help combat the communist troops in North and Northeast China, the ROCAF had to make full use of the leftover Japanese airfields and aviation equipment. Therefore, hundreds of surrendered Japanese aviation technicians and pilots were hired as instructors. Captured Japanese fighters are mainly equipped by reserve units like the 6th Air Group composed mainly of graduates of the Air Force Academy. As the performance and operating features of Japanese fighters differ a lot from American-made aircraft, and it was difficult to obtain parts for Japanese fighters after the war, the 6th Air Group of the ROC Air Force was finally disbanded at the end of 1946.

In an attempt to seize weapons to launch an armed riot against the autocracy, the Taiwanese rebels regarded air bases and arsenal left by the Japanese army as main offensive targets during the February 28 Incident. Therefore the Kuomintang Government believed that there were more air bases in Taiwan than needed and those bases were too scattered for proper management. As a result, 54 remaining air bases in Taiwan were planned to be reduced to 29 and the excess Japanese aircraft and weapons would be destroyed. The last surviving 12 P1Y1 "Ginga" bombers kept at the Tainan Air Force Base were disintegrated by the 7th Supply Department of the Air Force in October 1949.