The N-class is similar to the other rank II 4.3 destroyer, the Tribal, sharing an identical main armament and near-identical auxiliary batteries. While the N-class lacks the Tribal's powerful secondary battery and larger crew size, it makes up for it with a better top speed, more torpedoes, and a more effective AA battery. This makes the N-class something of a jack-of-all-trades, while also still giving it the powerful long-range firepower found on the Tribal.

The N-class' guns are the star of the show. While the 4.7-inch cannons lack the deadly rate-of-fire (RoF) of the American 5-inch guns, they still pack a hefty punch. They are also some of the most accurate destroyer guns in the game, only beaten in accuracy by the 100 mm guns of the Akizuki. Having four of the guns pointing forwards also allows the N-class to concentrate a constant, heavy barrage of fire directly forwards, allowing it to leave a smaller profile for enemy guns to hit. Make use of the N-class effectiveness at long-ranges and attack other destroyers from afar.

The main opponents to the N-class are destroyers with fast-firing guns (like the American destroyers and the Germans with the 12.7 cm guns), who can out-gun the N class effectively at close range. In addition, destroyers with fast torpedoes can make short work of the N-class, which lacks effective counter-torpedo capabilities and is a very easy ship to sink, thanks in part to its vulnerable ammo stowage. Lastly, the N-class should avoid cruisers at all costs. Cruisers can out-gun the N-class at any range, and some can even out-torpedo it as well. 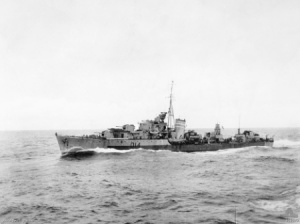