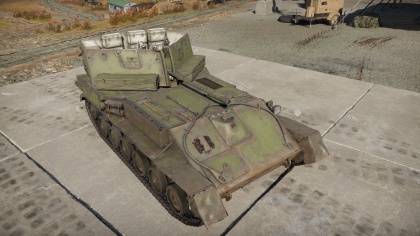 The ZSU-37 is a rank IV Soviet self-propelled anti-aircraft vehicle with a battle rating of 4.7 (AB/RB/SB). It was introduced in Update 1.43.

Since tank divisions were facing greater losses from attacks by enemy assault aircraft, the decision was made to create a self-propelled anti-air mount based on light tanks. Work on the creation of a self-propelled installation based on the T-70 tank began in 1942. Two experimental models were released. Serious design flaws were uncovered during the testing phase.

In December, 1943 the ZSU-37 SPG was built at Factory #38 under the management of M.N. Shukin. It was armed with a 37mm KB M.N. Loginov 61-K AA cannon. The vehicle was based on the SU-76M SPG, but instead of a combat cockpit they installed an open, rotating turret. An experimental model of the vehicle successfully underwent state-run testing and was recommended for serial production. However, due to production difficulties, serial production was moved to Factory #40 in Mytishchi.

The vehicle’s design was enhanced at the new factory, and, after undergoing testing in October-November 1944, the vehicle began to be released serially. The vehicle was released in a small series of 75 units from 1945-1946. It was never used in combat.