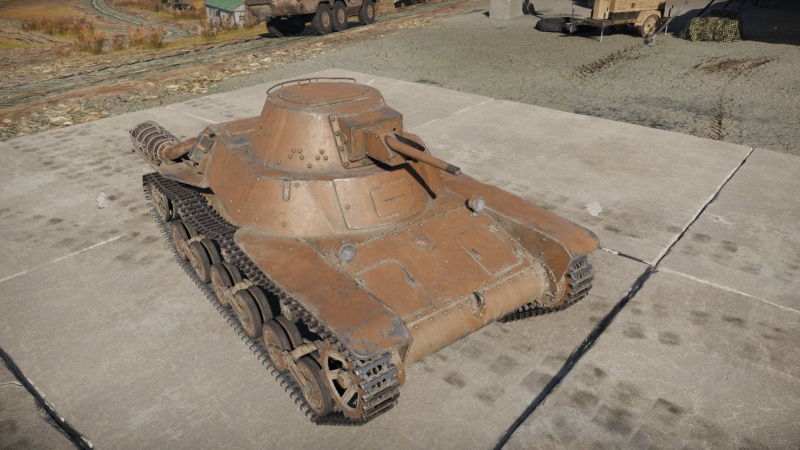 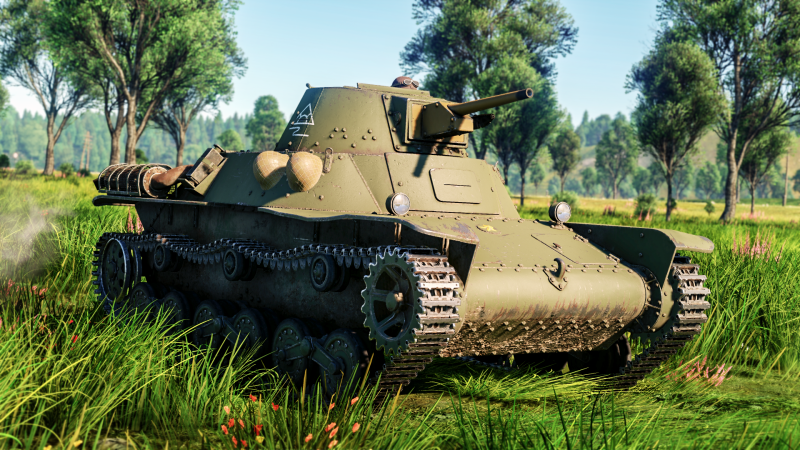 The Type 98 Ke-Ni (九八式軽戦車「ケニ」) is a reserve rank I Japanese light tank with a battle rating of 1.0 (AB/RB/SB). It was introduced along with the initial Japanese Ground Forces tree in Update 1.65 "Way of the Samurai".

With around 12 mm of armour all around, this tank is barely bulletproof. German and British machine guns can even knock you down at point-blank range. Your crew is cramped and not numerous, which makes surviving a shot extremely unlikely. This is definitely not the tank to expose to any kind of shots. With its small turret and impressive gun depression, hull-down positions improve this vehicle's survivability and should be sought whenever possible.

This tank is quite fast and can achieve surprising feats of mobility. Coupled with a good turret traverse speed, this tank can be reliably used in flanking manoeuvres. With its narrow tracks and good power-to-weight ratio, this tank is fast on almost any ground but easily loses speed on rough terrain, steep hills, and sharp turns. Another good characteristic of this tank is its reverse speed of -7 km/h, which allows it to effectively use overextend tactics (peek-a-boo).

Offering an improved gun and ammunition selection compared to the Ha-Go, this tank offers a good learning curve from its predecessor. Though this cannon does not have the best penetration at rank I, the trademark Japanese APHE has a good amount of HE filler and ensures that each penetrating shot deals damage. The gun only has one type of ammunition.

Being a light tank, the Ke-Ni cannot engage enemies head-on. To succeed in an assault, you need to be sneaky. Flanking, avoiding the enemy and going behind them is your best option. The 37 mm gun can penetrate most Rank I tanks if you hit their weak spots, though it may take a few shots to destroy an enemy. Your first shot should be to take out the enemy gunner so they can't retaliate. After that, take out their driver so they can't retreat. Never linger in an open field since anything can kill you with ease. Use your good gun depression to keep a hull-down position behind hills and just pop out to shoot. Hide in bushes or behind buildings or rocks. You are quite small, so use this to your advantage.

Only with the start of the Pacific war high command started taking note of how the American's .50 cal is enough to punch through the rather thin armour of the Ha-Go and eventually gave the light tank improvement contract to Hino with effective production starting in 1942. Though as many Japanese tanks and army manufacturing, production would be hampered by the Navy's resource priority leaving the total amount of Ke-Ni's built rather low at roughly 104 built.

Comparing the Ke-Ni to the Ha-Go, it featured thicker, welded armour of improved shape, the height of the tank was 50 cm lower in profile and slightly lighter and shorter. With the use of a Mitsubishi Type 100 6-Cylinder air-cooled diesel engine with 130 horsepower, it allowed the vehicle to travel at 50 km/h (31 mph) even with its thicker armour.

In contrast to the one-man turret of Type 95 Ha-Go, the Type 98 had a two-man turret, which featured additional room for a loader next to the gunner/commander. The gun was a Type 100 37 mm tank gun with vertical elevations of -15 to +20 degrees in the turret, a muzzle velocity of 760 m/s, and also a coaxial Type 97 (7.7 mm) machine gun instead of in the back of the turret.