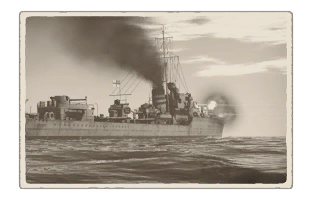 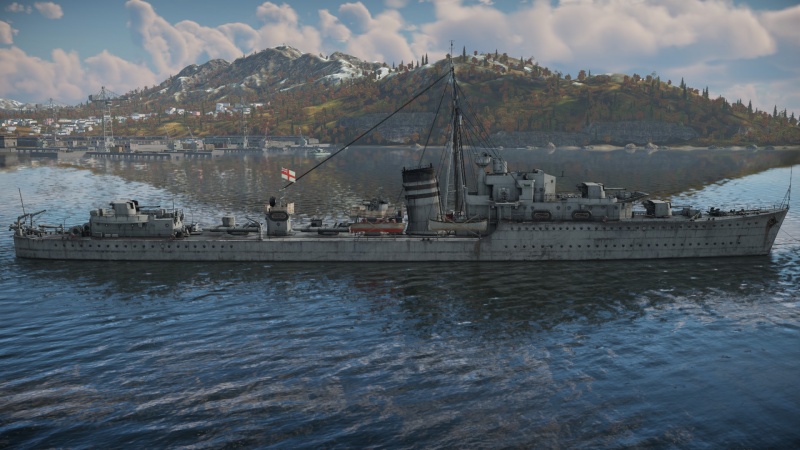 The secondary armament of the Kelvin consists of a quadruple 2-pounder 'pom-pom' mount. This weapon is mounted amidships, behind the funnel, and is primarily an anti-aircraft weapon. However, it can be very deadly against coastal craft due to its high rate of fire and relatively potent 40 mm rounds.

In addition to the 'pom-pom' mount, the Kelvin carries two quadruple Vickers .50 cal heavy machine gun turrets. The heavy machine guns have a high rate of fire, but a fairly long reload. It is effective against aircraft at close range, as well as against unarmoured coastal attack craft, but is mostly useless against armoured targets or other destroyers.

The K class, HMS Kelvin (F37) was a British destroyer of the K class, built for the Royal Navy during the Second World War. Designed as a follow-up to the preceding J class, the ship was designed as a Tribal-class destroyer with more focus on guns and less focus on torpedoes. HMS Kelvin was laid down in October 1937 and commissioned by November 1939. She saw some service during the Second World War, including the task of transporting British Prime Minister Winston Churchill across the English Channel after the D-Day invasion. HMS Kelvin survived the war, and was scrapped by 1949.

The J, K and N class destroyers were a group of three classes of destroyers built as a follow-up to the preceding Tribal class. At that point in time, the British Admiralty experienced a shift in destroyer doctrine which favoured guns over torpedoes - this trend was continued through the war until the introduction of the Battle class. HMS Kelvin was armed with a main armament of three twin 4.7 inch (119 mm) QF Mark XII dual-purpose main guns, with two fore and one aft. She also carried a secondary armament of a single quad pom-pom anti-aircraft gun, along with two quadruple 12.7 mm anti-aircraft machine guns. HMS Kelvin did not carry any torpedo tubes, but could carry depth charges for anti-submarine warfare. Powered by steam turbines delivering 44,000 shp, she could make 36 knots (67 km/h).

The HMS Kelvin was commissioned by November 1939 and entered service with the British Navy in the British 5th Destroyer Flotilla. She would later scuttle the destroyer HMS Ivanhoe after the latter struck a mine during the Texel disaster. She escorted the battleship HMS Revenge as she bombarded the port of Cherbourg, and was subsequently reassigned to the British Mediterranean fleet under Admiral James Somerville.

After arriving in the Mediterranean theatre, HMS Kelvin's first action was to bombard the town of Benghazi with her sister ships Kashmir, Kelly, and Kipling. She survived this action with little loss of life, but needed repairs and was thus sent all the way to Bombay in India. By March 1942, she had returned to the Mediterranean, and took part in the Second Battle of Sirte, where her convoy was attacked by a formidable Italian force including the battleship Littorio.

Later in 1942, Kelvin contributed to the sinking of the Italian torpedo boat Lupo, alongside the J-class destroyers Jervis, Janus, and Javelin. In January 1943, she bombarded the port city of Zuwara which culminated in the Battle off Zuwara, where the destroyers sank an Italian convoy attempting to evacuate from Tripoli. She then left the Mediterranean theatre yet again, to be refitted back in the UK. In June 1944, she transported the British Prime Minister Winston Churchill, along with various other foreign leaders, across the English Channel to inspect the troops that had landed in the D-Day landings. She then returned to the Mediterranean theatre, where she would stay for the rest of the war. HMS Kelvin survived the war and was broken up for scrap in 1949; she earned eight battle stars for her service during the Second World War.