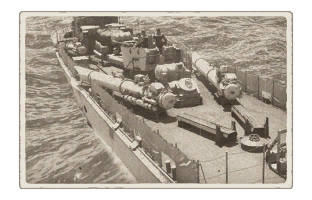 The Schnellboot Jaguar-Klasse (140) is a rank V German motor torpedo boat with a battle rating of 4.0 (AB/RB/SB). It was introduced in Update 1.79 "Project X" as part of the fleet closed beta test.

Load the ship with AP or universal rounds, it's important to note that this ship cannot engage well at long distance anything over 3000 Meters should not be engaged with the cannons. The ideal range for enemy ships to be engaged at are under 2500 Meters, where it is possible for each round to be traced, tracked and adjusted to hit the enemy.

Enemy destroyers will often be focused & locked on other destroyers or larger prey. However, sometimes they will notice, take evasion by heading in the splash of their shell's, to avoid the shell's hitting the ship. Head into them, then turn suddenly and repeat until you are within torpedo range. Additionally, if the enemy destroyer is very close within 1500 Meters, Target their main and secondary weapons with the 40mm cannons to knock them out and get as close as possible before releasing the torpedoes. One good hit, ideally to stern or bow will result with the enemy ship sinking!