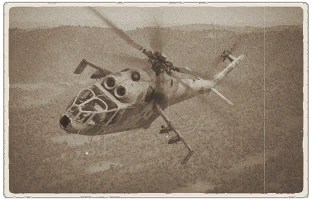 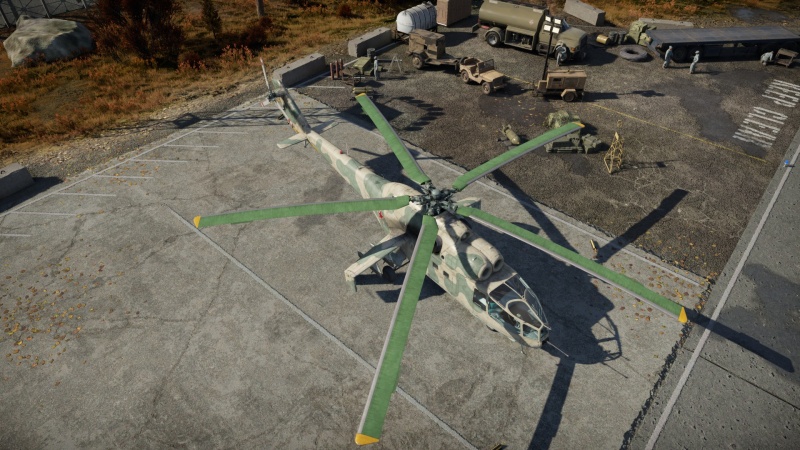 The Mi-24A is a rank V Soviet attack helicopter with a battle rating of 9.0 (AB/RB/SB). It was introduced in Update 1.81 "The Valkyries".

The Mi-24A is the first production version of the Soviet attack helicopter Mi-24. Envisioned by the Mil Design Bureau as a "flying BMP", it could carry a squad of infantry into battle and provide close air support with its heavy armament. In-game, the Mi-24A functions purely as an attack helicopter. It can be easily distinguished from the later Mi-24 variants by its "greenhouse-style" cockpit.

The Mi-24A is a significant upgrade over the preceding Mi-4AV in almost every respect in terms of performance. The twin TV3-117 turbine engines make it much faster in level flight (in fact, one of the fastest helicopters in the game) and it can also accelerate fairly quickly. It does, however, have a fairly underpowered tail rotor, and thus has poor yaw authority. It is much faster to use a banking turn in order to change direction quickly. The Mi-24A also maintains a good climb rate, even while carrying a full combat payload.

The Mi-24A is the first Soviet attack helicopter to feature armour plating around the flight crew and engines. The protection consists of 4 mm steel plates around the sides of the cockpit, the sides of the engines and main rotor, and the pilot's seat, as well as 55 mm of bulletproof glass for the front windshield. All fuel tanks are self-sealing, but unprotected by armour plating. These features significantly improve the survivability of the Mi-24A over the fragile Mi-4AV, especially to rifle-calibre fire, though it is by no means immune to ground fire.

It is highly recommended to research the K-4V modification, which unlocks the Falanga anti-tank missiles, as soon as possible because the basic S-5K unguided rockets are relatively inefficient against tanks and their short range requires you to get within range of SPAA.

The Mi-24A has similar armament options to the Mi-4AV, though it can carry significantly more S-5K rockets and the heavier 500 kg bombs. It is also equipped with a ballistic computer, which significantly eases aiming the unguided rockets. It is important to note that the Mi-24A carries OFAB-250 bombs, which have lower explosive content than the FAB-250M-43 bombs on the Mi-4AV.

The Mi-24A has very limited capability against other aircraft or helicopters, and must usually resort to using the machine gun. The Falanga missiles are quite slow and do not have proximity fuses: they must directly hit their target in order to explode, which means they are of questionable utility against moving helicopters and useless against aircraft.

The Mi-24A can be outfitted with the following ordnance:

The Falanga anti-tank missile is the primary anti-tank weapon of the Mi-24A. With a range of 4 km, it can outrange most conventional SPAA, which are effective out to around 3 km. However, it travels relatively slowly (220 m/s) and has SACLOS guidance, which requires the pilot to keep the sight crosshair on the target until the missile hits. At the maximum range of 4 km, this means that the helicopter must remain relatively steady for around 20 seconds, during which time the helicopter will be an easy target.

The Mi-24A is the first true Soviet attack helicopter. Its high speed (for a helicopter) and decent armour protection make it somewhat similar to the Ilyushin Il-2 ground attack aircraft, and it can be played in a similar fashion if there is no significant anti-aircraft opposition: it can use its high speed to pull off attack runs, delivering unguided rocket barrages or bombs like a fixed-wing aircraft. If necessary, it can also function like other anti-tank missile-armed helicopters, using the 4 km range of the Falanga anti-tank missile for stand-off attacks beyond the range of most cannon-armed SPAA.

The biggest threat to the Mi-24A is aircraft, as the helicopter is severely lacking in anti-aircraft weapons other than the machine gun. The Mi-24A is also quite vulnerable to cannon SPAA if it gets within range, as it is a fairly large helicopter and the 4 mm steel plates will not do much against the 20–35 mm cannons normally found on SPAA. Surface and air-to-air missiles are also a significant threat, as the Mi-24A does not have any countermeasures and is not sufficiently agile to reliably evade missiles.

In studying the possibilities of helicopter design and the experience of other countries, Mikhail Leontyevich Mil came to the conclusion that a well-armed and armoured battle helicopter was required to increase the mobility of the Soviet Army. It had to be capable of transporting cargos and paratroopers – a kind of flying armoured car. In contrast to the American army, in which troop transport helicopters operated with cover from assault helicopters, Mikhail decided to create a vehicle that could handle both these tasks on its own. The engineers at the Mil design bureau already had considerable experience in developing helicopters, and had performed several experiments in transforming transport helicopters into assault helicopters. This meant that after military officials approved the concept of an assault-transport helicopter, the team immediately got to work. In the summer of 1969, literally a year after the work had begun, the Mil engineers presented a prototype for testing.

The first version of the Mi-24 already had the characteristics and features familiar to all fans of military vehicles found in the later series-produced versions, the Mi-24B and the Mi-24D. The characteristic silhouette for which the Mi-24 was dubbed "Hind", two TVZ-117 turboshaft engines, retractable landing gear, a cargo bay for paratroopers and wings for mounting weaponry. However, there were differences also. The tail rotor on the Mi-24A was placed on the right – it was only moved to the left side in 1974. A single cabin was mounted on the Mi-24A with a flat glass, a so-called "Veranda" in which the armament operator and the pilot could sit one behind the other with a slight offset. The main difference was the armament. By the time the Mi-24 was created, the weaponry that the military demanded for the new helicopter – modern Shturm ATGMs with an advanced aiming kit, and a rapid-firing machine gun for the rotating nose turret – was not yet ready. The first versions of the Mi-24 were equipped with the Falanga-MV ATGM with manual aiming, the single-barrel A-12.7 in a turret with limited mobility on the nose with a simple collimator sight, and unguided rockets or up to 1000 kg of bombs on the wing hardpoints. Officially, the Mi-24A was never accepted into service, although quite a lot of the vehicles were built – along with the training versions, over 240 in total. The Mi-24A was exported, and took part in military operations in Ethiopia, Afghanistan and Libya.