Difference between revisions of "Martin 167-A3" 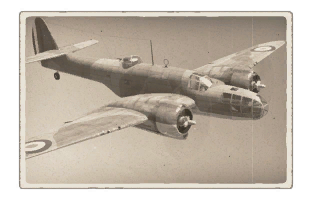 The Martin 167-A3 can be outfitted with the following ordnance:

The Martin Model 167 medium bomber was developed as a response to a set of requirements issued by the USAAC in 1938. Following these requirements, Martin developed its Model 167 bomber, which received its official testing designation of XA-22. However, despite showing favorable performance, the XA-22 lost out to the Douglas DB-7 (which became A-20 Havoc) during the competition, which resulted in Douglas getting the contract with the USAAC. What would usually spell disaster for most projects that suffered a fate like this, turned out to not to be the case for Martin's design. With an armed conflict looming over Europe, nations such as France and the UK were desperately stocking up with any military equipment that was on offer, including aircraft. France in particular was looking into buying any available aircraft from manufacturers abroad as the domestic production was limited. These manufacturers were in many cases American companies, just like Martin. In any case, the first orders for French export versions of Martin's new bomber soon came in, effectively sparing the project from ruin.

The first order called for more than 200 Martin 167s to be built with certain modifications made to optimize it for French use, such as the installation of French armament, including guns, metric instruments and different engines. Martin, eager to fulfill the order, nearly doubled production and managed to manufacture over 100 aircraft in the space of six months. However, the shipment of ready units was delayed until October 1939 until the U.S. arms embargo was lifted. During this period, the French placed an order for an additional 100 aircraft to be made. However, before the order could be entirely fulfilled, France had been occupied by Germany in June 1940 and only 25 further aircraft made it to France after the initial batch. Nonetheless, the units that made it to France performed well in combat, out matching some of France's domestic bomber aircraft, such as the LeO 451 in combat efficiency and loss rates. Once the armistice was signed, the remaining aircraft were transferred to the African theater of operations, placed under Vichy command and took part in bombing missions against allied positions. In 1943, the Martin 167s stationed in Africa were replaced by newer allied aircraft once the local French forces joined the allies again. A total of around 450 Martin 167 bombers were manufactured and the aircraft continued to serve among the ranks of the French and British air forces until 1945.