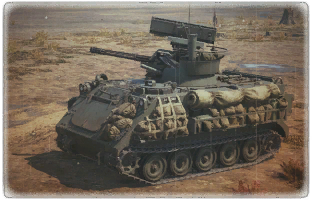 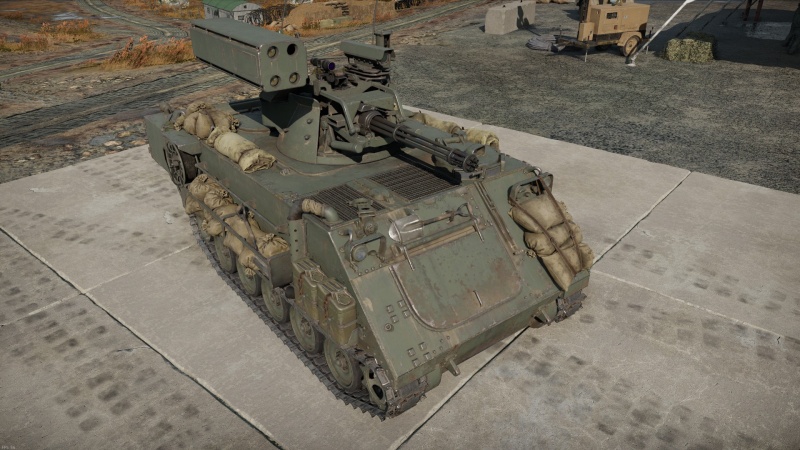 The Machbet is a rank VI Israeli SPAA with a battle rating of 9.3 (AB/RB/SB). It was introduced in Update "Wind of Change".

An upgrade of the Hovet, the Machbet features 4 all-aspect infrared-tracking Stinger missiles that allow it to engage long-range targets and an IRST tracker that is more reliable than the AN/VPS-2 which also doesn't trigger aircraft RWRs.

Despite its thin armour, the Machbet has the particularity of being able to withstand some misplaced shots, but pay attention to HE shells that are able to destroy instantly the vehicle .

Beware also of tanks equipped with machine guns above 7.62 mm calibre, these tanks can easily penetrate the sides of the vehicle.

While not being the fastest vehicle, especially while stock, the Machbet lack power in slope but on flat ground , he can handle himself pretty easily.

The Machbet is equipped like the M163 with a 20 mm M168 VADS, or Vulcan air defence system. The M168 is a variant of the M61 cannon, which can be found in-game on vehicles such as the Japanese T-2, and the American F-4C Phantom II. Used initially during the Vietnam war, the M168 was a 20 mm air-cooled rotary cannon attached to a small turret on the Machbet. Dangerous to anything in the sky below 2 km, it will lock on and rip through anything in its path. Helicopter and plane will be crippled effectively.

The FIM-92 E and K are effective weapons but only under certain conditions. With turns at 10 G maximum, the missile will not be able to follow some aircraft unless the angle is favourable. Opportune moments to hit an aircraft are when it is facing directly towards the missile launcher or flying directly away from it. The K upgrade of the missile is more likely to hit due to its proximity fuse with a trigger radius of 5 m. Helicopters, on the other hand, have a good chance of being hit due to their low altitude. Without the use of countermeasures, the missile can be sure to hit a helicopter. However, missiles may have a hard time acquiring helicopters if they are low to the ground, and helicopters may use the terrain to mask themselves or evade incoming missiles.

The Machbet is a very good anti-aircraft vehicle if its capabilities and limitations are managed. It excels in many areas behind the front lines, either directly supporting allies during an assault or back towards spawn or capture points to maintain security.

Difficulties will be met around BR 10.0 matches as multiple aircraft types will have access to countermeasures able to defeat the FIM-92 Stinger missiles.

After the M163 VADS began being decommissioned from American service, the vehicle was heavily exported to foreign operators. Israel was one of several states which adopted the M163 VADS into its own military under the name 'Hovet' in the early 1980s. By the early 1990s however, it was realized that the system required modernization. As such, the IAI company was tasked with developing an upgrade package.

Together with General Dynamics, IAI upgraded the Hovet's fire control system and equipped the vehicle with a Stinger missile launcher, in an effort to increase the vehicle's effectiveness against low-flying jet aircraft. Following successful testing of the prototype in 1997, the vehicle was formally accepted into service with the IDF under the name 'Machbet' in 1998. In the upcoming years, several of the older Hovets were modernized to the Machbet standard. However, the Machbet only saw a short service life with the IDF. Because of changing tasks and requirements, the Machbet was officially withdrawn from active service in 2006.