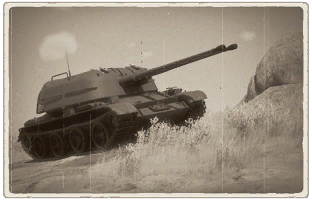 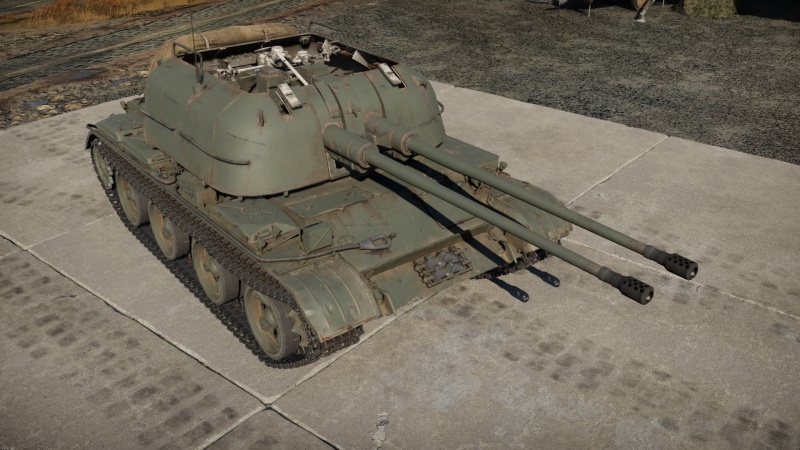 An SPAA built on a heavily-modified T-54 chassis, the ZSU-57-2 features two powerful 57 mm guns, good mobility, and very light armour. It has proven to be more of a menace to ground vehicles than aircraft with its high-velocity cannons, but low sustained rate of fire and poor accuracy.

ZSU-57-2s were captured by Israel from Egypt and Syria during the Six-Day War in 1967 and the Yom Kippur War in 1973. It is otherwise identical in all aspects to the Soviet ZSU-57-2.

The ZSU-57-2's mobility is rather good. It is faster than most medium tanks, while weighing 28 tons and having a 520 hp engine at 2,000 RPM. Manoeuvrability is good at all speeds, as its a relatively light tank with a powerful engine. It bleeds a lot of speed while turning, but the turning is fast and responsive and does not have neutral steering. The maximum speed is limited by the transmission to 51 km/h forwards and -8 km/h in reverse for RB, and 55/-9 km/h for AB.

Although this is an AA vehicle, its twin 57 mm cannons are still equally deadly against ground units. When stock, their accuracy isn't good so the shells fly all over the place as the distance increases, and the belt is made up of half AP, half HE, meaning it is not efficient when dealing with either planes or tanks. Therefore the best tactic for a fully stock ZSU-57-2 is to shoot the enemies' side up close or to target low-flying helicopters.

When the BR-281 belt (full APHE) is available, the player can go into full anti-tank mode as this shell packs quite a punch, and it can penetrate pretty much any tank's side armour (excluding the Maus, in which case take out its gun barrel) and some tanks' frontal armour. In a flank the ZSU-57-2 can finish off a group of opponents at an unbelievable speed. Two shells will slice through their side armour and explode, so theoretically one clip is enough to wipe out four tanks in a row (aiming at the crew compartment only, of course). A few seconds later, another clip will be loaded, ready to hunt more prey. Be aware that each clip only contains 8 rounds (4 for each of the two cannons), so do not waste your shots.

This shell also performs alright in the AA role, since its calibre is quite large for planes, and a direct hit usually critically damages the plane, if not killing it instantly. However, unlike its Chinese brother, WZ305, the ZSU-57-2 does not have access to any VT shells so it is always beneficial to lead with extra care and only open fire if the plane is close enough.

The BR-281U belt does not offer any extra penetration and thus should not be used. Its efficiency decreases as half the belt is made up of HE shells with no anti-armour potential.

Versatile in the anti-aircraft and anti-tank role, this heavily modified T-54 chassis delivers two heavy 57 mm punches. The ZSU-57-2 can be used for two roles.

Even though the ZSU-57-2 was designed as an SPAA, it is not very good at destroying planes compared to other SPAA vehicles at similar battle ratings, which often have a significantly higher rate of fire or even radar. However, this is compensated for by its comparatively massive firepower compared to similar SPAA platforms. The large 57 mm cannons will often disable, or more likely destroy a plane with its first hit. It is also extremely effective in an anti-helicopter role, as helicopters are much slower than planes.

Using the 57 mm cannons in an anti-tank role is possible and have been exploited by many players. Using BR-281 ammo, the guns can effectively pierce the sides and rear of any tank (excluding the Maus). Remember the ZSU-57-2's armour does not compare to other tanks armour so one shot could be the end of the SPAA. Play cat-and-mouse and wait for the enemy to go into an engagement with another target and then jump out into the open and fire upon them while they are distracted. It is recommended to the first aim for their rear to disable their engine and cause a fire, they will have to stop what they are doing and put it out. During this time they won't be able to move or fire upon the ZSU-57-2, allowing a chance to finish off the crewmen inside by unloading the 57 mm cannons into the side of the enemy tank. Any shot from the 57 mm cannons into an enemies' ammo load will also instantly kill them. Almost all British tanks have very weak side armour, and your BR-281U ammo will easily rip through even at an angle. Aim for the front portion of their tank, where their driver is. Their ammo rack is located right next to the driver, meaning that you can easily ammo rack them.

After being captured by Israel from Egypt and Syria during the 1967 war, they were repainted in Israeli sand camouflage, and given IDF numbers. They were paraded in Israel's independence parade along with other captured equipment, however they did not enter Israeli service.