Difference between revisions of "PT-59" 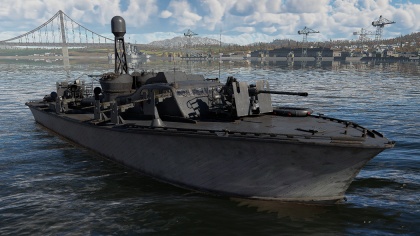 The Elco 77 ft PT-59 is a rank III American motor gunboat with a battle rating of 3.0 (AB/RB/SB). It was introduced in Update 1.79 "Project X" as part of the fleet closed beta test.

The boat Hull and Superstructure are made of wood(40mm and 15mm respectively), the Bofors L/60 Mk 3 cannons have a 9.52mm shield and the Hull mounted AN-M2 machine guns have a 12.7mm shield, the elevated AN-M2s don't have any gun shield.

Despite his lack of armor, the PT-59 has enough firepower to outmatch most boats at its Battle Rating(3.0), however engaging more than 2 boats at once without having friendly support isn't recommended, you should also be careful when going against armored gunboats and boats with much bigger crews.

Main article: Bofors L/60 Mark 3 (40 mm)
The Bofors cannons takes around 10 seconds to do a full 360 degree turn, The bow cannon is limited to a 190 degree range and the cannon at the aft is limited to 280 degrees, the cannons overheat after firing for 15 to 17 second consecutively, the cannons become almost ineffective at ranges above 2Km(1.25Mi, 6560ft).

The AN- M2 machine guns can fire until they run out of ammo, overall these are mostly used against smaller boats and planes, mostly ineffective at ranges above 1Km (0.62Mi, 3280ft).