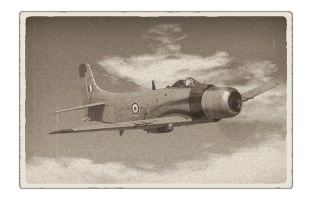 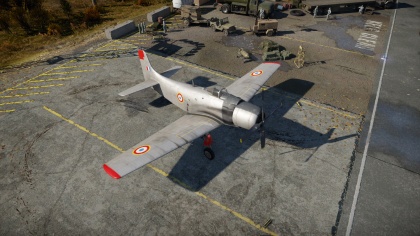 Considering the size, weight, and engine of the aircraft, the AD-4 still maintains a good top-end speed and gets there in a reasonable time, though nowhere as fast as comparable fighters get to theirs. Skyraider pilots will find their plane able pull a great instantaneous turn rate to keep up with fighters or other aircraft that end up on the business end of the AD-4's cannons, though their plane will very quickly lose a lot of speed thanks to its incredibly high weight. Sustained turns are not a strength of the AD-4 by any means, and the introduction of any verticality into manoeuvres will emphasis this weakness even further; the plane has rather terrible energy retention.

The AD-4 also has a single, large self-sealing fuel tank placed behind the pilot's steel plate. The oil cooling systems are found behind the engine, protected from ground fire by the same steel plates. Both of the steel plates are capable of preventing the penetration of HE shells, as well as thick enough to block AP shells from 7.92 mm machine guns at longer ranges, and 7.62 mm machine guns at all but point blank ranges, giving the AD-4's engine and pilot excellent survivability from rifle-calibre ground fire.

The four cannons are arranged in bundles of two mounted in each wing. Each has an ammunition load of 200 rounds, and all fire simultaneously. All cannons exhaust their ammunition supply at the same time.

The AN/M3 is an excellent all-rounder cannon, dealing consistently lethal damage to enemy aircraft with both API-T and HEF-I shells, but also being able to pierce lightly armoured tanks with API-T shells, which can penetrate 27 mm of RHA at 500 m, enough to deal with nearly every light tank the AD-4 will encounter. However, the AN/M3's accuracy without the "New 20 mm Cannons" modification is exceptionally poor, with hit probabilities outside of 500-600m becoming very low due to high bullet spread.

The AD-4 (France) can be outfitted with the following ordnance:

The AD-4 is a well-suited aircraft for its primary role—ground attack—and provides the pilot with a large variety of highly effective payload options for dealing with different types of targets. Depending on the pilot's preference, the French AD-4 has access to over twenty options for suspended armaments, consisting mostly of different types of bomb/rocket hybrid payloads.

There are three primary rocket selections available to the French AD-4; twelve HVAR rockets, twenty-four T10 151 AP rockets, and twenty-four T10 140 HE rockets. Each rocket type can be used with the full range of hybrid payloads, which includes a Mk.13/44 torpedo, two Tiny Tim rockets, or a selection of bomb set-ups including 2,000 lb bombs, 1,000 lb bombs, 500 lb bombs, or combinations of the three as listed above. Your choices will vary based on your expected target type and game mode. T10 T151 rockets plus two Tiny Tims, for instance, may be the best option for dealing with enemy anti-air in ground

The AD-4's biggest enemy is opposing fighter planes. The Skyraider is a massive, heavy, and difficult to manoeuvre target, and enemy fighters will have no trouble sticking to one like glue. AD-4 pilots will need to take this into consideration when entering the combat area. The AD-4 is quite survivable, so it can take head-ons in spite of its wing-mounted guns, and deal considerable damage with the AN/M3s, though it may often be better to wait for friendly fighter cover or retreat immediately to allied anti-air once the threat of enemy air arises.

The AD-4 is part of a long line of piston-engined attack aircraft developed by the Douglas Aircraft Company, starting with the A-1 Skyraider, seeing service across the globe in various ground strike roles. The variant of the French AD-4 represented in War Thunder is the French AD-4NA, a variant of the formerly three-seated AD-4N night attack plane which was converted to a single-seated attacker in American Service before being sold to France, though France did also come into possession of the AD-4N.

Having notably served during the Korean War under the USN and USAF, the Skyraider attracted many potential buyers including France who acquired 40 AD-4NA and 53 AD-4N aircraft from the US Navy Surplus in 1959. The Skyraider saw service in France's Armée de l'Air starting in 1960, during the Algerian War being sent against the Front de Libération Nationale, a movement fighting for the independence of Algeria from French rule. When the country gained independence in 1962, the AD-4 was relegated to service in Djibouti, then called the French Territory of Afars and the Issas. The French AD-4s last saw combat in Chad, where the French used them to support the government against Islamic guerilla forces in the area.

These French AD-4s were subsequently sold onwards to other countries such as Cambodia and Chad, where they saw further use under those flags.[1]