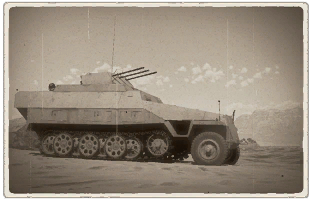 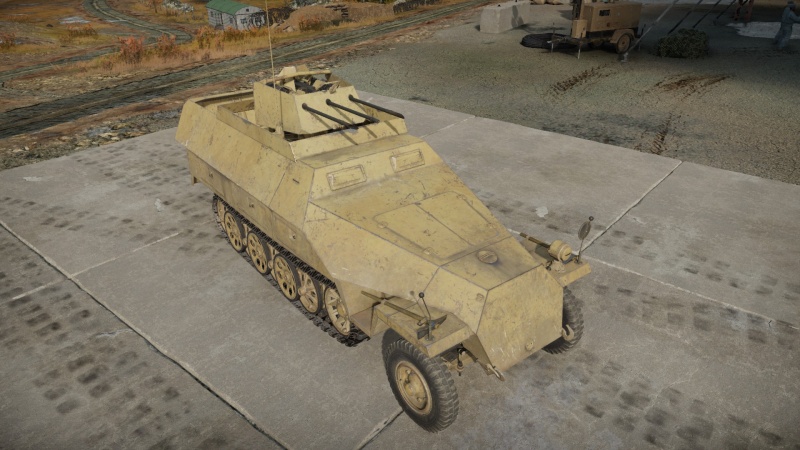 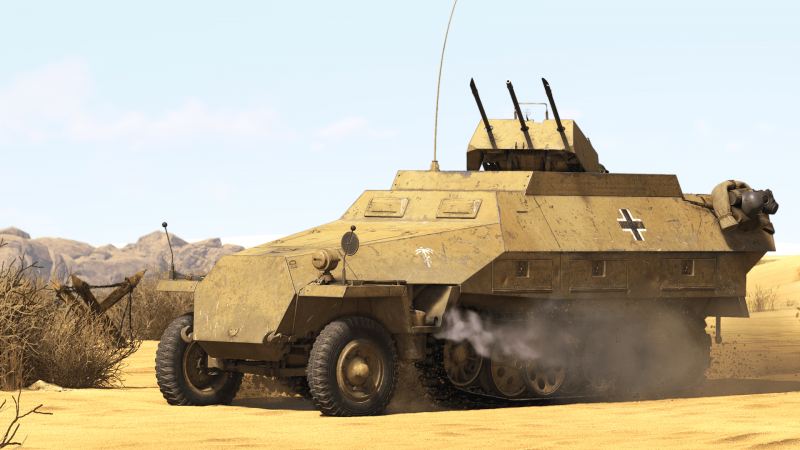 Armour is practically nonexistent with this vehicle at only 14 mm maximum. Notable weak spots are between the gunner and driver section, where the ammunition is stored. Four crew members are used with operating this vehicle, a driver, commander, loader, and gunner. It is typical for such a lightly armoured vehicle as this to stay behind in the spawn area, keeping an eye out for planes. Planes are usually an easy target to take down with your rapid firing 15 mm machine guns, so long as you don't use H-Pzgr, which will most often over-penetrate and cause less damage. 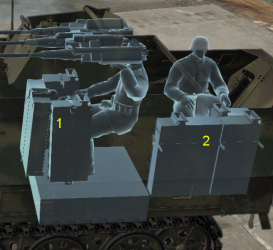 Because the Sd.Kfz.251/21 lacks any sort of effective armour, it is highly recommended that you stay behind at spawn point, keeping an eye out for aircraft. It is ill-advised to try to engage ground vehicles as long as you haven't researched the H-Pzgr modification. This belt can penetrate 51 mm of armour at 10 m, so it is better to flank and shoot for lower side armour if possible. Beware of heavy tanks such as the KV-1: their minimum armour thickness is 75 mm, so that renders this heavy tank immune to your shots. Avoid if at all possible, but if you can't avoid, damage the cannon barrel and the tracks to give you time to escape.

In terms of engaging air, one should attempt to understand the importance of these principles; "Distance, lead, fire and hide". The Sd.Kfz.251/21 is such an under-armoured anti-air vehicle that it is recommended to only engage aircraft you are sure will be quickly dealt with, or incredibly close to you. Distance should be a large factor of how you pick targets, if you are not able to see the aircraft in full flying over a point or even your mini-map, do not engage at all. If the aircraft is near, continue on to the next step, leading the target. Leading is a vital learning curve of all beginning anti-air players and can often be quite difficult. The calibre of your main armament is a huge factor, as some former anti-air in the German tree are cannons that require more or less lead time. The Sd.Kfz.251/21 is one of the best vehicles to help teach how to lead aircraft, and it does not require excellent aim either, just aim for the important parts of an aircraft and spray and pray, but be conservative with your ammo and be sure not to jam your guns. Hiding after engaging is very important on the Sd.Kfz.251/21, as even a small spray of fire from an aircraft will render you useless. Hiding behind tall buildings and under tree cover is excellent after engaging, but be sure that you are not running into an enemy tank.

While playing with this vehicle, it is recommended to hide behind cover (a building, a cliff, or a rock formation) and always find the location of enemy aircraft by sound. When the enemy plane is in a dive, pull out of cover and hit your enemy with a fatal blow. The high muzzle velocity is helpful for predicting shots. At the same time, due to the limited elevation angle, it is recommended to find a place with a slope. A smart enemy will destroy you through a vertical dive, and the slope will supplement your elevation angle to help you destroy the target.

By 1942, German engineers recognized the need of the Wehrmacht for a light SPAAG to provide cover for frontline troops against low flying aircraft and set about developing a suitable vehicle on the chassis of available halftrack designs. In 1943, this need became even more emphasized with limited German production capacities being unable to produce the required number of Flakpanzers that the Wehrmacht had been requesting.

Subsequently, German engineers decided to outfit the widely used Sd.Kfz. 251 halftrack with a three-barrel AA mount, initially equipped with 15 mm, later with 20 mm cannons, in order to meet the Wehrmacht's demand. The new modification became known as the Sd.Kfz 251/21 and went into production in 1944.

By the time the Sd.Kfz. 251/21 entered service, troops more widely used it as a support vehicle in the late stages of the war, with the vehicle performing well in this role. Nonetheless, over 380 units of the Sd.Kfz. 251/21 were produced until the end of the war, many of which through conversion of older modifications.