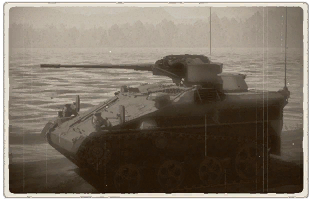 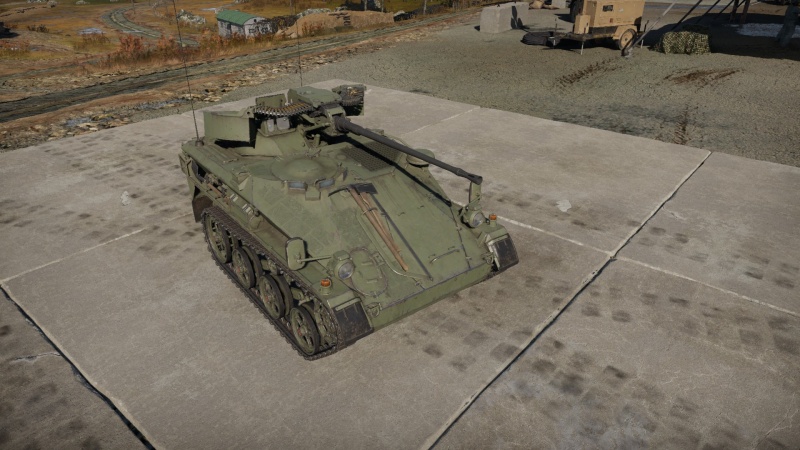 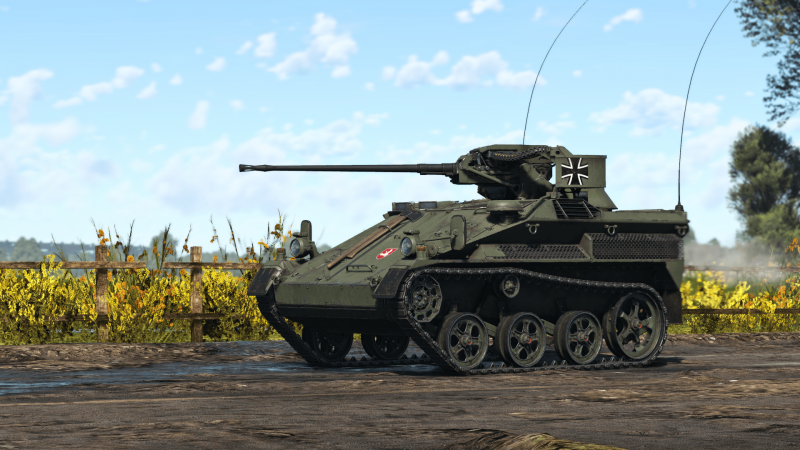 The Waffenträger Wiesel 1A4 MK is a rank V German SPAA with a battle rating of 7.0 (AB/RB/SB). It was introduced in Update "Ground Breaking".

The Wiesel 1A4, while very weak in both armour and armament, is very small and fast compared to most other vehicles at its BR. Given the ability to spot, use thermals, and help teammates with repairs, the Wiesel handles a lot closer to a light tank than an SPAA as it has very limited gun elevation at 45°. Even with its poor elevation, the Rh202 is capable of taking down aircraft found at its BR such as the Su-9 as well as lightly-armoured vehicles like the U-SH 405.

The armour is very thin throughout the vehicle, only able to protect from shrapnel and rifle-calibre machine gun fire. Anything with a calibre of 12.7 mm or larger will penetrate. The external fuel tank provides a minor increase in protection, but is still able to be penetrated by large-calibre machine guns. The interior armour provides minor protection to spalling and small shells, but isn't guaranteed to stop anything above 12.7 mm upon penetration. Two vents can be found on the tank with 5 mm of armour, one on the top above the radiator and the other in the middle of the left side, while not much of a difference, if shot at the right angle rifle-calibre machine gun fire can penetrate. The driver and gunner are sitting in a line if looking directly from the front or at a slight angle, which increases the likelihood of getting both knocked out with a single shot. Moreover, as there are only 2 crew members, losing even 1 man will knock out the vehicle unless on a point with crew replenishment. 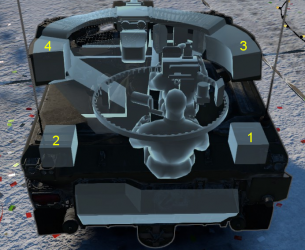 Ammo racks of the Wiesel 1A4

Given the size and speed of the Wiesel, it is very competent at flanking or rushing objectives. With the ability to spot and use thermals, the Wiesel can help its team by spotting enemies when flanking, or help its team by assisting with repairs and shooting down low-flying aircraft. Because of the minimal armour though, the Wiesel will almost always die from a single shot because of this, being alone in open areas or near enemies is not a good idea.

Initially developed in 1979 by Rheinmetall for the Bundeswehr as an airborne light armoured vehicle, the Wiesel was equipped with Rheinmetall's own Mk 20 RH-202 20 mm autocannon and designed to be small enough to fit inside standard NATO transport aircraft and even the CH53G Sea Stallion helicopter. The Wiesel was supposedly capable of being air dropped alongside airborne elements and was meant to act as armoured support for airborne troops though this idea was abandoned due to many failed tests. The Wiesel 1A4 was designed to combat infantry, tanks, armoured vehicles, and even aircraft. The Wiesel program was temporarily shut down in 1978 due to a lack of adequate funding though continued development later after interest was heard from other countries. The Bundeswehr eventually ordered 343 Wiesels in 1985.

The Wiesel 1A4 first saw service in 1993 as a part of the UN mission to Somalia (UNOSOM II) as part of the German peacekeeping force. Soon after, the Wiesel participated in NATO's Implementation Force (IFOR) which took place in Bosnia and Herzegovina from 1995-1996. Continuing after was NATO's Stabilization Force (SFOR) also taking place in Bosnia and Herzegovina from 1996-2004. It participated in yet another NATO mission in Kosovo as part of the Kosovo Force (KFOR) from 1999-Present (2022). The Wiesel then was a part of Operation Essential Harvest taking place in the Republic of Macedonia in 2001 to combat insurgencies. Lastly, Wiesel took part in the International Security Assistance Force (ISAF) in Afghanistan from 2001-2014.