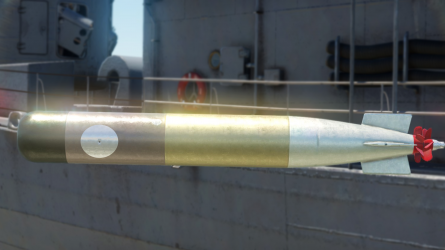 The 12.75 inch Mark 46 is an American lightweight anti-submarine torpedo. Currently, it is only featured on the Japanese frigate Chikugo.

As submarines are not in War Thunder, the Mark 46 will have to be used against surface ships, which with its pathetic explosive mass of 44.5 kg means it will only be effective on boats or sub-chasers. Because it cannot destroy most ships in a single hit, it should be used in conjunction with gun fire to destroy ships. You can soften up targets first by setting them on fire and disabling weapons, before launching a few torpedoes to finish it off, or use it to disable a ship's engines first, and then dissect it with the main battery.