In 1917, the United States joined World War I. At this point in time, the tank had only just been developed by Britain and was first used in the battle of the Somme in 1916. They first achieved success at the Battle of Cambrai in 1917, again under British service. General John J. Pershing, commander of the American Expeditionary Force, saw the potential of the tank and wanted the creation of an American tank corps. The first tank to see service with the United States was the Renault FT, a French light tank. The first mass-produced tank in America was the M1917, which was basically a copy of the Renault FT. The M1917 was finally ready by the end of 1918, but it was too late to take part in the war. By the end of 1918, the Tank Corps had built its ranks up to 20,000 men.[1]

After World War 1 ended, the Tank Corps was shrunk to only 300 men.[1] Only a few tanks, the M1 and M2 light tanks and the M2 medium tank, entered production between the World Wars. The M2 light tank was developed into the M2A4 in 1939, which had increased armament and armour. Very few of these tanks were produced.

When World War II broke out in Europe, the tanks in the US arsenal were outdated and had been surpassed by German designs. The old designs were unable to compete with contemporary tanks, so the M2 light tank was replaced by the M3 light tank. The M3, known as the Stuart, was basically an upgraded M2 light tank, with superior armour and firepower. In turn, the M3 Stuart was upgraded. The most progressive upgrade became known as the M5 Stuart. It had a completely redesigned hull with sloped armour and a modified turret. Through the Lend-Lease Act, the M3 was sent to Britain, who used it in the North African Campaign. It proved to not have an adequate armament to deal with German tanks, so the M3 and M5 saw limited use in Europe and Africa, mostly in the reconnaissance role. Many Stuarts were sent to the Pacific Theater, where there were very few enemy tanks to deal with. In 1941, the British military requested a light tank, capable of being transported by air. The M22 Locust was subsequently designed and shipped to Britain. They saw very little combat as they were deemed inadequate, for the same reasons as the M3/M5 Stuart. In order to replace the Stuarts, the M24 Chaffee was developed. The Chaffee had a dramatic increase in firepower and mobility when compared to the Stuart.

As the M2 medium tank was unable to compete with German panzers, a new medium tank design was necessary. The result was the M3 Lee/Grant. Thousands of M3s were provided to Britain via the Lend-Lease Act. These first saw service in North Africa and were liked because they were able to compete with contemporary German tanks. But, they had many shortcomings, and so, needed a replacement. This replacement became one of the most famous and well-known tanks of the war, the M4 Sherman. It had numerous differences and improvements from the M3. One of the greatest advantages of the M4 was that it was versatile, and also that it was able to be easily modified and upgraded. Later upgrades had improved engines, armour, firepower, and many other improvements. One other advantage of the M4 is that it was able to be mass-produced quite easily, with over 50,000 made during the war.[1] Although the Sherman proved to be an effective tank, it was still underpowered when compared to late war German tanks such as Tigers and Panthers. In order to better combat these German tanks, the M26 Pershing was developed. It was a large improvement over the Sherman. It had superior armour and firepower, allowing it to take on late war German tanks at near-even ground. Unfortunately, introduced in 1945 late into the war, the Pershing saw little combat.

The American tank destroyer force was created during World War II. One of the first designs was the M10 GMC, sometimes referred to as the Wolverine. It used a modified Sherman chassis, but had a completely new turret and was up-gunned, compared to the Sherman. The M10 was decided to be insufficient against late war German tanks and was later replaced. The M18 Hellcat was another tank destroyer design that supplemented the M10. It was lighter and more mobile than the M10 but had very little armour whatsoever. It was designed to use mobility and firepower to avoid enemy fire and outmanoeuvre the enemy. The M18 was used to great effect against enemy tanks, but the gun struggled against the front of late war German tanks. Because the M10 was insufficient against the German tanks it faced, it was mostly replaced during the war by the M36 Jackson. The M36 was also based on the Sherman chassis, but had a new turret, with a more powerful gun mounted. The M36 could knock out most German tanks at very long range and was used very effectively during the war.

The M24 Chaffee was outdated by the time of the Cold War, prompting the creation of a new light tank. This light tank would be called the M41 Walker-Bulldog, which proved to be a much better reconnaissance vehicle than the Chaffee. Another light tank was developed for the requirement of an amphibious light tank. This project was the M551 Sheridan, which notably utilized ATGMs instead of conventional rounds. The Sheridan was perfect for an infantry support role but was very vulnerable, so it was soon retired. It was the last American light tank in production. 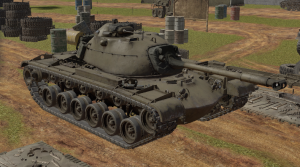 During the Korean War, Shermans and Pershings were still in service, but tank battles became increasingly more rare as the Korean tanks were knocked out. As such, tanks were used more and more for infantry support operations, and the Sherman and Pershing were both seen as inadequate for such operations. The Pershing was soon replaced with the M46 Patton had numerous advantages over the Pershing. The next tank made was the M47 Patton. It did not see combat under US command but was widely exported to US allies. The M48 Patton was the next, and last, Patton tank, which was a huge redesign of the previous Pattons. The M48 was used in the Vietnam War and was also exported, mostly to South Vietnam. After the M48, medium tanks were replaced with main battle tanks (MBTs) in US service.

Perhaps the only true heavy tank to serve in the American military was the M103. It was designed for the Army, but it was only accepted by the Marine Corps. They were retired when the Main Battle Tank began to replace other tank classes.

In 1961, the M60 was designed, the first main battle tank (MBT) of the US military. The main battle tank replaced the other classes of tanks, medium tanks, light tanks, etc. The main battle tank was designed to have strong armour, but low weight, a powerful armament, and good mobility. Towards the end of the Cold War, in the '90s, the M60 was replaced by the M1 Abrams. The M1 Abrams was, and still is, one of the most advanced and powerful MBTs in the world. It has strong armour, good mobility, good firepower, and has been proven in combat during the Gulf War, the invasion of Iraq, and fighting insurgents in Iraq and Afghanistan. The Abrams continues to be upgraded and used by the US military. During the cold war, the IPM1 and M1A1 variants were created.

After the Cold War, another variant of the M1 Abrams was produced, the M1A2, which had extensive upgrades in regards to the M1A1. After The M1A2 Abrams has been upgraded extensively in order to keep the fleet modernized. There has been multiple System Enhancement Package (SEP) upgrades. There was the SEPv1, and SEPv2 upgrades, which both added significant modifications to the vehicle[2]. Recently, the M1A2 SEPv3, which has been renamed the M1A2C, entered service. The first was delivered in 2017. This is the most modern version of the Abrams in service. Work on another upgrade, the M1A2 SEPv4, or M1A2D, has begun. This upgrade is still being developed. Delivery is planned to begin in 2021[3]. One thing to note is that a package can be installed and removed on any of these variants called TUSK (Tank Urban Survival Kit). TUSK is additional protection, added in-theatre for additional protection. It was specifically designed to protect the tank from unconventional threats in urban combat, where tanks are most vulnerable. TUSK includes ERA, a remote weapons station, and other upgrades. There is a slightly improved version of TUSK called TUSK II[4].