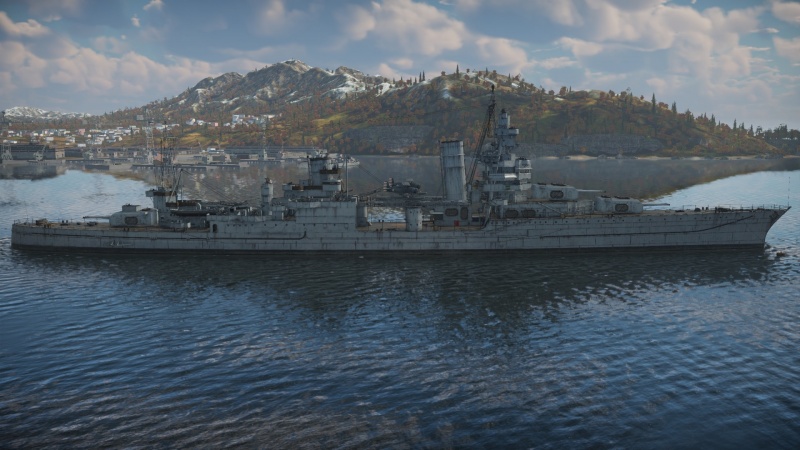 USS Portland's survivability is rather mediocre for an American heavy cruiser, and rather weak compared to the enemies it often faces in battle. Portland has a main armour belt of just 57.15 mm of RHA, which can be easily penetrated by SAP and AP shells above 127 mm calibre. The magazines are protected by 146 mm of armour and sit below the waterline, meaning that they are relatively survivable. However, Portland's ready-use shell rooms are directly below the turrets and thinly-protected, meaning that they can be detonated by enemy shells and cause severe damage. Its main turrets have only 63 mm of armour on the front and even less on the sides, while its secondary armament is exposed and prone to shrapnel damage. All of these factors combined make for a vessel that can be quickly disabled and ravaged by lower caliber fast reloading cannons (Atlantas, Clevelands, and Brooklyns in particular are especially dangerous to the Portland), and it must be played cautiously. Portland has a crew of 1,033 crew members, which is about average for a cruiser; the ship's four engines are placed symmetrically in groups of two, meaning that a well-placed shot can knock out at least two engines.

USS Portland, as a cruiser, reaches a top speed of 32.4 kn. This is similar to most other United States Navy heavy cruisers, being fractionally slower than the later USS Pittsburgh for example. This speed will allow captains of Portland to keep pace or slightly surpass other nation's cruisers, though it will be outpaced by light cruisers and destroyers. This speed allows the Portland to take objectives, though it may not be recommended to close the distance, instead using the floatplanes to capture and keeping range from enemy vessels. Portland's rudder takes approximately 3 seconds to respond at flank speed, and the speed falls to 23 kn while in a sustained turn. Portland takes approximately 40 seconds to accelerate to flank speed, and 1 minute to come to a halt. Captains should be aware that USS Portland has a wide turning circle, and should give any obstructions a wide berth, as she will be unable to quickly respond to avoid collisions.

The Portland carries a main armament of nine 8"/55 Mk.9 guns in three triple turrets, two fore and one aft. These guns are the standard armament for American heavy cruisers, and pack an impressive punch. The guns have good ballistics, and can access four shell types: Mk.14 Common, Mk.19 APCBC, Mk.25 HC and Mk.17 SP Common. Of these shells, the Mk.17 Special Common shell is most effective against cruisers, as it has a great explosive mass and enough penetration for most cruiser main armour belts. The Mk.19 APCBC shell can be used against heavily-armoured targets, but has a relatively small explosive mass of 1.65 kg. Finally, the HC shell, with almost 10 kg of explosive filler, is highly effective against destroyers and unarmoured vessels. The exception is when facing against American destroyers such as the USS Moffett, in which case their extensive anti-fragmentation armour makes them extremely (some would say unreasonably) resilient to HE nose-fused shells. When facing them it is best to use the Special Common shells to try and deal internal damage.

USS Portland mounts a secondary battery consisting of 8 x single mount 5-inch/25 Mk.13 anti-aircraft guns. These are mounted 4 port and 4 starboard amidships, slightly behind the second funnel. These cannons were, unlike the 5-inch/38, purpose-built for anti-aircraft duty. Therefore they have access to just two shell types - Mk.36 AAC (HE-TF) and Mk.28 AAC (HE-VT), with no anti-surface rounds. The former is a time-fuse shell (meaning that the fuse is set by the crew before the weapon is fired, higher crew skills greatly help with the accuracy of the fusing), while the latter is a proximity fuse shell that explodes automatically within a 23 m radius around aircraft. Both shells are ineffective against armoured targets, having ~35 and ~36 mm of penetration respectively. However, they can be used against lightly armoured targets such as destroyers and patrol ships, destroying lightly armoured sections of heavier ships such as AA mounts and the superstructure, and of course the aircraft they were designed for. The HE-VT is the recommended shell, as it is both more reliable at downing planes and has more filler; this of course does more damage, both to enemy air and surface targets.

The guns themselves are relatively good at short-range defence, being capable of firing at 20 rounds per minute (3-second reload). As well, they have very good vertical and horizontal firing angles. The guns, as a 25 calibre weapon, have a lower velocity than the 38 calibre, with a velocity of 657 m/s, which may take some adjusting to.

Due to the lacklustre protection for the secondary battery, captains are advised to avoid repairing them until they are needed for defense, to avoid crew being drained considerably.

Firstly, Portland's main battery is quite mediocre. The nine 203 mm guns, placed in triple turrets, have an extremely weak reload speed of 17.1 seconds with a completely spaded crew, and 20+ seconds with a stock crew. This reload speed is uncompetitive against most other cruisers at the Portland's BR, and severely limits the ship's damage potential. Furthermore, Portland's guns are inaccurate - and that is, very inaccurate. These weapons have a lot of trouble hitting things reliably beyond ranges of 8 kilometres, making the ship hard to play at longer ranges. These constraints mean that Portland does a lot better at closer ranges, where its main battery can hit targets reliably.

Secondly, Portland is not that survivable. Though it does have a relatively large crew size for a heavy cruiser, Portland lacks heavy armour, especially on its citadel, which houses the massive engine block. The ship also has little protection on its first stage shell rooms, subpar protection for its main armament, and exposed secondaries, all of which result in a vessel that can be rapidly crippled by even concentrated destroyer fire. Because of these constraints, you should try to use ground cover as much as possible to preserve survivability. In maps such as South Kvarken, with plenty of island covers, stay behind islands wherever possible. In open maps such as the conquest maps, your only hope will be to stay behind the front lines, and hope that enemies don't target you.

Finally, note that Portland does not have great anti-aircraft defence. While the ship does get access to several 28 mm "Chicago Piano" and 20 mm Oerlikon anti-aircraft gun mounts, these weapons lack range and power, limiting their effectiveness to ranges of less than 2.5 kilometres. Indeed, the ship does carry eight 127 mm Mk 25 guns, capable of firing AA-VT (proximity fuse) ammunition, but these weapons are not capable of firing fast enough to be able to destroy faster incoming aircraft. Because of this, you should try to stay with allied ships, particularly ships with great anti-aircraft protection. This will help ensure that your ship will stay safe from enemy aircraft.

The Portland-class cruisers were the third heavy cruiser design that the Americans produced in the interwar years, following the Northampton-class. There were only two ships in this class, the USS Portland (CA-33) and the USS Indianapolis (CA-35). Interestingly the Portland-class was originally planned to be a light cruiser design, being re-designated as heavy cruisers only after the hulls had been laid down in 1931.