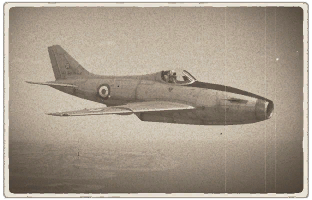 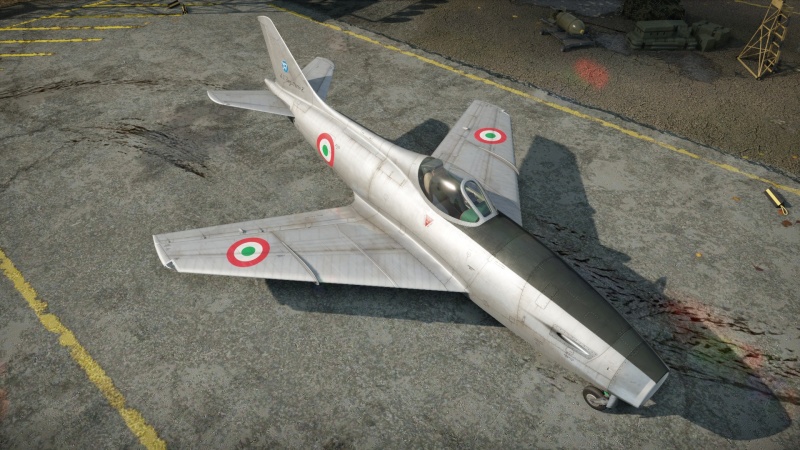 The Sagittario 2 has great manoeuvrability, at its battle rating and even above it, there won't be many aircraft that can match your speed, rate of climb, or first turn response time. Whilst playing the Sagittario 2, you are able to do amazing manoeuvres that the enemy team could only dream of doing. Due to this, an experienced player in this aircraft can become quite a dangerous opponent. The max altitude of the Sagittario 2 is 11,000 metres, thanks to its rate of climb, you should be able to reach a good altitude at the beginning of the match with minimal effort required. One other great thing is how easily you can pull Gs with it, use it to your advantage and you should rack up quite a few eliminations.

The Sagittario 2 is armed with:

Using the Sagittario 2 is quite straightforward, it's an aircraft that nearly anyone can pick up and do fairly well in. This is mainly due to its amazing flight performance, which when compared with the majority of aircraft it'll face at the battle rating, make this vehicle quite fun to use. The best way to play the Sagittario 2 is to climb to an average altitude of around 3,500-4,000 metres at a 10° angle to make sure that you have some spare speed, and engage with any somewhat isolated enemy you can encounter. This is highly effective mainly due to the powerful 30 mm HS 825 cannons that the Sagittario has access to. This plane is really good dog-fighter so you are able to perform quite a lot of manoeuvres that many aircraft are not able to pull off. Make sure you consider that during engagements, especially because the aircraft can easily pull G's without too much punishment towards the player controlling it. However, you should be careful to not get caught in a furball or doing sustained turns as your plane bleeds a higher amount of speed during turns than your enemies, However if you have a pack of enemies behind you, and you're flying at a good speed (650 kph or more), you can pull hard to evade all of them and try to fight back. Keep in mind, if you want to take advantage of its speed and manoeuvrability, you will have to keep the aircraft as light as possible, meaning bringing the minimal amount of fuel. This to some may seem like a disadvantage, but it's likely the most effective way to get eliminations with the vehicle as it allows the aircraft to remain fast and nimble. Do keep in mind that if you decide not to bring a lot of fuel, you won't be in the battle as long, so make sure to make every second count.

Another thing that people may claim is a disadvantage is the low ammo count; although this is somewhat true, doesn't mean the vehicle suffers. The HS 825 cannons are extremely deadly, they have a very high muzzle velocity, which paired up with the hard hitting 30 mm cannons, means that the majority of enemy aircraft you'll face will be destroyed after a small barrage of your main weapon. The Sagittario 2 can also work at low altitude as an AI ground pounder, the main cannons it has access to are just as effective at taking out ground AI targets as they are at taking down air targets. This can be very effective as you can easily take advantage of your speed at the beginning of the match to slip past undetected by enemy aircraft. You could also use this to surprise enemies by flanking them once they've flown past you, unaware that you're actually able to go behind them.

The Sagittario 2 does not have access to any countermeasures so keep that in mind if you choose to bring it in ground RB. Its cannons are enough to easily make make short work for the majority of lightly armoured ground vehicles, such as IFVs and SPAAs. Considering it doesn't have any payload options such as rockets or bombs, you'll have to entirely rely on your main cannons, and that also goes for air vehicles, as you don't have access to air-to-air missiles. It is not recommended to land on short runways, it should be avoided or risk crashing at the end. This also applies for Arcade battles. Overall in the Sagittario 2, try at all times to take advantage of your abilities, as its the best way to come on top in duels, and win the match.

The story of the Sagittario 2 began roughly around the 1950's, during the cold war. The aircraft would be designed by Sergio Stefanutti, who was one of the most original and innovative Italian aeronautical designers. In fact in 1939 he produced the S.S.4 that was the first fighter in the world to fly with canard lifting surfaces and forward landing gear.

During the Second World War he was involved in the construction of the "Light fighter", fast and well-armed, which was able to compete with those in its class, equal in weight, dimensions and even greater in power, which couldn't be mass-produced because of the unfavorable conclusion of the conflict. His work as a designer also continued into the 1940s and 1950s, when, despite the destruction of the war, the Italian aviation industry was still showing its strength, proposing numerous new types of aircraft for both the internal and international market.

Eventually, he'd come up with The Aerfer "Sagittario II" (Sagittarius II), the light jet fighter with arrow wings. It was the first Italian supersonic jet fighter, designed and produced at the beginning of the 1950s by Sergio Stefanutti and was a logical development on the light fighters previously built for SAI Ambrosini. The Sagittario 2 was actually a development of previous Stefanutti designs, originally based of a pre-war piston-engine aircraft meant for racing.

Eventually, after a few shortcomings which included some issues with the jet engine, the Sagittario was born. There were a lot of advancements made during the development of the Sagittario, but sadly whilst conducting tests, it was quickly learned about certain defects of the aircraft, one of them being discovered after landing.

To keep it simple, when the aircraft utiliste its breaks to stop. The weight of the engine placed in the bow gave the aircraft a tendency to rotate with the nose low down, making impact with the ground and an ensuing somersault of the aircraft a possible and dangerous outcome. 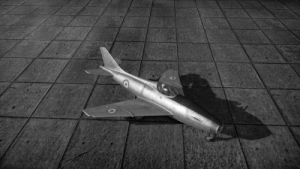 Sagittario 2 during tests on airfield

At the beginning of 1953, while the prototype of the "Sagittario", obtained by modifying the SAI S.7, was still being subjected to flying tests and was giving its first positive results, the "Sagittario II" was created on the drawing boards of SAI Ambrosini. The main difference between the Sagittario 2 and the previous Sagittario 1 would be the fact that the new aircraft would be built entirely with metal and propelled by a jet engine with a much greater thrust. The Sagittario 2's engine would be a Rolls-Royce Derwent 9, which allowed the Sagittario 2 to reach speeds of over 1000km an hour.

As mentioned previously it was the first Italian supersonic jet Italy would have produced. In September 1953, while the planning continued, the Aeronautica Militare Italiana (Italian Air force), which financed the work on the aircraft making use of the funds made available by the United States, under the aegis of the M.D.A.P. programs of mutual assistance to the NATO countries, decided that its construction, more complex than that of the previous Sagittario I, would be entrusted to the Neapolitan Company Aerfer. Aerfer had been previously known for in the aeronautical field by making some parts for the Republic F-84 G "Thunderjet" jet fighter-bombers. In addition, they offered maintenance for certain US made aircraft stationed in Europe. 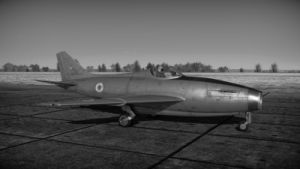 After a lot of discussion, eventually an agreement was would be made between the SAI Ambrosini and Aerfer for the transfer of the preliminary project and the rights to produce Stefanutti's new light fighter under licence, so that it would be given the new complete name Aerfer-Ambrosini S. "Sagittario II". The Italian air-force would order a total of 2 prototypes, and would make them undergo a series of intense tests. Part of the tests would focus on the armament, speaking of which, the Sagittario 2 was armed with a Hispano-Suiza 825 cannon.

It would hold up to 120 rounds per cannon, they fired bullets that were 113mm long and 30mm in diameter. The bullets had a total weight of 360 grams. The reason the cannons would actually be as powerful as they were was due to the ammunition being 40% larger than the bullets of the same caliber used by the other small Western cannons then in production. As an example, the French DEFA used a 275 gram bullet, and the British Aden used 220 gram bullet.

That paired up with its amazing muzzle velocity would guarantee a very hard-hitting weapon, which rest assured, would be able to completely destroy a lot of aircraft with just a short burst. Overall, the Sagittario 2 would be a very promising vehicle, it didn't get picked up by the Italian air force, but was was learnt from the Sagittario 2 would be later re-used on a later project by Aerfer, called the Aerfer Ariete, a modified Sagittario 2 with a more powerful engine.

In the early 1950's, Italian aircraft designers began work on developing a jet aircraft on the basis of a successful pre-war piston-engine race plane, initially with the goal of constructing a pure technology demonstrator. This aircraft - named Sagittario - took to the skies in January 1953, displaying promising performance.

Convinced of the aircraft's potential, the aircraft designers continued work and developed the design further into the Sagittario 2. The new aircraft featured an improved design, a significantly more powerful jet engine and comparably heavy armament for an aircraft of its time. Two prototypes of the Sagittario 2 were built and test flown in 1956.

However, despite its state-of-the-art design and excellent performance, the Sagittario 2 faced many problems during development as its manufacturer - Aerfer - struggled to allocate enough resources into its development. As a result, the aircraft had a drawn out development period which meant that newer aircraft were entering service while the Sagittario 2 was still being tested. Because of this, the Sagittario 2 would fail to enter production as the procurement of the more promising Fiat G.91 was right around the corner.

While not getting past prototype stage, the Sagittario 2 would serve as a basis for the subsequent development of another jet fighter prototype.