Difference between revisions of "HMS Dido" 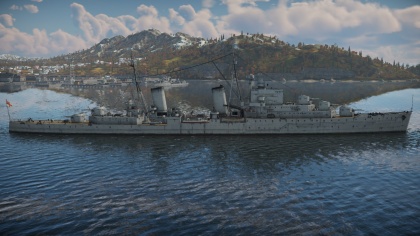 Dido-class light cruiser were designed in the 1930s as convoy escorts and destroyer leaders, intended for operations in the Mediterranean. As such, ships of the Dido-class had to be both large enough to operate in rough waters as well as fast and maneuverable enough in order to keep up with destroyers, whilst at the same time remaining relatively cheap to produce in large numbers.

By 1944, HMS Dido briefly returned to Great Britain, before being sent off on escort duties as part of the arctic convoys. In 1945, HMS Dido was sent to Copenhagen, where the warship fired the last naval shot as part of the war in Europe, however not in anger, but in celebration of the surrender of the German Kriegsmarine.

Some time after the end of WW2, HMS Dido joined the ranks of the Royal Navy reserve fleet, remaining in service for another good decade. In 1957 however, HMS Dido was decommissioned from service and sold for scrap.