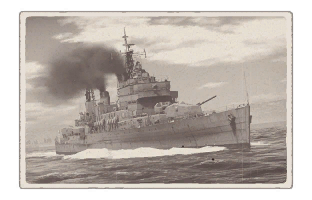 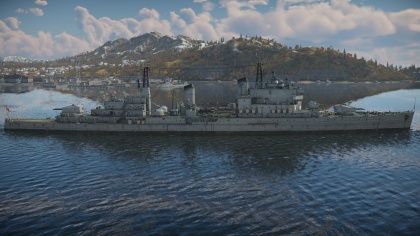 The HMS Tiger C20, 1960 is a gift rank IV British light cruiser with a battle rating of 5.7 (AB/RB/SB). It was introduced in Update 1.87 "Locked On" as a reward for the "Battlefield Engineer" event.

Overall, HMS Tiger has adequate, but not impenetrable, protection with large areas vulnerable in a close-range engagement. The armour on HMS Tiger follows an all-or-nothing scheme with only the critical areas of the ship protected. The belt consists of a main 89 mm RHA section that extends across most of the ship's length, protecting just above and just below the waterline. There is also the second section of 51 mm RHA that extends above the main belt to provide additional protection to the engine compartment. The main guns are lightly armoured, ranging from 55 mm RHA on the front turret face to 20 mm RHA on the turret sides. The strongest armour on HMS Tiger is the 50 mm RHA deck armour that covers the entire length of the ship. Unlike the majority of its tech tree equivalents, this armour is situated on the weather deck, effectively protecting not just the engines rooms but all systems below the bridge and turrets. This provides effective protection against plunging fire from all guns smaller than cruiser calibre.

The bridge and radio room sit exposed in the superstructure opposed to below deck or within an armoured conning tower. This makes them extremely vulnerable to any form of gunfire, not just cruiser calibre shells.

Survivability on the HMS Tiger is lower than a lot of cruisers of the same size. This can be attributed to her overall low number of guns combined with her exposed main battery magazines. As the main armament consists of only two turrets, a couple of shells from a high calibre gun can entirely knock out her main guns, removing her ability to retaliate. The secondary guns don't fare much better as they are also low in number and easy to damage. The biggest boon to her survivability is her crew count of 880, meaning any shells that don't cause damage to a critical system will have minimal effect on the performance of the ship.

The main armament consists of four 6 inch/50 QF Mark N5 guns mounted in two turrets, one forward and one aft. These guns are able to fire 6-inch HE stock and 6-inch AP as a Tier 1 modification.

The main armament's strength comes not from the weight of their broadside, as it only consists of four shells, but from their reload speed. The main calibre reload varies from 3s to 3.9s depending on crew skills, giving HMS Tiger by far the quickest reload of a gun this size. Her quick reload allows her to rapidly switch ammunition types to best suit the current situation. It also means her overall shells per minute is comparable to other cruisers, even with her low barrel count.

The mounting for these guns is also very versatile due to their quick turn rate of 17° per second and wide firing angles of ±150°. This allows her to quickly react to changes in the engagement, taking under 18 seconds to fully rotate her turrets and only 10.5 seconds to turn them 180°. These wide firing angles also mean she can show minimal broadside to get all her main guns engaged, reducing the chance of an enemy shell penetrating her belt.

Because these guns are the dual purpose, they fire at anything and everything within range, micromanagement of priorities by the captain can greatly increase their effectiveness.

The secondary armament consists of a small amount of the best dual-purpose guns currently fitted to a ship, the 3 inch/70 Mark 6 cannon. This cannon is mounted in three twin mounts in various positions across the ship (one front and one on either side of the superstructure), proving good all round firing arcs with minimal blind spots. These turrets only fire one type of ammunition, the 3 inch NC101 HE-VT radio fused shell.

These guns effectiveness is minimal against other cruisers due to them only being able to fire high explosive. However, this round is highly effective at destroying smaller, less armoured ships, even ships as large as destroyers are quickly dealt with. The guns main strength against other surface vessels lies in their extremely quick reload, between 0.35s and 0.57s depending on crew training. This means that a literal rain of high explosive rains down on any ship within their targeting range, doing low but rapid damage to any unarmoured section.

The secondary armament is best left to be aimed by the AI gunners in most situations due to the high levels of lead required to hit any target at a decent range.

These guns really shine in the anti-aircraft role as they are able to throw up a large wall of accurate, high damage flak. This is due to their excellent fire rate and arcs of fire. These guns are not a perfect shield against air attack however as they struggle to lead the target correctly until the aircraft is within 3 km, a dangerously short distance to dodge a torpedo attack.

The wide firing arcs of these guns leave most approaches to the ship covered by at least two turrets, with particularly high approaches able to be engaged by all three. However, two major blind spots at the rear and front of the ship leave certain attack angles unguarded.

The best use of these anti-aircraft guns requires an active role from the captain, changing the angle of the ship to maintain at least one gun, if not two, on target. Additionally, the guns start firing when an aircraft is at around 8 km from the ship. This is too far out of their effective range to do any damage of not and is simply a waste of precious ammunition. The deactivation of the anti-air armament until the target is within 3 km makes the guns much more deadly.

The three Tiger-class cruisers were initially laid down as Minotaur-class cruisers early on in WW2. However, their construction priority was considered low as British naval warfare at the time centred a lot around anti-submarine warfare - a role which ships of this class weren't intended to fill. Thus, the ships would only be partially completed by the end of WW2, with their design being acknowledged as outdated.

After WW2, the decision was made to complete the ships' construction, but to a different design. Work on completing the new Tiger-class light cruiser began in the early 1950s with the ships seeing completion by the end of the decade. The ships were refitted and modernized extensively, however, they remained outdated designs due to rapid advancements in technology and the changing nature of warfare. As a result, the class was soon afterwards converted into helicopter cruisers and went on to serve with the Royal Navy until the late 1970s. Tiger-class light cruisers were the final British 6-inch gun armed cruisers and the world's last large-calibre artillery ships, no one else has built such ships.