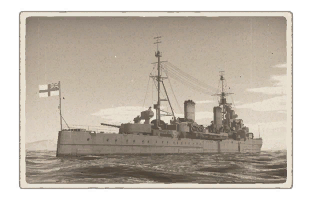 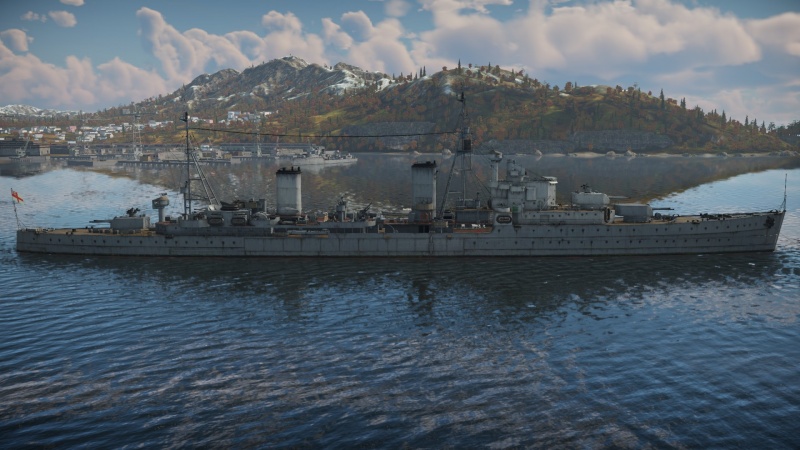 The Arethusa is the lead ship of the Arethusa-class light cruisers. They were designed as 'cut-down' economy versions of the Leander-class light cruisers, allowing more of them to be built on the same tonnage in order to protect the British Empire's vital trade routes. As such, her armament, machinery, and protection are reduced compared to the Leander.

In order to save displacement, the Arethusa's protection is concentrated around vital components. The thickest armour is located around the magazines, which are protected by an armoured 'box' with 76 mm sides below the waterline. This mostly protects the Arethusa from instant destruction due to magazine powder explosions. However, the shell rooms located next to the powder magazines are much less well protected, with only 25 mm protection. If a shell room is hit, it will explode and cause considerable damage to the ship, though the ship will survive if enough crew remains. Both of these are sited behind fuel tanks, thus increasing their protection level somewhat.

The Arethusa, like the Leander, does not have a full length armour belt, but it does have a 57 mm belt protecting the machinery. This is sufficient to withstand most destroyer fire when angled and from medium range (5000 m or beyond). However, it will not reliably protect against light cruiser fire. Deck protection is also quite thin at only 25 mm.

Like almost all British cruisers, the Arethusa has an open unarmoured bridge. This makes it very vulnerable to getting disabled from even nearby HE shell explosions.

Unlike the preceding Enterprise, all of the Arethusa's main armament is protected in fully enclosed turrets with 25 mm all-round armour. This makes them less vulnerable to HE blast and fragmentation from nearby hits, but it is still fairly thin and can be easily penetrated by even destroyer shells.

The Arethusa has a crew complement of 623, which is somewhat above average for a light cruiser at its battle rating, and also more than what the Enterprise gets.

The Arethusa is fairly slow for a light cruiser, especially without upgrades and compared to the preceding Enterprise. Even upgraded, she is still the slowest of the British light cruisers. On the other hand, because of her small size, she has good handling for a light cruiser, and can make fairly tight turns quickly.

The Arethusa's main armament consists of six BL 6-inch Mark XXIII guns mounted in three twin turrets. These have a relatively fast rate-of-fire, at a maximum of 8 rounds/minute, and good accuracy for a heavy cruiser. Unlike the preceding Enterprise, her turrets do not have a first stage ammunition rack, and are thus able to sustain their high rate-of-fire.

The stock HE shell comes with just under 4 kg of TNT equivalent, which is highly effective against destroyers. While this shell will not do too much to cruisers, it can be helpful in starting fires or knocking out crew in exposed weapon positions.

The CPBC semi-armour piercing shell has a powerful explosive filler (1.78 kg of TNT equivalent) and sufficient penetration to get through most light cruisers' belt armor at medium range. These shells are also highly effective against destroyers as the fuse sensitivity is just 7 mm with a delay of 8 m. This means that the shell will fuse on a destroyer's thin plating before exploding inside the ship, inflicting substantial damage damage.

The Arethusa also has access to HE-VT and HE-DF shells for anti-aircraft purposes. Proximity-fused HE-VT is flatly superior to HE-DF because the former is not reliant on accurate range-finding in order to burst near its target, rendering the latter shell mostly pointless. Combined with the fact that the Arethusa can also elevate her main guns up to 60 degrees, this allows her to effectively engage aircraft, especially less agile heavy bombers, with the main armament. The HE-VT can also be used instead of the basic HE shell against surface targets with similar effectiveness.

The Arethusa does not have a proper AP shell, thus the main armament lacks the penetration to threaten heavy cruisers except at close range.

The Arethusa is a general improvement over the Enterprise in all but a few ways. Firstly, the Arethusa features a better main armament. While the number of guns goes down to six, the broadside is up to six thanks to the three dual-gunned superfiring turrets. These guns also have a better rate of fire, firing a shot every 7.5 seconds. This, combined with the Arethusa's good turret traverse, can make this ship a monster at medium-to-close range. Carrying on from the Enterprise, the Arethusa still bolsters a powerful AA screen, but now with better DP guns thanks to the dual-mounted 4-inch guns, with a 3 second reload. These guns can be deadly both to large aircraft and to enemy destroyers and patrol boats, giving the Arethusa more survivability at close range than its predecessor. It also still features the fast torpedoes of the Enterprise, as well as good turning time.

The Arethusa does sacrifice some elements of its design. Firstly, it's a slow ship, doing just 26 knots when stock. It also inherits the poor armour of the Enterprise, with the addition of having even worse deck armour (making this ship vulnerable to bombs and rockets) and weaker belt armour. This, combined with the ship's low crew tally, means it struggles to take on a good amount of damage, especially from other cruisers. This ship can still be played effectively against light cruisers and destroyers, but Arethusa players should be cautious around the armoured light cruisers of Russia and America, as well as heavy cruisers of any design, which can punish the Arethusa's small size and poor armour. 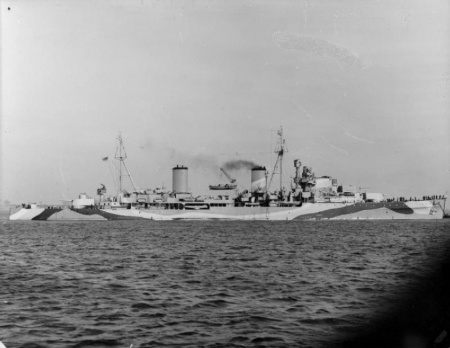 HMS Arethusa was the lead ship of her class, a set of four light cruisers built for the Royal Navy. Designed as a lighter version of the Leander class to counter Merchant-raider ships, they had a smaller displacement and armament but were big enough to serve as fleet cruisers. Commissioned in 1935, Arethusa served in the Mediterranean theatre before the outbreak of war, and later participated in a variety of conflicts including the Norwegian campaign and Mediterranean campaign. Struck by a torpedo in late 1942, she was inoperational until late 1943 and didn’t see active service until the D-Day landings in June of 1944. She had the honour of ferrying King George VI over the English channel to inspect the Allied forces in Normandy, but was later damaged by a naval mine and put out of service for the rest of the war. She was used for weapons trials until 1949, and subsequently scrapped.

In the 1930s, there was serious concern over the potency of armed merchant raiders (merchant ships retrofitted with heavy armament), and as a result, the Royal Navy ordered a new class of vessels to counter these ships. The new vessel featured a toned-down version of Leander’s hull, with less armament. Even so, they were able to outgun (and possibly outrun) merchant cruisers by a fair margin. The Arethusa herself displaced just 5220 tons standard, and was capable of making 32 knots (59 km/h).

The Arethusa was armed with six 6-inch (152 mm) BL Mk 23 guns in three dual turrets - two fore (in the A and B positions) and one aft (in the Y position). Her secondary armament was composed of four single 4-inch (102 mm) guns, though this was replaced in a later refit. Her anti-aircraft armament was initially scarce, but was improved over time. She carried two triple 533 mm torpedo tubes in beam positions.

After her commissioning, the Arethusa was assigned to the British Mediterranean squadron, and remained there at the start of the Second World War. She was then recalled to the British Home Fleet, and subsequently served in the Norwegian campaign. In June of 1940, she joined Force H at Gibraltar, and participated in the attack on French Forces based at Mers-el-Kebir. She later participated in the Hunt for Bismarck, and was later employed on convoy escort duties in the Mediterranean.

In November of 1942, Arethusa was struck by an Italian torpedo that caused severe damage; after temporary repairs, she was sent to the Charleston dockyard in the US and remained there until late 1943. During this time, her anti-aircraft armament was improved significantly, and she was fitted with new dual 4-inch mountings. After her return to service, she participated in the D-Day landings and provided fire support for the forces landing at Sword Beach. She was also given the honor of carrying King George VI across the English Channel to inspect allied forces in the Normandy region. However, she was hit by a mine several days later and sent back to the shipyards for repair. Arethusa saw little service for the rest of the war, and was placed into reserve in November of 1945. There were plans to sell her to the Netherlands navy, but these plans failed to come through and Arethusa was eventually scrapped by 1950.

The development of the Arethusa-class light cruisers began because their predecessors - type Leander ships, were not very suitable for fleet operations at sea nor as a lead destroyer. Type Leander cruisers didn't have the maneuverability to be leaders, nor did they meet the minimum silhouette requirements for night operations. British engineers had to create a new, lighter, and more maneuverable ship based on the Leander.

The result of this endeavour was the creation of the Arethusa-class in the early 1930s - a light cruiser design based on the Leander-class, with reductions in firepower, protection and other aspects to accomodate for weight savings. The design was soon approved for construction, with six ships being initially ordered, although five were actually built in the end.

HMS Arethusa, the lead ship of her class, was laid down in January 1933, being commissioned in May 1935. Upon her completion, HMS Arethusa was immediately assigned to the Mediterranean, where she would also witness the outbreak of WWII in September 1939. Early in the war, HMS Arethusa operated off the coast of Norway, assisted in the evacuation of troops from France in 1940 and protected numerous Allied convoys in the Atlantic and Mediterranean.

Later in the war, in 1942, HMS Arethusa suffered heavy damages as a result of an airborne torpedo attack by axis forces, knocking the ship out of action for almost 2 years before finally being repaired in the US. Arethusa's final major operation of WWII were the Allied landings in Normandy in 1944. HMS Arethusa was put in reserve in the immediate postwar years and was later scrapped in May 1950.