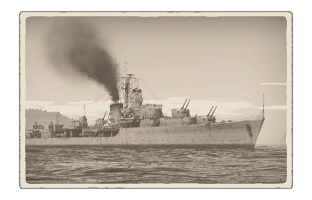 The Battle class, HMS Armada (D14) is a rank III British destroyer with a battle rating of 4.3 (AB/RB/SB). It was introduced in Update 1.83 "Masters of the Sea" as part of the British fleet closed beta test.

The Battle is a fast destroyer with decent durability and powerful forward-firing armament. Use these features to press against the enemy: keep your ship pointed straight and close the distance between you and your opponents while constantly firing back and keeping the pressure on. While the 4.5-inch guns can lack huge damage, the sustained rate of fire is insanely good, and they're very accurate. Don't show your broadside if you can help it, as it opens up to receive more potential damage and only allows you to bring a single other gun on target, which is not worth the risk. The Battle also has a good AA and auxiliary armament with its host of 40 mm guns, so don't be frightened of aircraft and patrol boats, as they won't pose a threat.

The Battle is not invincible, and will take huge damage if you show your broadside to the enemy. The torpedoes are good, but the torpedo tubes are slow to traverse and have a poor firing arc. Do not turn your ship to launch torpedoes. It makes you an easier kill and isn't worth it. Only use the torpedoes when an enemy is already in front of them, or if you know you won't receive any counter-battery attacks.

Realizing the heavy losses to air attacks and the inability of the then current destroyer designs to deal with aerial threats, the Royal Navy decided to act. In 1941, the first plans for what would become the replacement for the Tribal-class were drawn up.

Contrary to previous classes, the new destroyers would focus on powerful AA armament, featuring large calibre, high-angle dual purpose guns assisted by a number of smaller calibre AA cannons. The proposed design was accepted in autumn of 1941 under the name "Battle-class" with initial plans to build a total of 16 ships, forming two flotillas. The first order for 10 ships was issued in April 1942, with the second order for the remaining six ships following in August.

Despite the orders already being placed, further debate among high-ranking officials about the final design of the ship continued. As the initial ships were already under construction, changes to the existing design couldn't be applied anymore. This led to several more subclasses being developed, but that's a story for another time.

Although the first ships were launched by November 1943, delays in their completion were caused by late deliveries of critical fire control systems. In the end, only a handful of ships were completed by the end of WW2 and none of them saw any combat action. However, most of the ships of the Battle-class continued to serve well into the Cold War.

HMS Armada was one of these early ships of the class to be completed, but due to similar reasons, was only commissioned into service in July 1945. After several port visits throughout the UK, she was placed in reserve in 1947 only to rejoin active service in 1949 as part of the 3rd Destroyer Flotilla, operating in the Mediterranean.

During the mid 1950s, HMS Armada was involved in the Suez Crisis, but rejoined the Home Fleet shortly after. In 1960, HMS Armada was decommissioned and five years later, in 1965, taken apart for scrap.