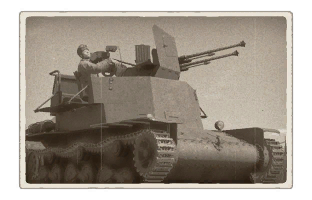 The So-Ki is a rank III Japanese self-propelled anti-aircraft gun with a battle rating of 3.3 (AB/RB/SB). It was introduced along with the initial Japanese Ground Forces tree in Update 1.65 "Way of the Samurai". The So-Ki is quite fast, being built off of the Type 98 Ke-Ni, so use this blistering speed to your advantage. You can be a scout and shoot enemies so they appear on your map - but only do this if you have a clear way to escape and aren't in danger of being sniped by an enemy sitting on a hill 700 meters away.

Double the guns means double the difficulty enemy aircraft will have with dealing with you, so be sure to aim for engines and at the centre of planes - your exposed cabin means that planes will often try to dive on you, hoping to score an easy knockout - give them a nasty surprise by filling their engines with Type 100 HE-T shells. That being said, always, always, always pay attention to what's going on in the air. Your gunner gets knocked out quickly, so be sure to always be aware of the battle in the air, as well as on the ground.