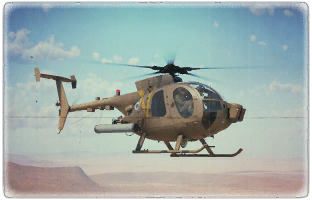 The MD500-TOW Lahatut is a rank V Israeli attack helicopter with a battle rating of 8.7 (AB/RB/SB). It was introduced in Update "Danger Zone".

The MD500-TOW can be outfitted with the following ordnance:

In 1975 the Israeli Air Force received its first batch of 6 American Bell AH-1G Cobra strike helicopters, previously used in Vietnam. Israeli pilots enthusiastically began to master a new type of military aircraft and nicknamed the American helicopters Tzefa - "Palestine viper" - after the largest poisonous snake in the region. A little later, the AH-1G was replaced by the AH-1S equipped with anti-tank missiles, and the Hughes MD500 TOW light helicopters, also equipped with ATGMs to destroy armored vehicles. Israeli attack helicopters received a baptism of fire in 1979 where they were widely used in battle in the First Lebanon War, showing a high combat efficiency. The last helicopters of the AH-1 series were retired from service in 2013.