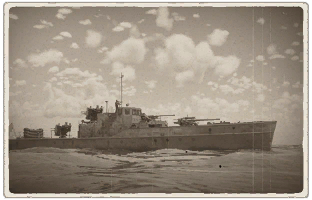 The Krischan der Große is a slow boat. The 88 mm HE round can knock out small motorboats wit a single shot and the dual 20 mm quad mounts provide plenty of firepower to the rear and broadsides. As it is a wooden boat, taking fire from anything bigger than .50 cal MGs will make short work of the crew, therefore captains must be cautious. Closing with the enemy is never a good idea. Instead, use the cover of islands and take advantage of friendlies drawing fire. This can allow you to get some quick kills with the 88 mm gun. One of the worst enemies for the Krischan are the light AA barges. They can rain fire down from 2 km with their 20 mm cannons arcing fire over islands and other obstacles, absolutely shredding your crew. The boat handles fine in still water but targeting guns in heavy swells can be a challenge as the boat severely rocks in even moderate seas.

As part of the ongoing planning efforts for Operation Sea Lion - the German invasion of Great Britain - the Reich Air Ministry ordered the construction of a prototype anti-aircraft boat in 1940. Envisioned as a compact and simple vessel, the design was to provide cover for landing troops during the invasion as well as protect the coastal areas of the Netherlands and France from low flying aircraft. Hastily developed, the vessel was laid down in Autumn 1940 in Rotterdam, receiving the name "Flusi 1" and subsequently entering service in November 1942.

Soon after commissioning however, the drawbacks of its poorly thought out design became apparent. Namely, the vessel’s anti-air weapons weren’t fit for use in rough waters due to a lack of stabilization and its aircraft petrol engines were unable to moor at low speeds. As a result, the design was generally disliked and no mass-production order was issued, despite original plans for constructing around 100 units.

Despite continuing service throughout the war, Flusi 1 never took part in any active combat operations. The vessel was later on sunk during an Allied air raid west of Amsterdam in February 1944, ending its brief service career.