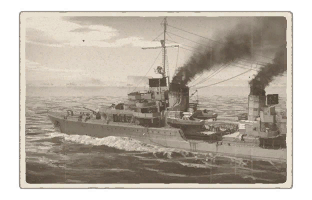 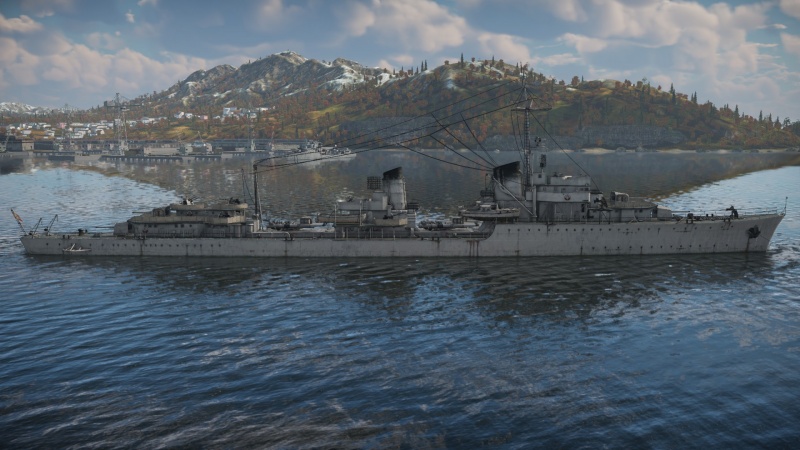 Similar to other destroyers at its rank, the Type 1934A (1944) has very little armour to shield itself from incoming fire except from small-calibre machine guns. However, the ship is quite survivable thanks to its 8-section hull and high crew count. This allows the Type 1934A (1944) to last longer in a trading firefight.

The Type 1934A (1944) is fast and manoeuvrable, which can help the ship to survive longer via evasive manoeuvring.

Similar to most German destroyers prior to rank III, the Type 1934A (1944) is equipped with basic 127 mm naval cannons, two at the front of the ship and the other two at the back. These cannons' damage per shot is not bad against targets at its BR range, but not that good either, requiring you to hit the enemy several times (usually 20 - 30 hits for destroyers) to sink them (thus somewhat inadequate at long ranges due to lack of stopping power). Fortunately, the gun has a very good reload time of just 4 seconds with ace crew, coupled with good shell velocity and accuracy. This makes the Type 1934A (1944) capable of continuously lobbing its shells into its target within a mid-to-close range (within 7 kilometers) into submission.

Secondary armaments consisted of seven dual 37 mm AA gun mounts (14 in total), two at the bridge and the second smokestack and three at the rear fighting compartment. These guns provided very deadly firepower at close range and good anti-air coverage.

In addition, the Type 1934A (1944) also features two twin 20 mm anti-aircraft mounts, one at the bow and the other at the rear compartment.

As with other German destroyers, the Type 1934A (1944) comes equipped with G7a torpedoes in two quadruple launchers. These torpedoes remain very deadly against any target the ship may face.

The Type 1934A (1944) is a potent support and brawling ship that excels at mid-to-close range combat. Although its 127 mm guns is somewhat inadequate against long-range targets, it is quite deadly at closer range thanks to its rapid rate of fire and good accuracy. This allows the ship to pick off important modules on the enemy ships (turrets, engines, bridge) and slowly killing them.

To complement its primary armament, the Type 1934A (1944) is also equipped with fourteen 37 mm guns as secondary armaments. These guns are very useful for occasionally setting enemy ships on fire, depleting the crew, and finishing them off. This gun is also useful for anti-air purposes, although it's advised to man the guns yourself when an enemy plane is getting close.

Due to its gun placement, the Type 1934A is able to aim and shoot two main guns with greater accuracy and still pack enough firepower to pick off important modules, moving in this position can make the ship more survivable, since not only the ship's profile is much smaller and harder to hit when bow on, this also prevent most enemies from damaging its unprotected engines and transmission.