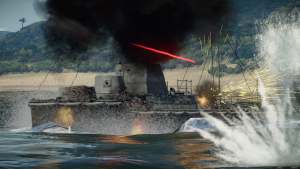 The Soukou-Tei (1927) has 6 mm of RHA protecting the turrets and the bridge, apart from this the hull is made up of the standard 6mm of steel. Overall, it's not very survivable at all, it does have some armour, but no enemy boats are going to struggle to get through it, cannons and heavy machine guns will have no trouble punching through. Additionally, because this vessel is so slow it is very easy to hit, as not much lead is required to land shots accurately, this artificially makes it less survivable than contemporary boats, despite the armour protection it has. It does, however, sit very low in the water, so this could lead to enemies missing a fair few shots at you if they're at the range, although like the majority of vessels around this battle rating use autocannons, it likely won't take very long for them to correct the range.

The Soukou-Tei has incredibly poor speed and overall mobility, it can reach a max of 26 kph in realistic battle modes, which is slower than the vast majority of ships in-game, on some of the larger maps this boat will take an unnecessarily long amount of time to reach combat ranges it can actually fight in, which can be tedious to play around. Its ability to turn isn't terrible but isn't overly impressive either, it's about as much as you'd expect from a vessel this slow. 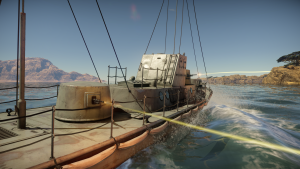 The Soukou-Tei also comes with two 6.5 mm machine guns, and these are close to being the least effective offensive weapons in the entire game. They can't penetrate the hull of any ships reliably past a few hundred meters and are limited to only being able to knock out exposed crew members, and even this is incredibly unreliable. The guns can only really deal reliable damage against aircraft, however, the guns cannot elevate past 25 degrees, meaning that if an aircraft is diving down to attack, these secondary guns will not be able to fire at them. 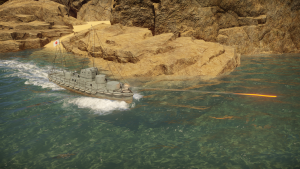