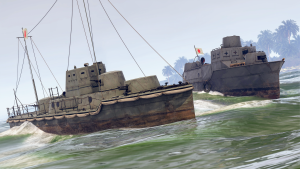 The Soukou-Tei-class (装甲艇, "armored boat"), or simplified as the AB-Tei-class, was a type of armoured gunboat used by the Imperial Japanese Army in the Second Sino-Japanese War and World War II.

These would be used in conjunction with an army naval landing as an escort to provide firepower and suppression cover for the landing. Armed with tank-like turrets housing machine guns and even tank-sized cannons ranging from 37 mm to 57 mm, these would prove very useful and successful for army landings.

A total of 56 boats would be completed. 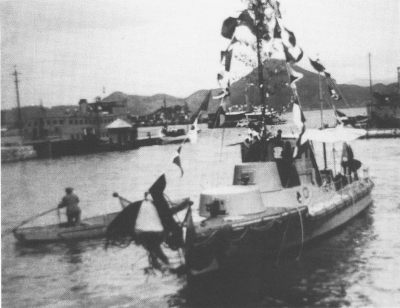 In the 1920s, the Japanese Army started development of a new amphibious assault landing fleet which included vessels such as: 14 meter Daihatsu-class Landing Craft, the world's first landing craft carrier (Shinshū Maru) and other auxiliary vessels. The AB-Tei-class was developed to provide close support for the new line of amphibious assault vessels and was supposed to be transported just like all the other landing craft.

In 1930, the second boat, Kachidoki (勝鬨, Battle Cry), was completed. It was enlarged from 14.4 metres to 20 metres with a 20 ton displacement, converted to a diesel engine, and its armament was upgraded to one 57 mm Type 90 tank gun and two 7.7 mm Type 89 'special' machine guns. In 1932, Kachidoki saw action during the landing operation at Shanghai during the January 28 incident where the Kachidoki fired upon Chinese coastal defences and laid smoke for the landing vessels, it proved very effective as only 2 soldiers died in the landing operation. 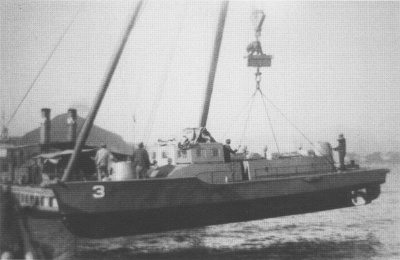 In 1933, the third boat got a hull revision to a size of 15.5 metres with 17.5 tons displacement with a new engine for a higher top speed and a more effective way of welding the hull decreasing its mass. It kept the same armament as Kachidoki. Armored Boat No. 3 (AB-3) was chosen as the final design and 23 additional boats were built (designated AB-4 through AB-26).

In 1937, the design was again changed increasing the length to 17.5 metres with 20 tons displacement which allowed it to load munitions or infantry and the speed increased to 14 knots; 10 boats of this setup were built.

In 1938, the model was scrapped for extra munitions or infantry load by shortening it to 16.5 metres and a second 57 mm tank gun was added; 11 boats of this setup were built.

In 1939, the final remodel took place. The boat was made lighter at 16.5 tons displacement by removing the second 57 mm tank gun without any additional changes; 19 boats of this setup were built.

As the Soukou-Tei was an escort boat for landing vessels, the Army also wanted develop a faster patrol boat to compete with American PT boats. Out of this need, the Type 4 Ka-Ro was developed.