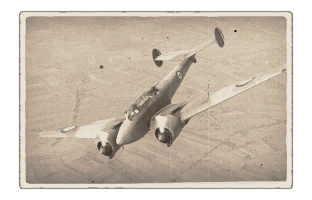 The Potez 633 can be outfitted with the following ordnance:

The 633's light bomb load (when compared to the Farman monsters that preceded it) makes this aircraft much more dependent on skill when dropping ordnance. When facing light vehicles, the 8x50kg load is particularly useful, allowing you to tag along with the larger bombers and clean up after their pass. Use the 7.5mm MG in the nose to clean up any stray SPAA trucks in your path... a short burst will usually be rewarded with a kill. Use the bombs on anything else that moves.

The 633 is also not as agile as other twin-engine aircraft its size, avoid turn fighting no matter how tempting. Just make a quick snapshot at passing fighters as they cross your path and keep moving to your next target. Keep an eye on your six, the rear gunner with the 7.5 mm MAC machinegun may deter lighter aircraft like Reserve fighters, but any rank II fighter which winds up on your tail usually means a one-way ticket to the ground in a heap unless a teammate is nearby who can help.

The Potez 633 was one of the numerous derivatives of the Potez 63. It was a light bomber, and it had a two-man crew: a pilot and a rear gunner. A contract for the production of 115 aircraft was awarded to SNCAN by the French Air Force. In 1938 though, it was decided that the light bombers had to have a crew of three, and the contract was cancelled. Nevertheless, the Potez 633 was offered for export with some success: Greece bought twenty-four aircraft, China bought four, Romania ordered forty and the Swiss air force bought one.

The Munich crisis showed that the French army lacked modern equipment and export war material deliveries were embargoed by the French government in June 1939. The Potez 633 built for export and not yet delivered to their customers were transferred to the French air force. These aircraft were used by ground attack units for pilot training until better aircraft could replace them.

In May 1940, at the moment of the German attack some ground attack units were still equipped with the Potez 633. These aircraft attacked the German columns, suffering heavy losses due to both enemy fighters patrolling the area and anti-aircraft fire from below.

Only thirteen Potez 633s were delivered to the Greek air force before the embargo. They accomplished reconnaissance missions over Albania during the Italian invasion, a few aircraft being downed by Italian fighters. Ultimately, all the remaining Potez were destroyed during the German invasion of Greece.

A total of twenty Potez 633s were delivered to Romania before the June 1939 embargo. These aircraft were reinforced by nine others handed over by Vichy France in 1941. They started their combat operations the day of the Romanian declaration of war to the USSR, in June 1941. The Potez 633s supported the Romanian ground forces, notably during the siege of Odessa and the battle of Stalingrad. In December 1942, the remaining aircraft returned to Romania, and they finished their careers as trainer aircraft for pilots training to be night fighters.