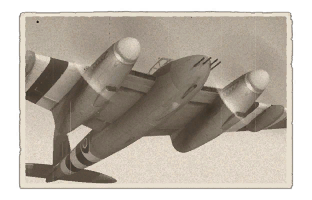 The Mosquito FB Mk XVIII is a rank III British twin-engine fighter with a battle rating of 4.0 (AB) and 3.7 (RB/SB). It was introduced in Update 1.39.

The Mk.XVIII, also known as the "Tsetse", was a converted Mk.VI "FB". In this aircraft, all four Hispanos are replaced with a single Molins 6-pounder Class M cannon (57mm). The cannon itself was a modified QF 6-pounder anti-tank gunm fitted with an auto-loader to allow for both semi- and full automatic fire.

The Mosquito FB Mk XVIII is armed with:

When used in Arcade Battles (AB), it is often best to find lone targets away from the main activity due to it's more specialized armament. Like the Mk.VI before it, the Mk.XVIII has no defensive armament; even a well-flown bomber may take you out. The 6-pdr can take out all three kinds of tanks (light, medium and heavy) as well as light pillboxes, the latter being the easiest as they are stationary. Line up your gun sights, aim centre and fire. The distance you fire from is up to personal preference, but a good starting point is 600m. Light tanks can be taken care of from any angle and medium tanks can be dealt with from the sides and rear, but aiming at their front may cause bounces and is not a guaranteed kill. Heavy tanks are like medium, but a frontal attack is most certainly going to bounce this time. Don't forget that the tanks will be actively moving, which means that you will have to correct for horizontal accuracy as well. A good way to practice this is to jump into a custom game and practice on people driving tanks, as they can be harder to hit then a AI controlled vehicle.

In Realistic Battles (RB), as with AB, you want to try and find some targets away from the main action. This process can be easier in RB and Simulator Battles (SB) as there are usually fewer people and the spotting distance of player-controlled aircraft is reduced. Stick down low and use the terrain to your advantage. Learn to fly low and fast, weaving up and down hills and valleys.

The same tactic applies with SB, but you are confined to the cockpit.

Some tips for taking off in both RB and SB: In RB, apply flaps to take off and set 100% throttle (not WEP). Around 100kph/60mph, level the nose down parallel to the ground and wait until you reach around 200kph/120mph. At this point, gently pitch up and you should slowly ease into the air. As for SB, apply throttle little by little and some counter steer to the right as torque from the engines will try to turn you to the left. Follow as with the RB take-off and bring the nose parallel with the ground around 100kph/60mph and pitch up a little once you reach 200kph/120mph to ease into the air.

The main role of the "Tsetse" was that of anti-shipping and anti-submarine, attacking Axis ships upon orders or while on patrols. When performing an attack run, the "Tsetse" would dive at 30º from 5,000ft (1,500m), however, the auto-loading system was prone to jamming if the plane moved during the attack run. Carrying 25 solid AP rounds, it could fire them at a rate of 55 a minute, running dry in just under 30 seconds. As a result, pilots would fire a burst of 3 to 4 shells before circling around for the next target, also because they risked the ships returning AA fire. Fortunately, the "Tsetse" was fitted with 900lbs (410kg) of additional armour to the engine cowlings, belly and under the cockpit for added protection.

Throughout its service, the "Tsetse" performed very well; the effectiveness of the new weapon was demonstrated on 10 March 1944 when Mk XVIIIs from 248 Squadron (escorted by four Mk VIs) engaged a German convoy of one U-boat and four destroyers, protected by 10 Ju-88's. Three of the Ju 88s were shot down. Pilot Tony Phillips destroyed one Ju-88 with four shells, one of which tore an engine clean off its wing. The U-boat was damaged. On 25 March, U-976 was sunk by Molins-armed Mosquitoes. On 10 June, U-281 was abandoned in the face of intense air attack from No. 248 Squadron and was later sunk by a Liberator of No. 206 Squadron. On 5 April 1945, five German surface ships in the Kattegat were attacked and again, the "Tsetse" demonstrated their value by setting them all on fire and sinking them, a German Sperrbrecher("minefield breaker") was lost with all hands, with some 200 bodies being recovered by Swedish vessels. Some 900 German soldiers died in total. On 9 April, German U-boats U-804, U-843 and U-1065 were spotted information heading for Norway. All were sunk. U-251 and U-2359 followed on 19 April and 2 May 1945.

The de Havilland Mosquito was a twin-engine fighter-bomber which entered service with the RAF in 1941. Powered by two Rolls-Royce Merlin engines and constructed almost entirely of wood, the Mosquito possessed remarkable handling characteristics and performance for an aircraft of its size. Initially intended for use as a fast bomber and reconnaissance aircraft, early variants of the Mosquito carried no defensive weapons so as to save weight; the aircraft’s defense was its incredible speed and acceleration.

The Mosquito FB Mk.XVIII was unlike any other variant in that it was fitted with a 57mm anti-tank cannon in the nose; sources differ in the opinion of whether this was originally intended as an anti-tank or anti-submarine platform, but it was in the anti-shipping role with RAF Coastal Command which the Mk.XVIII would find most success. The 6-pounder cannon came to be known as the Molins gun; Molins were a company who had produced machinery for the cigarette industry in the inter-war period – they were able to adapt some of their designs to provide an auto-loading mechanism for the gun within the tight confines of the Mosquito’s nose. Either two or four 0.303 machine guns augmented the Molins gun, and extra armour was added to protect the engines and aircrew. The Mk.XVIII came to be known as the ‘Tse-tse’ by its crews, named after the notorious African Tse-tse fly as described by one pilot who commented ‘the tse-tse’s bite was rather nastier than a normal Mosquito’.

The standard attack profile for the Mk.XVIII involved entering a shallow dive from 2500-3000’, aiming at the target vessel’s waterline so that damage would not only be caused on impact, but also below the waterline on the far side of the vessel on exit. With the aircraft’s speed already in excess of 300 knots whilst in the dive, the shell’s velocity was one of the highest in service. The Tse-tse Mosquito entered service in 1944 and achieved notable successes as part of the Banff Strike Wing operating from the East coast of Scotland against axis shipping around the coast of Norway.

Isolated examples do exist of the Molins gun being used in the air-to-air role, with predictably spectacular results. Only some 45 Mosquito FB Mk.XVIIIs were produced, some converted from the 20mm cannon armed FB.VI.