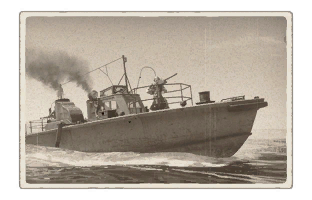 The Model 2 is not an overly survivable vessel, but slightly more so than other small Japanese boats. It has 13 crewmembers, while most other MTBs and sub chasers in rank I have 7 or 10 crewmembers, so it can take a few more hits than most other contemporary boats. Like many of the other small Japanese boats this vessel is unarmoured, only protected by the 8mm of steel making up its hull. The only advantage it has survivability wise is that its engines are fairly small, so it's possible to still retain propulsion while taking fire, however a few well placed high calibre HE shots or a few magazines of cannon fire will still sink the Model 2.

The Model 2 doesn't have the most impressive top speed, (48 kp/h) in RB mode, but its manoeuvrability isn't terrible, it can perform turns and react fairly well, all the while not losing a huge amount of speed from performing maneuvers, this allows the boat to consistently be able to avoid potential danger if it's noticed early enough. Its lack of speed doesn't really hurt the Model 2 much, it's a more defensive vessel and has enough potential speed to reach some effective spots on the map without too much trouble.

The Model 2 uses the Type 4 37mm naval cannon as its primary weapon, it has a relatively quick reload but an overall unimpressive damage output. It has access to two types of ammunition.

The Model 2 is equipped with a single 20mm Type 98 cannon for its secondary weapon. It has a limited firing arc and can only engage enemy vessels from the sides or rear of the boat. Despite this, its a modestly powerful weapon and more reliable than the primary 37mm gun. It works well at close range, and can function adequately up to around 1500 meters, but at this distance it will struggle to do a lot of damage. The magazine contains 20 rounds and reloads very quickly, allowing for a steady stream of fire against enemy vessels or aircraft. It comes with three belts- 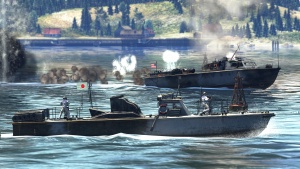 The Model 2 can carry ten Type 95 depth charges, which can be dropped to maim other naval targets, they have rather limited viability though as most MTBs will be able to outrun the explosion, however they are useful for attacking larger ships, as if you can reach them unnoticed one or two of these depth charges will sink the vessel.

The Model 2 works best in a more defensive role. As its forward facing primary weapon is inconsistent, and its 20mm secondary is only able to fire at the sides and the rear, aggressive rushes wont be largely effective, as it's very likely you'll run into enemies in blind spots and the few seconds it takes manoeuvring to get your guns on target could very well be fatal. To counter this lack of versatility regarding firepower, hanging around islands or even staying stationary close to the corners of sightlines or cover is a good option, as this allows you to prepare your guns firing angles so that any enemies coming into sight can be reliably fired upon. Your 20mm is your most reliable weapon at taking on enemy boats, always remember to flush the remainder of your magazine after an engagement so you can engage the next enemy with a full magazine, as you're going to want to do as much damage as possible as quickly as possible. Try to avoid open sight lines and stick to cover, as this will allow you to escape from sight and reengage at a more convenient angle. Your speed isn't the most impressive, so try and avoid rushing far into the map, as you'll lack the speed to retreat fast enough, and you'll likely run into fast enemy boats out of cover, where they will be able to out manoeuver your guns; play with a defensive mindset and you should get some good results. 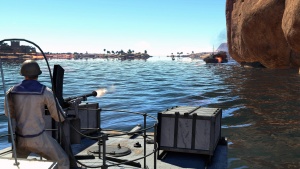 The Karo-Tei Type 2 sub-chaser was developed in the later stages of WW2 and commissioned into service in 1944. The vessel's primary task was to protect the Japanese naval bases at Okinawa and the Philippines from light allied assaults and submarines in particular. The vessel only saw limited use due to the ever worsening war situation for Japan at the time.