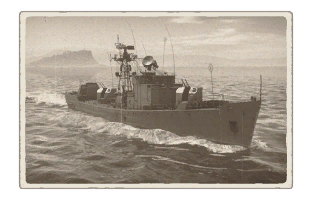 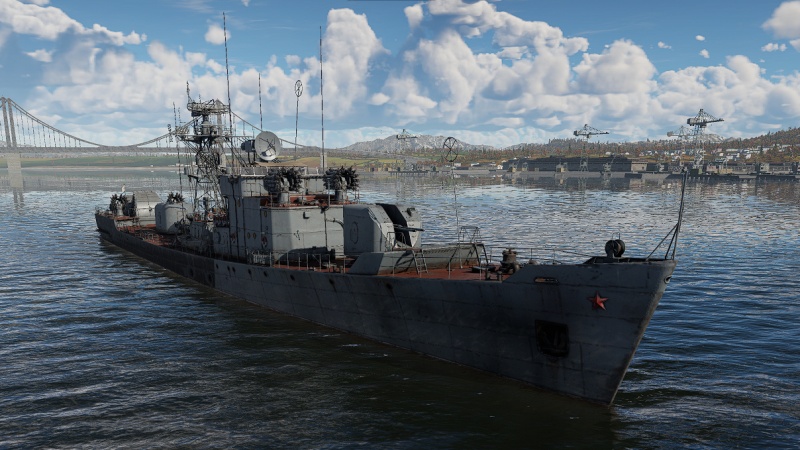 Being a light anti-submarine frigate, the Pr. 35 Mirka-class has very little substantial armour, with just 5 mm turret armour and the 15 mm splash guard for the forward turret. While these may minimize damage caused by small calibre HE rounds and splash damage from other areas being hit, they will not protect the turrets from direct fire starting at even the size of 12.7 mm machine guns. General survivability is not much better, as the primary armament is limited to two large turrets. Losing turrets is common on the Mirka and will result in your fire being halved at the least. Furthermore, the low crew count of 98 means that a very low damage threshold can be sustained on major components before the ship is destroyed. Thankfully, the Mirka has a few aces up its sleeve to counteract these issues. To begin with, the crew are very spaced out in the ship, meaning that you will most likely survive the first few salvoes. Secondly, because the hull has such a low freeboard for the majority of the ship, most of the machinery and ammunition is protected by the sea.

Overall, the ship's survivability is below average, with its low crew and few turrets being the brunt of the issue.

Mobility is a very strong suit of the ship. Starting at 57 km/h stock, the ship lags behind destroyers and most cruisers, and cannot hold a candle to the late-game MTBs that it might face. However, of the Corvette/Frigate class, the Pr. 35 has a distinct advantage, often holding a 10 km/h advantage or more over other ships of its size. These are rarely faced, however, and as such, it cannot be expected that you will ever be leading the charge in matches. The turn radius of the ship is reasonable, however, the initial snap can be very deceiving when initiating a turn. One major issue when manoeuvring the Mirka is the existence of the hull-mounted Sonar system. This dips far below the keel of the hull and can frequently be caught on rocks. Special attention must be given when manoeuvring around shoals and beaches where the Sonar might holdfast.

The primary armament of the Pr. 35 is where the ship shines. It is armed with a pair of AK-726 76 mm semi-automatic gun turrets. Each of these turrets contains two guns, firing a total of 90 rounds per minute. This rate of fire allows for the ship to dismantle any opponent vessel in seconds, from MTBs all the way up to destroyer leaders and light cruisers. These guns have very nice post-penetration effects on targets lacking armour and can be extremely dangerous should you sneak up on someone. This rate of fire comes at a price, however, and that price is two-fold. Firstly, the guns overheat quickly, barrages tend to be limited, and the guns must be watched for overheat. Secondly, the shells have a relatively short range and their effectiveness drops off quickly beyond 5 km when shells begin to miss and fire arcs become too great to regularly hit the target. 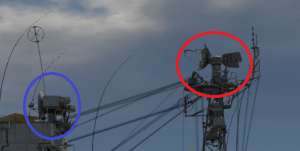 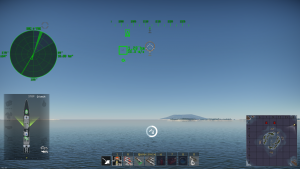 Captains of the Mirka should attempt to close the distance on any target and engage with their guns within 5 km for maximum effectiveness, reserving torpedoes and rockets for extreme close quarters or emergencies. Prior to unlocking HE-VT, Mirka lacks in anti air capabilities but thanks to targeting radar, Mirka can engage targets with relative ease. The HE-VT once unlocked should be the primary armament, due to a slightly greater explosive mass and better effectiveness against planes. The rocket launcher has no anti-submarine use in game but provides an instant knock-out when fired at a small vessel, it can also be used as rudimentary artillery to fire above obstacles due to the flying arc. They can be used to engage targets at distance but the recommended engagement distance should be at 3km, this is to compensate travelling speed. Torpedoes, while limited firing arc, are your main weapon against heavily armoured vessels like HMS Belfast, two of them will disable the cruiser. Rockets can also be used against them since, thanks to the high explosive power, they can lit on fire all cruisers when fired at engine compartment. They will also cripple or destroy main weaponry that the 76 mm cannons may not penetrate.